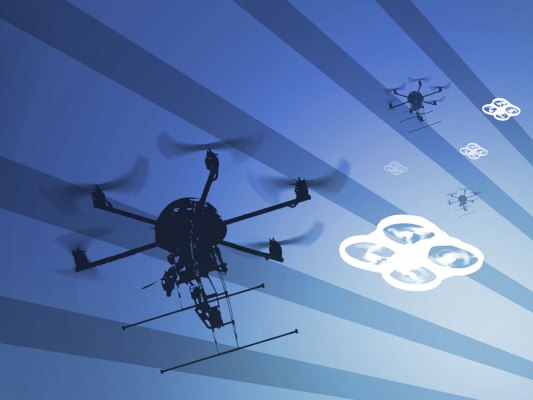 Is the dystopian future of shoestrong budget weaponized drone attacks here already? The BBC and AP are reporting claims by the Venezuela government of an assassination attempt on its president using a couple of drones carrying explosives.

President Nicolás Maduro was giving a speech at a military event in Caracas which was being screened live on television when the incident occurred.

Footage of the speech on the BBC website shows the president, flanked by military generals and with his wife also standing alongside, being interrupted mid-flow by what appears to be a blast from above them.

The people in the shot react by looking startled and looking up. The audio to the video cuts out before the blast can be heard.

Footage of the incident from a different camera angle showing a panorama view of a military parade at a standstill during the speech, does include the sound of a blast. Afterwards people can be seen pushing into and then running into the frame. The soldiers break rank in panic and the sound of screams can be heard.

Venezuela authorities have reported that seven soldiers were injured in the incident and several people were later arrested. Communications minister, Jorge Rodriguez, said two drones loaded with explosives went off near the president’s stand.

In a national address later, Maduro said: “A flying object exploded near me, a big explosion. Seconds later there was a second explosion.”

However there has been no independent verification that explosive-carrying drones were the cause of the blast. And a report by AP cites firefighters at the scene of the blast disputing the government’s version of events.

It reports that three local authorities said there had been a gas tank explosion inside an apartment near the speech and where smoke could be seen streaming out of a window. But AP adds that they provided no further details on how they had reached that conclusion.

There has also been an unverified claim of responsibility for an attack using drones.

The BBC and AP report that a little known group called Soldiers in T-shirts has claimed on social media that it planned to fly two drones loaded with explosives at the president but that government soldiers shot them down before they reached their target.

Both news organizations say the group did not respond to attempts to contact it.

Venezuela’s president has blamed Colombia for the attack — an accusation that has been refuted by the neighboring state as “baseless”.