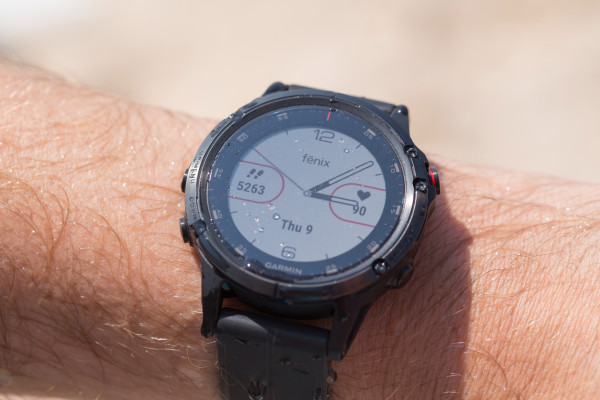 I was wrong. Several years ago I reviewed the first Garmin Fenix 3 smartwatch. This was before the release of the Apple Watch. That’s key to this story. I declared Garmin would have a hard time selling the Fenix 3. The Apple Watch would be better in every way, I pointed out. Therefore, there would be little reason to buy the Fenix 3.

But here I am, in the middle of the woods, wearing the fifth generation of the Garmin Fenix while my Apple Watch sits at home on my desk.

In some ways I was right. The Apple Watch is better by most measurable attributes: there are more apps, the screen is superior, there’s a vibrant accessory market, and it’s thinner, faster and cheaper.

The Garmin Fenix is big, clunky and the screen looks like it’s from a Kindle. It’s not a touchscreen nor does it have the number of apps or band options of the Apple Watch. I like it. To me, the Garmin Fenix is akin to a modern Casio G-Shock, and that’s what I want to wear right now.

Smartwatches are often reviewed like phones or vacuums. Specs are compared, and conclusions are drawn. Wearability is talked about, and functions are tested. If the watch has a swimming option, take it in a pool never mind the fact the reviewer hasn’t done a lap since high school.

I started out doing the same thing with this Garmin. I took it kayaking. I had kayaked twice in my life, and dear reader, I’m here to report the watch performed well on this kayak trip. The watch has topography maps that novel though not useful since the river. It has a cadence beat to help keep strokes consistent. I tried it all. I ended up drinking a lot of Michigan beer instead of tracking the performance of the watch. Sorry.

Still, performance matters to a point.

Here’s my OG review of the Garmin Fenix 5: The watch is significant even on my wrist. The screen is underwhelming though it’s always on and visibility improves in sunlight. The buttons have great tactical feedback. The watch is waterproof to the extent it survived a flipped kayak and hours in Lake Michigan. The battery lasts nearly a week. The watch does not know when it’s on or off the wrist, so notifications will cause it to buzz while it’s on your nightstand.

But most of that doesn’t matter. The Garmin Fenix 5 is exceptional, and I love wearing it.

Smartwatches need to be reviewed like ordinary watches. I need to explain more about how the watch feels rather than what it does or how it works. At this point, several years into smartwatches, it’s not notable if the smartwatch with a smartwatch. Of course, it tracks steps and heart rate and displays select notifications from my phone. If those items work then, they’re not important in a review.

Take a Citizen Skyhawk line. It packs a highly sophisticated complication that’s designed, so the maker says, for pilots. Ball makes a lovely line intended to provide accurate timekeeping for train conductors. There are watches for high magnetic fields, tactical operators, racer car drivers and, of course, countless for divers. Here’s my point: The vast majority of these watches are not used by divers or train conductors or fighter pilots.

This Garmin Fenix watch, much like the Apple Watch or Rolex diver, can be an aspirational item. It’s like the juicer in my kitchen or rowing machine in my basement. I got it because I wanted to be a person who woke up and juiced some veggies before my workout. I haven’t used either in months.

Smartwatches are different from smartphones and need to be reviewed as such. This Garmin Fenix watch has many modes I would never use, yet I love the watch. There’s a base jumping mode. I’m not jumping off a cliff. There’s a tactical mode and a golf mode and an open water mode, and I have no desire to be in situations where I need to track such activities. But I like the thought of having them available if I ever wanted to monitor my heartbeat while shooting targets.

The smartwatch industry is approaching a point where features are secondary to design. It’s expected that the watch will track steps and heartbeat while providing access to various features. It’s like the time and date of a regular watch. Past that, the watch needs to fit in a person’s aspirations.

Everyone is different, but to me, this is how it is laid out: The Apple Watch is for those looking for the top-tier experience regardless of the downsides of constant charging and delicate exterior. Android Watches are those looking for something similar but in a counter-culture way. The Samsung’s smartwatch is interesting and with the new Galaxy Watch, finally reaching maturity.

There are fashion smartwatches with fewer features but designs that make a statement. That’s where this Garmin watch lives and I’m okay with it. Fossil and Timex watches live here too. Using the Apple Watch as a standard, some of these fashion watches cost more, and some cost less, but they all say something an Apple Watch does not.

I’m bored with the Apple Watch, and right now I’m into thinking I live the type of life that needs a smartwatch that tracks every aspect of a triathlon. I don’t need all these features, but I like to think I do. I also don’t need to have a GMT watch with a third timezone, and I don’t need a watch with a hacking movement hand as if I need to synchronize my watch with other members of my special forces squad. But I have those watches along with dive watches and anti-magnetic watches. I’m not alone. The watch industry has long existed on selling lifestyles.

I was wrong before. The Apple Watch isn’t better than this Garmin or most other smartwatches— at least it’s not better for me right now. Maybe two weeks from now I’ll want to wear an Apple Watch and not because it’s better, but because it makes a different statement.