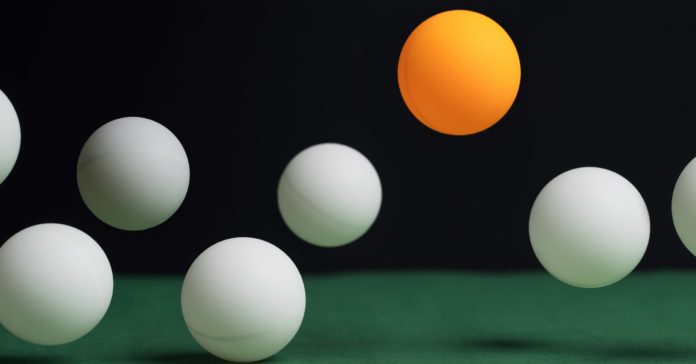 Everyone already knows that you are carrying around a computer in your pocket. But your smartphone is more than just a computer—it’s also a data collector. I’m going to guess that yours can measure acceleration, magnetic field, sound, location, and maybe more. Many phones also can measure pressure. Oh, and some phones can even make phone calls.

With all of those sensors available, I’m going to go over three fun experiments you can do with your phone. These will probably work on just about any smartphone—and you can probably use a variety of apps to collect the data. For these examples, I’m going to stick with phyphox (http://phyphoxorg). There have been lots of data collecting apps—but this one is the best I’ve seen lately. Also, it’s free and runs on both iOS and Android. Check it out.

Get a small ball—actually, the size doesn’t really matter. There are only two things that the ball needs to do for this experiment: It needs to bounce and it needs to make a noise when it hits the table (or whatever surface it hits). That’s it. Now start up your phyphox (pronounced fi-fox) app and open up the experiment file “(In)elastic collision.” Place your phone near the location that the ball will hit the surface so that the microphone can pick up the sound. Start recording and drop the ball.

The app then records all of the times the ball hits the ground. It’s pretty cool. The app also uses the time between bounces to calculate the bounce height (I suppose the calculation assumes you are on the surface of the Earth with a vertical acceleration of 9.8 m/s2).

Just for fun, here is a plot of bounce height vs. bounce number for a small metal ball bouncing on my lab table.

But now that data is super simple to collect—you can explore the relationship between initial drop distance and bounce height for a wide variety of balls. What changes for each successive bounce? Does it lose the same height or the same energy? In case you are curious, this is something I looked at some time ago (more details).

Measuring the Speed of Sound

Although it’s fun to come up with your own experimental method to determine the speed of sound—here is a method that works fairly well using two smartphones. You need to run something that will act as an acoustic stop watch (phyphox has one). The acoustic stop watch is just like a normal timer. The only difference is that it starts and stops the timing based on a loud sound—like a clap.

So here is how this experiment works. Take two phones and put them a known distance apart—I used my 12 foot tape measurer to set the distance (further is better, but both phones need to be able to hear the same sounds). Let’s call these two phones phone-A and phone-B. Next, someone needs to clap next to phone-A to start both timers. Of course since phone-B is a little farther away, it will start slightly later. After some short time interval (doesn’t really matter), someone claps next to phone-B stopping both phones but stopping phone-B first.

Here’s how it works. Phone-B starts a little bit later—as I said. Now when the clap is near phone-B it essentially stops right on time. However, phone-A starts late because of the distance sound has to travel. The two phones record two different time intervals. The difference between these time intervals is the time for sound to travel from A to B and back from B to A.

Now for the calculation. The speed of sound will just be twice the measured distance between the two phones (for there and back sound) divided by the difference in time intervals.

Now for my data. With a distance of 12 feet (3.66 meters) and the two time intervals of 2.047 seconds and 2.029 seconds, I get a sound speed of about 407 m/s. This is wrong—but only slightly wrong. The accepted value for the speed of sound should be around 343 m/s (depends on temperature of the air and stuff). But I’m OK with my value—it was just a quick setup. I think you could play around with this and see if you could get an even better answer. What if you did it outside with a greater distance (and louder noise)? That would be fun to try.

Determining the Height of a Building

Yes, I know the previous two phone experiments used the microphone—and even a traditional analog phone has a microphone. But what about a barometer that measures the atmospheric pressure? Yes, many smartphones now have this sensor—the reason is probably to help the GPS to get a better location. The GPS doesn’t do as well with altitude, so the barometer gives a little better reading based on the change in air pressure.

But this change in air pressure can also be used while you take ride up (or down) in an elevator. I’ve done this before in a nice elevator, but I decided to do it in a crappy two-story elevator too. Using the phyphox app, it records the change in pressure and with that calculates the height as a function of time. It also records data from the accelerometer to calculate the velocity as a function of time (assume the elevator starts from rest).

Here is the data from the crappy elevator run.

Just knowing the height of the building is pretty cool—but how about a homework problem for you? Use the position-time data to calculate the elevator velocity and compare that to the velocity from the acceleration data. They probably won’t give the same results since the barometer doesn’t give pressure readings super fast—but it will still be fun.

Are there more experiments? Of course! But that’s enough to get you started for now.

Pinterest puts an IPO on its pinboard, hiring Goldman Sachs and...

GizmoCrazed - January 30, 2019 0
Pinterest, the 11-year-old, San Francisco-based site known for the photos its users post about everything from wedding to beauty trends, has hired Goldman Sachs...

Bust your Blackheads with the Blackhead Extractor Tool

Self-driving scooters and bikes? Uber's working on it.

SantaCon is back to make you regret moving to the city