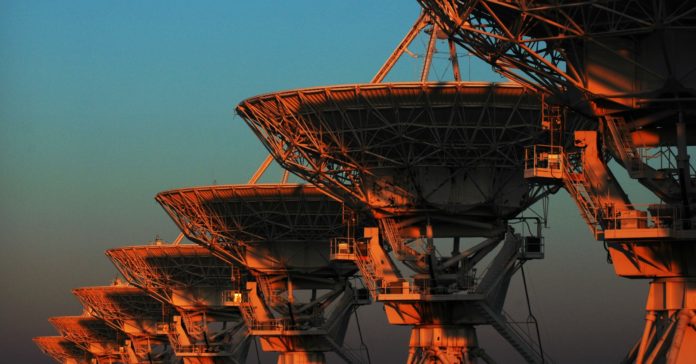 In the early 1930s, Bell Labs was experimenting with making wireless transatlantic calls. The communications goliath wanted to understand the static that might crackle across the ocean, so it asked an engineer named Karl Jansky to investigate its sources. He found three: nearby thunderstorms, distant thunderstorms, and a steady hiss, coming from … somewhere.

Jansky studied the hiss for a year, using a rudimentary antenna that looked like toppled scaffolding, before announcing its origin: The static was coming from the the galaxy itself. “Radio waves heard from remote space,” announced The New York Times in May 1933. “Sound like steam from a radiator after traveling 30,000 light-years.” Janksy had unwittingly spawned the field of radio astronomy.

Today, a replica of Jansky’s scope sits on the lawn in front of Green Bank Observatory, one of the four world-class public radio telescopes in the US. Along with the Very Large Array, Arecibo Observatory, and the Very Long Baseline Array (VLBA), it is the legacy of a boom time in federal investment in the field that began in earnest after World War II.

In the past several years, though, the National Science Foundation has backed away from three of those instruments. In 2012 the NSF published a review recommending that the foundation ramp down funding to Green Bank—just 11 years after it was finished—as well as the VLBA, which can resolve a penny from about 960 miles away. Three years later, the foundation asked Arecibo for management proposals that “involve a substantially reduced funding commitment from NSF.”

Now, the future of those scopes—instruments that map the gaseous threads that connect cosmic neighborhoods, penetrate the dust shrouds surrounding not-yet stars, and probe way-warped spacetime—is in question. “Radio astronomy is really, really unique in the kinds of astrophysics that we can study,” says Brian Kent, an astronomer at the National Radio Astronomy Observatory.

That work is far from stopping. But support for pure science in the US is always complicated, since it relies on the good graces of federal agencies and annual budgets. As funders balance building and operating new scopes with the old, while giving grants to the astronomers who actually use those instruments, something’s gotta give. And no matter what it is, the science will not be the same.

Building massive radio telescopes—which today cost anywhere from around $100 million to more than $1 billion—actually began as a cost-sharing measure. In the 1950s, the nascent radio astronomy community realized universities couldn’t afford to build their own scopes—at least not ones of high enough quality to drive the field forward. So in 1956, the United States formed the National Radio Astronomy Observatory, building a succession of telescopes in Green Bank that it could loan out to scientists from around the country. In Puerto Rico, construction on the 300-meter Arecibo observatory began in the 1960s, and it became the National Astronomy and Ionosphere Center. In the 1970s, the NRAO started building the Very Large Array in New Mexico.

Most recently, NRAO helped create the Atacama Large Millimeter/Submillimeter Array, or ALMA, in Chile. It cost more than a billion dollars to build, with the NSF contributing around $500 million, and another approximately $40 million per year to operate it. But it’s worth it: In US astronomy, interferometers, or telescopes like ALMA made of many smaller antennas, are currently more popular with scientists than big single-dish scopes, says NSF astronomy division director Richard Green. “We really try to be responsive to community interest,” he says. Interferometers provide higher resolution—crisper pictures of smaller areas—and can investigate many of the same celestial phenomena.

Giant single dishes do still hold astronomers’ interest—especially those that want to map large gassy portions of the sky, find and monitor pulsars, and catch the faint emissions that interferometers, which are less sensitive, can miss. Still, when push came to budget cut, the big single dishes, Arecibo and Green Bank, were the ones to go.

Now, as the NSF gradually decreases funding to Green Bank and Arecibo, the observatories have had to solicit support elsewhere—primarily through pay-to-play private partnerships. A SETI project and a collaboration of pulsar astronomers searching for gravitational waves are helping to keep Green Bank afloat. The Russians are ponying up to communicate with their science spacecraft. And the VLBA has netted Navy money, partly to keep track of Earth’s tilt.

This, a different kind of cost sharing, is a business model the agency can turn to to keep older telescopes online. The NSF still, for the moment, funds part of their time—“open skies” hours available to anyone’s good ideas; the rest of the time, the scopes are subject to their customers’ whims. That’s the trade-off right now, says Joseph Pesce, NSF’s program director for NRAO (NSF split Green Bank and the VLBA off from the observatory in 2016). “We are able to keep the facilities running,” he says. “That’s a good solution to this problem.”

There is a new facility potentially on the horizon: The Next-Generation VLA (the VLA itself, while upgraded, is 40 years old). As currently envisioned, the ngVLA’s many antennas will together have 10 times the sensitivity and resolution as the VLA, at a wider range of frequencies. The primary array will have 214 18-meter antennas, spiraled across New Mexico, Texas, Arizona, and Mexico. Nineteen smaller ones will sit close to the center, and 30 18-meterers will constellate the continent.

With the ngVLA, the hypothetical instrument’s project scientist Eric Murphy says astronomers could make high-def movies of solar systems as they come together—something previously out of reach because the dust surrounding the baby planets obscured their birth, and because radio images weren’t sharp enough. They could capture the collisions that cause gravitational-wave events, up to 650,000,000 light-years away. They could find more molecules that precurse biology in still-forming star systems.

The conditional tense, though, is key. Before it can be realized, a committee has to deem it important in the 2020 Decadal Survey, a priority plan that astronomers make every decade. If it gets a high ranking—and then funding—construction would start around 2025.

But it’s expensive: $1.5 billion just for construction, of which the US would pay half, and $75 million a year to operate. For comparison, Green Bank cost about $135 million in today’s dollars to build and costs around $10 million to operate. “It might all get shot down tomorrow, but for now, it’s fun,” says Murphy.

If it does get shot down, he says, the team could scale the plans back or just keep running the VLA. At the other sites, members of the radio astronomy community are helping make older telescopes new again: They are developing a new Arecibo receiver that would game-change its view, and a Green Bank collaboration is working on a receiver called Argus+ to make, among other things, fast, detailed maps of molecules in galaxies and places where new stars are forming. In 2011, the VLA got a $94 million electronics upgrade and a new name that no one uses: the Expanded Very Large Array. “But 40-year-old dishes become 50 years old,” says Murphy, “and things become more difficult.”

In a hypothetical future in which the US has a 50-year-old VLA—and a partially or fully privatized Green Bank, VLBA, and Arecibo—American radio astronomers will have less they can do from their own backyard. “There is only one Green Bank; there is only one Arecibo; there is only one VLA,” says Kent. “Without those facilities working together in concert, we don’t have the kinds of tools scientists, engineers, and educators need.”

But radio astronomers—always kind of a scrappy, rogue element within the cosmic establishment—will likely continue to find ways to keep their telescopes open, operating, and updated. It’s part of their scientific heritage.

See, after Karl Jansky did his phone project, Bell didn’t care so much about this astronomy stuff. The lab moved Jansky on to other projects. But in Wheaton, Illinois, a guy named Grote Reber became obsessed.

In his backyard, Reber began to build his own radio telescope. Its dish, completed in 1937, was 31 feet across—a length dictated by the boards available at the local hardware store. He published the first map of the galaxy’s radio emissions, a contour plot that looks like a sky cephalopod. For around a decade, Reber was the world’s only active radio astronomer.

When the National Radio Astronomy Observatory started up, in the 1950s, it bought Reber’s telescope and relocated it to Green Bank, right across the street from Jansky’s duplicate—a reminder to support each other’s science in the face of establishment adversity or ambivalence.