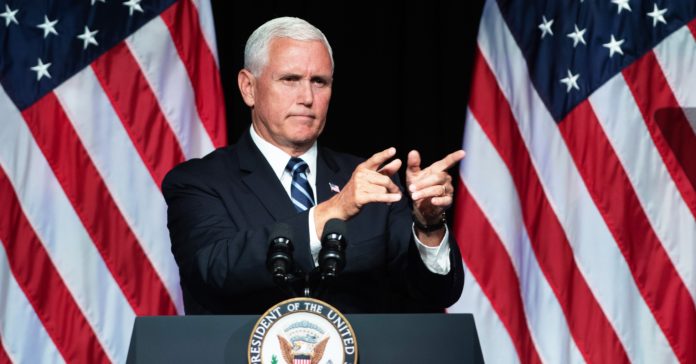 But can that really happen? Well, let’s proceed with the go/no-go. SPACE FORCE!

“The time has come to establish the United States Space Force,” Pence said in his speech, asking for $8 billion to build out the idea. So that’s a GO.

“We are glad that the Pentagon is finally taking these steps in enhancing our space strength,” said in a joint statement from Representatives Mike Rogers of Alabama and Jim Cooper of Tennessee, the ranking and minority leaders of the House Armed Services Subcommittee on Strategic Forces. They’re authors of a bill to create a Space Force as a sixth branch of the US military. So … GO.

“We’re still putting it together,” Defense Secretary James Mattis told reporters earlier this week. “We have the direction from the president and we are underway.” (Mattis has, in the past, opposed the idea.) So … GO? Ish?

It sure sounds like we’re go for liftoff. Pence’s speech was a lot more formal that the apparently impromptu idea Trump floated in June. Today the administration announced that the Pentagon would establish not only a new military Space Command but also a Space Operations Force, drawing together the people with space-related responsibilities across the Department of Defense, and a Space Development Agency to streamline the acquisition of military space equipment—primarily, it seems, satellites and the ground hardware that goes with them. The Pentagon can do all that. But only Congress can create a new branch of the military, and a Space Force would be the first since the Air Force became a full, separate branch in 1947. It’d be a big deal.

It’s also a bureaucratic challenge, and the orders to do it come at a chaotic time across government—fights over trade, farm bailouts, skyrocketing deficits, tax reductions aimed mostly at the wealthy, ethics scandals—and midterm elections in less than four months in which many polls have the president’s party on its back foot.

Into that mix the president has managed to make the idea of a Space Force seem sillier than it might actually be. On Thursday, hours after the Pence speech, the Trump campaign (for president, in 2020) blasted a fundraising email asking for people to vote on a new Space Force logo, for example. One of the options says “Mars Awaits,” as if … well, as if Mars awaits.

But the idea of orbital military operations didn’t start with Trump. Just about a decade after the Air Force became a separate military branch, its chief of staff General Thomas White started talking about “aerospace,” asserting that in a future of satellites and intercontinental ballistic missiles, the Air Force’s jurisdiction was “a seamless continuum stretching from the earth’s surface to infinity,” as a RAND book on the subject puts it.

And in 2001, the Commission to Assess Unites States National Security Space Management and Organization published the report named after its chair Donald Rumsfeld—before he became Secretary of Defense for the second time. The “Rumsfeld Report” warned that the US was disproportionately invested in and dependent on space assets—so much so that the nation was vulnerable to a “space Pearl Harbor.” Even then, two decades ago, the report recommended a “space corps” and a rearrangement of the ways the military procured space-related equipment.

A lot of reports since then have said the same. “They all come down to the same thing: Fragmented leadership and an inability to get the industrial base incentivized,” says a staffer for the House Armed Services Subcommittee working on the issue. Today, the staffer says, it takes up to two years to get a request for new gear out to industry, by which point the technology has moved on.

So couldn’t the Air Force handle it? The USAF does indeed operate a lot of flying things, and today it’s responsible for the vast percentage of space-related military functions, like GPS and the ultra-classified X-37B long-duration space plane. Indeed, some commentators (like a former Air Force secretary and some defense analysts) suggested that while the policy goals of a Space Force might make sense, the actual functions could just as easily fall to the existing Air Force infrastructure. (Helpfully, that wouldn’t require that anyone get a new uniform.)

On the flip side, air and space are as different operational regimes as air and water. As the RAND book has it, space operations are by definition global, with no restricted airspace. Spacecraft are less maneuverable and take longer to get on station than aircraft. And with a handful of exceptions, space is uncrewed, the domain of robot cameras and transceivers. As far as anyone without a top secret clearance knows, anyway. “Are there going to be naysayers? Yes. There is, I think, a tendency for people to trivialize this because they don’t understand the technical nature of the problem,” the Armed Services Committee staffer says. “That’s a consequence of things being really classified in the the space world, which is painful for us to deal with, and it being so abstract that people are not focused on the details.”

It’s also true that the US’ main international adversaries have been leaning into military space. China intentionally blew up a satellite in 2007, and Russia created its own Aerospace Force in 2015. “Both Russia and China continue to pursue anti-satellite (ASAT) weapons as a means to reduce US and allied military effectiveness,” Director of National Intelligence Daniel Coates told the Senate in February. “We assess that, if a future conflict were to occur involving Russia or China, either country would justify attacks against US and allied satellites.”

All of which makes SPACE FORCE! a question of priorities and money. Military procurement is a mess. Whether that’s worth a massive bureaucratic restructuring of the Department of Defense and $8 billion will be up to a Congress in the middle of a political wildfire. Godspeed.