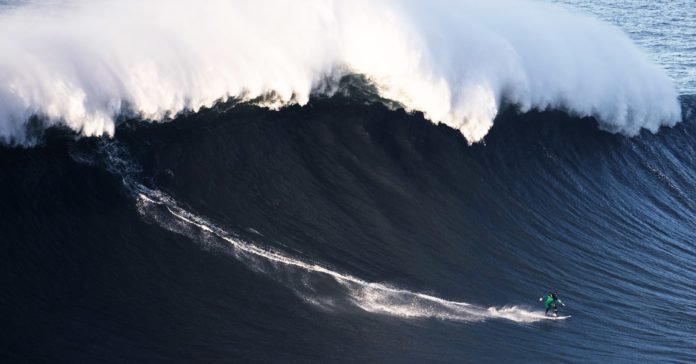 I’ve never been surfing—but I’m willing to give it a try. I would not, however, be interested in attempting to surf a massive wave like this one off the coast of Portugal. That’s a pass for me.

Of course even if you don’t surf, there is still some cool physics involved in the act of surfing (let alone all the physics of wave formation). So, how does a rider stay moving with a huge wave like this? As with all motions, the key is to look at forces.

Here’s a diagram showing the forces on a surfer moving at a constant speed on a wave.

Remember that these forces all have to add up in a way to make zero net force. If there is a non-zero net force on the surfer then there would also be an acceleration (that is the nature of forces). But what are these three forces? The most obvious is the gravitational force. This is the downward pulling force that results from the mass of the surfer and the Earth interacting. It’s a cool force, but since neither the masses nor the distances between the objects change—this force is also constant.

The next force to consider is the drag force. As the surf board moves through the water, there is some resistance. This resistance is like a frictional force in the opposite direction of motion and parallel to the surface of the water. Notice that the water for this wave is not horizontal—since it’s, you know, a wave. I assume the magnitude of this drag force would increase with an increase in surfer speed.

The last force is the one I have labeled as “water.” Yes, I am cheating here. Technically the “drag” force is also from the water, but I didn’t know what else to call this. The important point is that this component of the force from the water is perpendicular to the surface of the water instead of parallel (like the drag force). It comes from a combination of buoyancy and a type of “lift” as the board moves through the water. This water force prevents the board from “sinking” into the wave. Add up all these forces and the surfer moves at a constant speed.

But wait: It gets more complicated. In order to see the problem, I will draw a slightly more detailed force diagram—but the surfer will just be a dot.

So, a steeper wave means a greater “forward” pushing force which would speed up the surfer. But a greater speed probably means a greater drag force. This means that for a given wave angle, there is only one surfer speed that will give a particular velocity. That’s important because you probably want to be traveling at the same speed as the wave—that’s the whole point of this sport called “surfing.” Oh, I should point out that in this example the wave and the surfer are moving in different directions—the wave is moving horizontally, but the water in the wave moves in complicated ways.

Thus it seems there should be a particular spot on the wave for a surfer to “catch the wave.” If a surfer is moving too fast for a wave, there is always another option—turn. If a surfer moves perpendicular to the direction the wave moves, the speed in the direction of the wave is much lower. I guess (reminder: not an actual surfer) this is why they travel along the length of the wave. This is likely doubly true for wave that’s as giant and steep as this one in Portugal.

I still would be afraid to even be near this type of a wave.