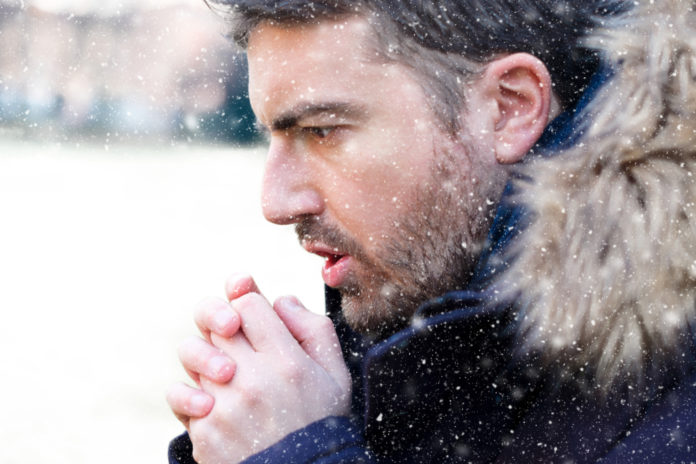 If you wanna shiver right, you gotta exercise.

That’s the suggestion of a new study in The Journal of Physiology looking at how mice fared in the cold after they’d spent some time undergoing regular jogging sessions on a wheel. Compared to couch-potato mice, the fit mice lost less weight in the cold and had higher body temperatures. The findings reveal that physical fitness likely plays a role in how well we deal with chilly situations.

When our core body temperature drops, we respond in a few different ways. Hunched shoulders and goosebumps are the first step, and if that’s not sufficient, our bodies switch to more overt methods of producing heat. Shivering is the most obvious one. Trembling limbs and clattering teeth are caused by tiny muscle contractions that burn up energy stores in our bodies. As the body breaks down the molecule ATP to fuel muscle movements, the reaction creates heat as a byproduct. Shivering is, in essence, a micro-workout that uses what would normally be excess heat to warm our bodies back up.

But we can’t work out forever – our muscles will tire eventually. If the same holds true for shivering, it could have dire consequences for people who live or work in extreme cold.

Researchers from the University of Guelph and the University of Copenhagen put mice in cages where the temperature hovered around 40 degrees Fahrenheit and watched how they responded over time. One group of mice had been voluntarily exercising on a wheel every day for 12 days; the others had not. Compared to the controls, the fit mice stayed warmer, something the researchers say can likely be attributed to the fact that their muscles lasted longer when shivering.

Fit to be Warm

Importantly, the scientists say their results were the same even when controlling for levels of brown fat burning between the two groups. In addition to shivering to say warm, our bodies also burn stores of brown fat, something that has little to do with our level of fitness. Brown fat makes up only a small percentage of our total fat stores. But unlike more common white fat, brown fat is more useful to us because it easily keeps us warm.

If the mice got tired, they could have perhaps simply begun making heat by burning off stores of brown fat, but that doesn’t seem to have been the case. The sedentary mice were colder than their fit counterparts, meaning that their brown fat stores couldn’t quite make up the difference. Being able to shiver well seems to play an important role in staying warm.

The researchers didn’t directly measure how active the mice’s muscles were during the experiment, so they say there’s still further work ahead to directly prove their theory that exercise leads to better shivering and protection from the cold.

And the experiment was in mice, so there’s no evidence of this in humans yet, either. If there’s anyone out there who might be willing to test it, however, it’s probably Wim Hof.

The Dutch daredevil has held records for sitting and swimming in icy water and has run marathons barefoot above the Arctic Circle. He attributes his abilities to regular exposure to the cold and to a special breathing regimen. Exactly how he withstands the cold — and if other people could ever truly do the same — is uncertain, though one study did find higher levels of brown fat. That jibes with studies finding more brown fat in people exposed to the cold.

A crucial part of his “method,” however, also seems to be exercise, and as this most recent research indicates, being fit is probably another big boost to our bodies’ furnaces. Perhaps he’d like to step up and volunteer?