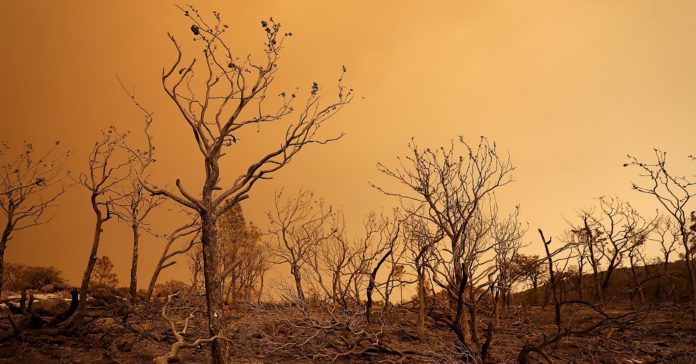 To date, California’s Ranch fire—the (much) larger of the two wildfires that make up the Mendocino Complex fire—has consumed more than 360,000 acres of Northern California, making it the largest conflagration in state history. It was probably wind that taught the nascent Ranch fire to walk and search for food, to glut itself on timber and brush and grass, to race up hills and away from its place of birth. But the crucial details of those beginnings remain unresolved.

Humans start an estimated 84 percent of wildfires, and determining where and how the worst ones originate is a crucial step in assigning blame. That’s where experts like Paul Steensland come in. A wildfire investigator for going on 50 years, he was the US Forest Service’s premier fire sleuth before he retired in 2005 to start his own consultancy. These days Steensland works on a contract basis and trains others to retrace a fire’s path of destruction to its place of origin and sift through the ashes—sometimes literally—in search of its cause.

As another wildfire investigator with 26 years’ experience told me: “Paul is the one. He is the master.” Here, according to him, are the most essential pieces of equipment to bring when analyzing an inferno like California’s Ranch fire.

Fire investigators show their work. “You need to be able to explain exactly how you narrowed your search from a 10,000 acre area down to the six-inch-by-six-inch square where you found the match,” says Steenland, who is often called on to testify about his findings. Which is why he says a camera is the single most important piece of equipment he brings into the field.

In the case of fires, the primary form of evidence are “indicators”—physical objects carrying traces of an inferno’s spread. A skilled investigator can use them to determine which way a fire was traveling and the direction from which it came, like a hunter backtracking the prints of quarry that just happens to be 1400° Fahrenheit.

An example of foliage freeze in the needles of a pine tree. Fire investigators use indicators like this to map a fire’s spread and retrace its path to its point of origin.

So-called “protection indicators” form when part of an object is shielded from the heat of advancing flames. The result is an object with more damage on one of its sides than the other. Another telltale indicator is “foliage freeze.” Like a strand of blow-dried hair, leaves and stems and pine needles can become pliant in the presence of heat and bend in the direction of prevailing winds, only to remain pointed, fingerlike, in the direction of an inferno’s travel as they cool and stiffen. A camera allows investigators like Steensland to catalogue these and other indicators as they map and retrace a fire’s spread.

Fires, in their early stages, tend to burn in a V shape. Leading the charge is what fire investigators call the advancing area. It burns hotter and the more intensely than any other portion of the fire. The apex of the V, also known as the heel, burns slowest and coolest. The flanks, which run outward from the fire’s sides at angles between 45 and 90 degrees, burn at a rate and temperature somewhere in the middle.

Wildfire investigators use color-coded surveyor flags to mark directional fire indicators: Red flags correspond to the advancing area, yellow to the flanks, and blue to the heel. Steensland developed the system in the early aughts as a training tool, but it turned out to be a great way to visualize a fire’s spread on the fly. Now they’re an essential feature of wildfire investigation kits. One by one the flags go up, and pretty soon, generally in the direction of the blue flags near the base of the V, you begin to develop an idea of where the fire began (investigators call this the ignition area), and what it looked like as it moved across the landscape.

The yucca base at the center of this photo is an example of a protection fire indicator. It’s been labeled with a red flag, to indicate its presence in an advancing fire area. The yellow evidence tents denote that the indicator was photographed and its positioned measured. The red arrow points in the direction of fire progression at that point.

This LIDAR map depicts the indicators that Steensland and his team flagged in the General Origin Area, or GOA, of the Oil Creek Fire a wildfire that burned some 60,000 acres of northeast Wyoming in 2012. The color coding reflects how the fire spread, based on the evidence they found.

Investigators scrutinizing a large fire can find on the order of 1,000 indicators. Of those, a team might only mark a couple hundred. “And out of those, we typically only document 30, 40, or 50,” Steensland says.

What indicators they document they’ll mark with evidence tents—little yellow triangles marked with bold, black numbers. The point is to select a representative sampling of the indicators that they found. Documenting all of them would be overkill, but when you’re presenting your evidence to a lay audience—a judge and jury, for example—it’s important to have a good visual examples of what you discovered in the field. “So you can say, yeah, we found and marked 50 charred rocks. We only photographed three of them, but this is what the other 47 looked like,” Steensland says.

Another purpose of documentation is reproducibility. That means photographs alone are insufficient; to ensure that anyone can visit the scene at a later date, check your work, and retrace your steps, you need to specify precisely where you found each piece of evidence.

Handheld GPS units can be off by more than 20 feet. Not good enough. Instead, Steensland recommends the right angle transect method: Run a 100-foot tape measure along a north-south or east-west axis, between two markers placed somewhere near a cluster of evidence. (Two pieces of rebar, painted orange, usually does the trick.) Then run a second tape measure from each piece of evidence back to the first measuring tape, such that the two tapes overlap at a 90 degree angle. Record the distances and bearings between the point of intersection, your rebar, and the pieces of evidence you’re documenting.

Steensland says GPS units are typically good enough to get someone to your reference points, and might soon become accurate enough to abandon the transect method. But for now, evidence at most fires is still measured and documented with tape.

A fire investigation team uses stakes and string to perform a grid search.

Wildfires are common enough that investigators sometimes evaluate several per day. When you’re working that quickly, there’s no time to be meticulous. “Most fires are small, and there’s never going to be civil collection for damages, so there’s no incentive to determine who’s responsible,” Steensland says.

Stakes and string (A), a magnifying glass (B), and steel measuring tape (C), are just some of the essential fire investigation tools featured in this kit.

But when a fire becomes big, expensive, or deadly, investigators will take time to plot out the suspected ignition area with stakes and string, dividing the ground into parallel lanes no more than a foot wide. When the fire is particularly bad—if multiple people have died, or the investigators suspect arson—they’ll run additional string perpendicular to the search lanes to form a grid, just like an archaeological site. Dividing the ignition area into small squares serves to systematize the search and guide the eye, both of which are crucial for the steps that follow.

The search of the ignition area proceeds in four stages. Stage one involves scouring the ground visually, unaided. For the second stage, investigators make another pass with the help of magnification. To keep his hands free, Steensland uses four-power reading glasses, but many investigators opt for a magnifying glass.

Patience and diligence are key. To quote the Guide to Wildland Fire Origin and Cause Determination, a 337-page field guide published by the National Wildfire Coordinating Group that Steensland helped develop, the cause of the fire is “usually very small, and black, and is located in the middle of a lot of other black material.”

After their visual search, investigators proceed to stage three: Passing over the ignition area with a magnet or metal detector. Steensland prefers to use a magnet, as many of the metal objects that start fires are ferrous. Brake-shoe particles. Splinters from a bulldozer’s cleats. Fragments of a spinning saw head. Even the staple from a book of matches. A powerful magnet can attract all of them through several inches of ash and soil (an important consideration, Steensland says, since hot metal tends to burrow).

“Sometimes you find stuff,” Steensland says. “Most of the time you don’t. But by running over the area with a magnet, you can eliminate ferrous sources of ignition.”

Trowels and cans for collecting and storing evidence.

Once they’ve scoured the ignition area by eye and by magnet, investigators will proceed to stage four: Collecting debris and sifting it. “If there’s anything in there big enough to start a fire, you’ll typically catch it,” Steensland says. “I once found a match by sifting—just the head and about a quarter inch of stem.”

Investigators will deposit sifted evidence—and any other clues collected up to this point—into a variety of containers, from paper and plastic bags to old film canisters and pill bottles. These are part of an investigator’s evidence collection kit. “Technically that kit contains more than one item, but I’m going to cheat here,” says Steensland, who carries things like nitrile gloves, tweezers, a small trowel for exhuming fragile objects, and evidence tags to label what he finds. It could be as incriminating as a match or as incidental as an empty beer can (“it might have fingerprints,” Steensland says); if it has evidentiary value, an investigator will bag it and tag it, taking care to note what the object is, who collected it, and where and when it was found.

Perhaps one of the investigators working the Ranch fire will bag a tiny match, or a shard of metal, that ignited California’s biggest blaze ever.

GizmoCrazed - May 24, 2019 0
Tornadoes are tearing up the Midwest, Airbnb calls truce, and we've got some books for your long weekend. Here's the news you need to...

August is hoping Airbnb, Homeaway hosts will use their smart locks

Cut the Cords:  Changing Over to Wireless Speakers is Easy

Volkswagen has locked down $25B in battery supplies for its electric...