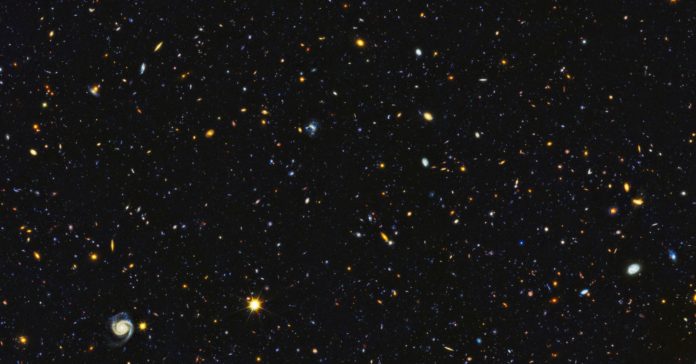 Deep space is a mysterious place. Violent events occur, but it takes millions or even billions of years for the news to reach us. Light traverses the darkness and quietude of space for billions of miles before being collected in the lenses of our telescopes, and while we may have waited millennia to view these mysteries, the photos are certainly worthwhile. The Hubble Space telescope has been looking back in time since it first became functional in 1993, and this week we are taking full advantage of Hubble’s spectacular optics by lingering in the farthest reaches of deep space. Those wide field images that Hubble has collected over the years contain valuable data about the earliest galaxies, how fast the universe is expanding, dark matter, dark energy, how galaxies become galaxies.

And this type of cosmological information is not all that scientists get from examining images of deep space—it has also helped confirm Einstein’s theory of general relativity. In 1936 Einstein first thought up the theory of gravitational lensing, an effect that would be created when massive objects bent and twisted the physical space around them, forcing whatever light was behind the object to bend and twist as well. Then in 1937 astronomer Frizt Zwicky posited that clusters of galaxies could bend light this way, and in 1979 this theory was confirmed. Get ready to see it for yourself and try not to get too bent out of shape on the ride.

What do subscription services and streaming mean for the future of...

GizmoCrazed - June 12, 2019 0
Between xCloud, Stadia and a slew of subscription services, this year's E3 marks a turning point for the industry Brian Heater @bheater / 19 hours The...

Robots to the Rescue: Saving Lives with Unmanned Vehicles

Donald Trump is the biggest political spender on Facebook