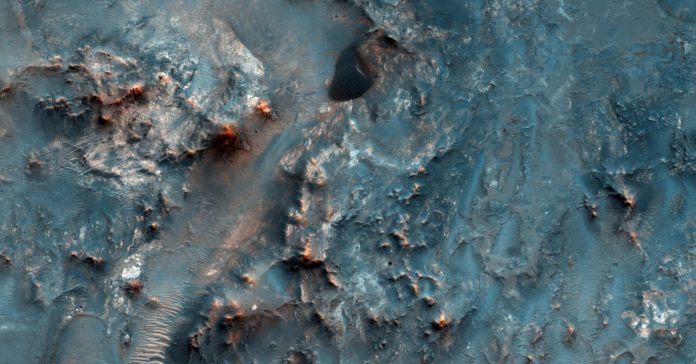 Listen, I get it. You want to go to Mars. I want to go to Mars. (Sort of.) And the plan—it’s good. A rocket with people. A base on the moon. Then more rockets and more people. Start making fuel on the surface, maybe depot it along the way. An outpost becomes a base becomes a domed city. And then: terraforming.

Bring dead Mars back to life, build it a new atmosphere with whatever’s left in its soil—frozen carbon dioxide, most likely—to up the air pressure, rely on greenhouse warming (you know, like climate change?) to make the place warm enough so frozen water, locked away underground, melts and comes roaring back. Oceans! Air! Maybe breathable, but at least enough so you don’t have to walk around in a spacesuit. Boom (where the value of “boom” = 10,000 years, plus or minus). Up the gravity well we go, and we can get moving on the Earther-Martian Colony Revolution all the hard sci-fi keeps promising.

It ain’t crazypants. The astronomer Carl Sagan, an upright symbol of scientific rectitude, pitched “planetary engineering” in 1971, melting water vapor from Mars’ polar ice to create “much more clement conditions.” Twenty years later, the astrobiologist Christopher McKay rounded the idea out, suggesting that terraforming of Mars was possible as long as the planet still had enough carbon dioxide, water, and nitrogen squirreled away to volatilize and pump into the atmosphere.

But a couple of scientists who study Mars are trying to burst that hermetically-sealed, oxygen-recirculating, radiation-shielded bubble. If a new analysis is correct, conditions on Mars make it impossible for existing technology to turn it into a garden of Earth-like delights.

“We were able to put together for the first time a reasonably clean inventory of the CO2 on Mars,” says Bruce Jakosky, a planetary scientist at the University of Colorado and co-author, with Northern Arizona University’s Christopher Edwards, of the new paper. “The bulk has been lost to space, a small amount to polar ice and shallow carbon-bearing minerals, and an unknown amount to deep carbonates.” Even adding in bits of CO2 stuck onto rocks—“adsorbed” onto their surfaces—and a little more locked into water-molecule cages called clathrates doesn’t help. “Even if you put it all back into the atmosphere, it doesn’t add up to enough to warm the planet,” Jakosky says.

Atmospheric pressure on the surface of Earth is about 1 bar; you need about that much CO2 on Mars to bring the surface temperature up to freezing; even just 250 millibars would change the climate there significantly. And some time in the past, Mars had that and more—geology and surface morphology strongly hint at the existence of liquid water on the planet’s surface in its distant past, which means it had to be warm enough and pressurized enough to retain that liquid water. If the planet had CO2 in the same proportions of Earth and Venus, Jakosky says, you’d expect the equivalent of 20 bars of the stuff somewhere—mineralized as carbonate, frozen in polar ice, something. “For the past 40 years, the mantra of Mars science has been looking for carbonate deposits that had to exist, because the CO2 had to have gone somewhere,” he says. “Down into the crust, it would be accessible, perhaps. If it went up to the top and got lost out of the atmosphere, it’s gone.”

New radar data has yielded new numbers for CO2 near the polar caps. The Mars Reconnaissance Orbiter has collected numbers for carbonate distribution. And the Mars Atmosphere and Volatile Evolution (Maven) probe, in orbit since 2014, has been quantifying the gas lost to space. (Jakosky is the principal investigator for that mission.) And the results are ugly, if you’re a would-be terraformer.

Polar caps give you about 15 mbar. Strip-mining the carbonates give you less than 15 mbar; maybe up to 150 mbar if you really squeeze. Adsorbed gas in the regolith? Just 40 mbar even if you process all the dirt on Mars to a depth of 100 meters. “It would be almost impossible to get up above 40 or 50 millibars, and that’s not enough pressure, and not enough of an effect on temperature,” Jakosky says. “You could probably push it up by a factor of two or three, but even that doesn’t get you anywhere near the amount required to produce significant warming.”

Or … well, maybe he’s wrong. Terraforming pioneer Christopher McKay still has hope. “The key question for terraforming is the amount of CO2, N2, and H2O on Mars. Unfortunately there is nothing new here to resolve this question,” McKay emails. Jakosky’s Maven results only show some of Mars’ ex-carbon dioxide leaving, not all of it. So maybe it’s still there, McKay says. “We are still highly uncertain as to the amount of CO2 below the surface. We don’t have good data and we need to drill deeply to get it.”

It’s true that Mars remains full of surprises—as last week’s announcement of a possible sea of briny liquid water under the pole shows. So these newly crunched numbers don’t dampen the spirits of the real Mars jockeys. Robert Zubrin, president of the Mars Society and author of The Case for Mars, says Jakosky’s numbers are “systematically pessimistic.” Zubrin doesn’t need a full bar. Just give him 300 mbar. That’s, like, Mount Everest pressure. “Two hundred millibars means no spacesuits. It means you can create domed enclosures where the pressure on the inside equals the pressure on the outside,” Zubrin says.

Zubrin and McKay also point out that stretching the bounds of the hypothesis just a little paints a much rosier picture for the red planet. Artificial greenhouse gases—maybe chlorofluorocarbons made from the abundant chlorine in the Martian regolith, or something even more exotic and faster-working, a “super greenhouse gas,” could get the job done. If anyone knew how to make them. And release them. And make sure they didn’t destroy what little ozone is there, so that ultraviolet radiation doesn’t join the the killer cosmic radiation bombarding the magnetosphere-less Mars.

(Doubly related: Water on Mars makes it slightly more likely that something is alive there already. “Terraforming” a world with indigenous life is the difference between the Genesis effect and the Genesis torpedo. That’s an ethical conversation that’ll have to happen along with the scientific and policy ones.)

Which raises a triply related question: Why? “We’re getting away from the science here, but I would question the rationale for terraforming to begin with,” Jakosky says. “Having a back-up planet in case we screw this one up, or it gets screwed up from external drivers, I think is a poor argument. It’s a lot easier to keep this one pleasant and with a clement climate than it is to change the Mars environment.”

Explore? Sure. Permanent scientific base? Absolutely. But cities? Oceans? Canals? Take a deep breath—because as far as anyone knows, you literally cannot do that anywhere else in the universe.