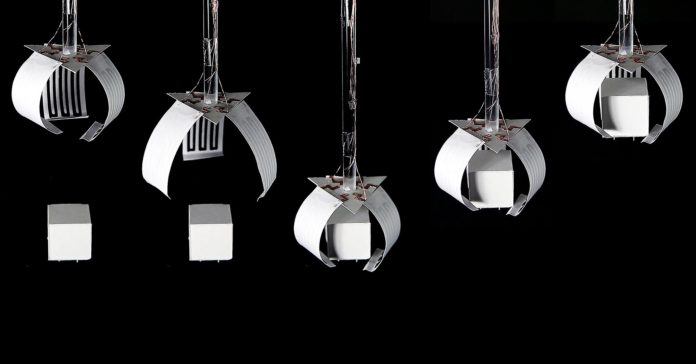 As far as plant names go, the sleepy plant—or shy plant, or shameplant, known more formally as Mimosa pudica—is hard to beat. Touch one of its leaves and it curls up like it’s embarrassed, the leaflets folding in on each other. It’s hypnotic and, well, kind of a surprising response for an organism without a brain.

Now, the shameplant is getting its very own robotic doppelganger. Researchers at Carnegie Mellon University have developed deceptively simple actuators (the fancy term for a motor that moves a robot) made of conductive 3-D printed material and paper. Apply electricity to the inked material and it shapeshifts, producing smooth movements. It’s not the burliest actuator by any means, but paper actuators could well carve out their own niche in robotics.

The trick is something called a polylactide, a kind of thermoplastic that provides shape memory. This is combined with graphene, which carries current, to make 3-D printed “ink.” After the printer lays down the ink on a piece of paper, the researchers pop it in an oven at 160 degrees Fahrenheit. When they pull it out, they bend it to the default shape they want the material to “remember” when the paper is at rest.

Take a look at the GIF below of a paper gripper. When the researchers apply electricity, it produces heat, which activates the thermoplastic and softens it. With the thermoplastic now more malleable, the natural stiffness of the paper flattens everything out. So the fingers straighten a bit when current is applied, then return to a more curved default shape when the thermoplastic cools and hardens, thereby gripping the object. Without a heat source, it goes back to the default. “It basically becomes stiffer and pulls the paper substrate up again due to its shape memory effect,” says robot designer Lining Yao, who helped develop the system.

The researchers could also modify the system to respond to human touch. A finger will change the capacitance of the circuit, which a microcontroller detects. With a touch-sensitive actuator like this, the mechaplant can fold in on itself if disturbed, just like the real thing out in nature. The team also built a lamp that turns on with touch and changes shape as its vertical paper supports morph.

The return to the default shape, though, doesn’t happen particularly quickly. Once the electrical heat source is removed, the thermoplastic has to air-cool to stiffen up and assume the set shape. So maybe down the line, instead of a 3-D printed “ink” of thermoplastic, it could be more porous. “You can imagine if it’s porous, the air can get in and out much faster,” says Yao.

Another downside, of course, is that paper isn’t the strongest of materials. It also has a pesky habit of catching on fire, which probably means paper actuators won’t have much of a role in, say, manufacturing robots.

But for kid or pet-friendly robots? Just maybe. So-called “soft” robots like this new paper system may be weaker, but they’re much better at getting along with humans. And they’re super cheap—helpful in any situation that prioritizes disposability.

A bigger issue is the very nature of heat. “It is a really simple method—joule heating leads to thermal expansion—and uses inexpensive controls and materials, but it is incredibly inefficient,” says mechanical engineer Nicholas Kellaris, who studies actuators but who wasn’t involved in this paper. The electricity you start with is high grade energy, but heat? Not so much.

“Since these paper actuators presented in the paper are not strong, I think their promise lies in art and interactive design with morphing structures,” says Kellaris. Like making mechaplants that are ashamed of themselves, for instance. If that’s not a promising future, I don’t know what is.