NASA’s ambitious mission to go closer to the Sun than ever before is set to launch in the small hours between Friday and Saturday — at 3:33 AM Eastern from Kennedy Space Center in Florida, to be precise. The Parker Solar Probe, after a handful of gravity assists and preliminary orbits, will enter a stable orbit around the enormous nuclear fireball that gives us all life and sample its radiation from less than 4 million miles away. Believe me, you don’t want to get much closer than that.

If you’re up late tonight (technically tomorrow morning), you can watch the launch live on NASA’s stream.

This is the first mission named after a living researcher, in this case Eugene Parker, who in the ’50s made a number of proposals and theories about the way that stars give off energy. He’s the guy who gave us solar wind, and his research was hugely influential in the study of the sun and other stars — but it’s only now that some of his hypotheses can be tested directly. (Parker himself visited the craft during its construction, and will be at the launch. No doubt he is immensely proud and excited about this whole situation.)

“Directly” means going as close to the sun as technology allows — which leads us to the PSP’s first major innovation: its heat shield, or thermal protection system.

There’s one good thing to be said for the heat near the sun: it’s a dry heat. Because there’s no water vapor or gases in space to heat up, find some shade and you’ll be quite comfortable. So the probe is essentially carrying the most heavy-duty parasol ever created.

It’s a sort of carbon sandwich, with superheated carbon composite on the outside and a carbon foam core. All together it’s less than a foot thick, but it reduces the temperature the probe’s instruments are subjected to from 2,500 degrees Fahrenheit to 85 — actually cooler than it is in much of the U.S. right now. 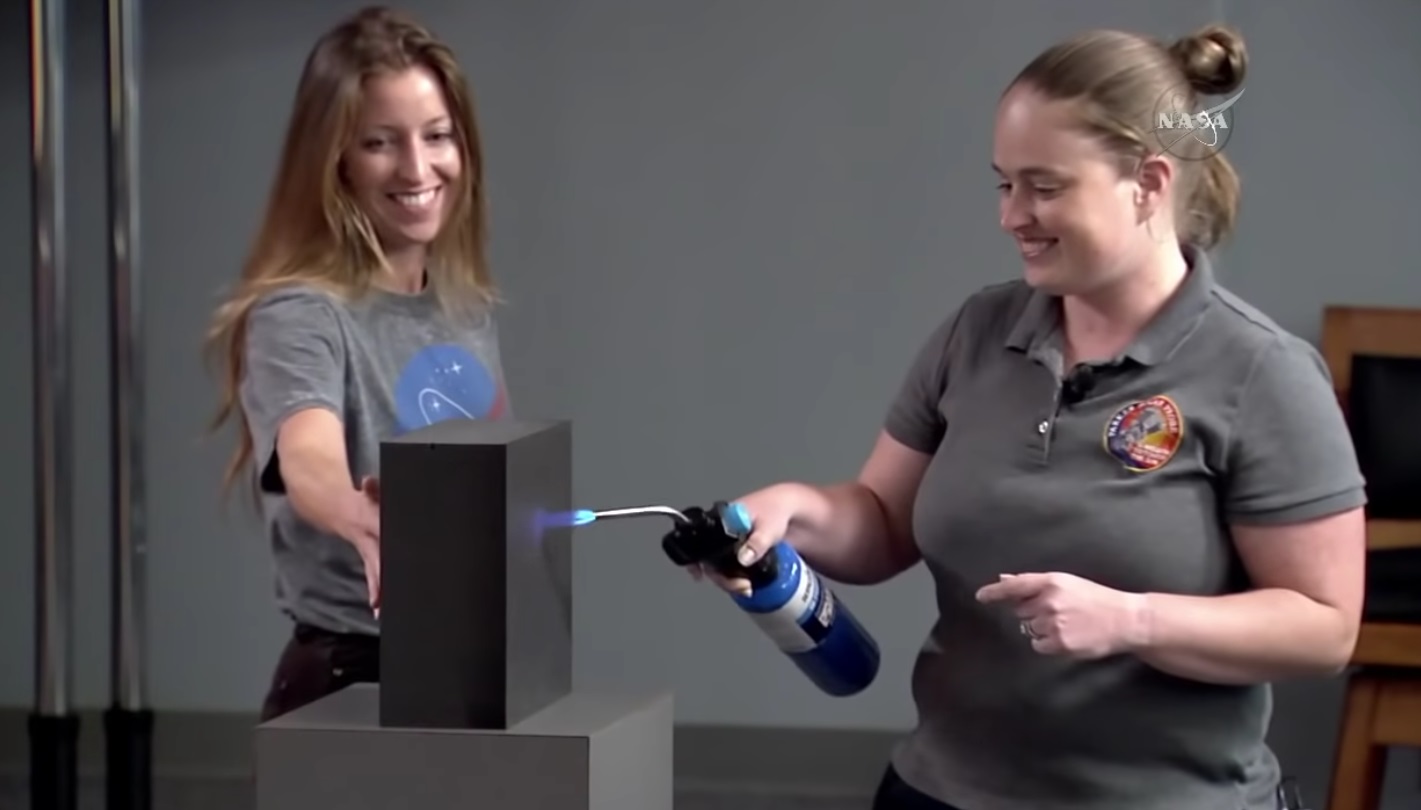 The car-sized Parker will orbit the sun and constantly rotate itself so the heat shield is facing inward and blocking the brunt of the solar radiation. The instruments mostly sit behind it in a big insulated bundle.

And such instruments! There are three major experiments or instrument sets on the probe.

WISPR (Wide-Field Imager for Parker Solar Probe) is a pair of wide-field telescopes that will watch and image the structure of the corona and solar wind. This is the kind of observation we’ve made before — but never from up close. We generally are seeing these phenomena from the neighborhood of the Earth, nearly 100 million miles away. You can imagine that cutting out 90 million miles of cosmic dust, interfering radiation and other nuisances will produce an amazingly clear picture. 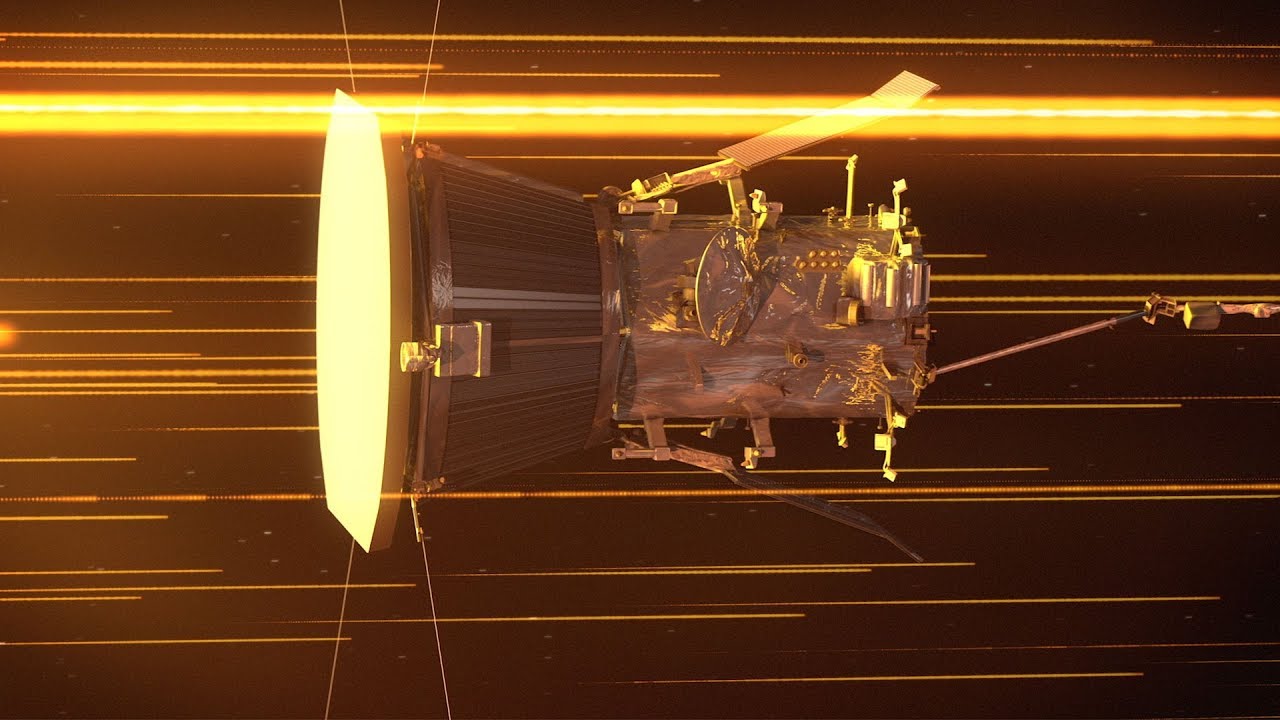 SWEAP (Solar Wind Electrons Alphas and Protons investigation) looks out to the side of the craft to watch the flows of electrons as they are affected by solar wind and other factors. And on the front is the Solar Probe Cup (I suspect this is a reference to the Ray Bradbury story, “Golden Apples of the Sun”), which is exposed to the full strength of the sun’s radiation; a tiny opening allows charged particles in, and by tracking how they pass through a series of charged windows, they can sort them by type and energy.

FIELDS is another that gets the full heat of the sun. Its antennas are the ones sticking out from the sides — they need to in order to directly sample the electric field surrounding the craft. A set of “fluxgate magnetometers,” clearly a made-up name, measure the magnetic field at an incredibly high rate: two million samples per second.

They’re all powered by solar panels, which seems obvious, but actually it’s a difficult proposition to keep the panels from overloading that close to the sun. They hide behind the shield and just peek out at an oblique angle, so only a fraction of the radiation hits them.

Even then, they’ll get so hot that the team needed to implement the first-ever active water cooling system on a spacecraft. Water is pumped through the cells and back behind the shield, where it is cooled by, well, space.

The probe’s mission profile is a complicated one. After escaping the clutches of the Earth, it will swing by Venus, not to get a gravity boost, but “almost like doing a little handbrake turn,” as one official described it. It slows it down and sends it closer to the sun — and it’ll do that seven more times, each time bringing it closer and closer to the sun’s surface, ultimately arriving in a stable orbit 3.83 million miles above the surface — that’s 95 percent of the way from the Earth to the sun.

On the way it will hit a top speed of 430,000 miles per hour, which will make it the fastest spacecraft ever launched.

Parker will make 24 total passes through the corona, and during these times communication with Earth may be interrupted or impractical. If a solar cell is overheating, do you want to wait 20 minutes for a decision from NASA on whether to pull it back? No. This close to the sun even a slight miscalculation results in the reduction of the probe to a cinder, so the team has imbued it with more than the usual autonomy.

It’s covered in sensors in addition to its instruments, and an onboard AI will be empowered to make decisions to rectify anomalies. That sounds worryingly like a HAL 9000 situation, but there are no humans on board to kill, so it’s probably okay.

The mission is scheduled to last seven years, after which time the fuel used to correct the craft’s orbit and orientation is expected to run out. At that point it will continue as long as it can before drift causes it to break apart and, one rather hopes, become part of the sun’s corona itself.

The Parker Solar Probe is scheduled for launch early Saturday morning, and we’ll update this post when it takes off successfully or, as is possible, is delayed until a later date in the launch window.

GizmoCrazed - November 26, 2011 0
The cat and mouse combats between Apple and its rivals are always a hot topic for tech geeks for pinning their opinions upon. Apple...

Skype + Facebook = Critical Security Vulnerability That Can Compromise Your...