NASA&#039;s Parker Solar Probe Is Built to Survive a Brush With the Sun 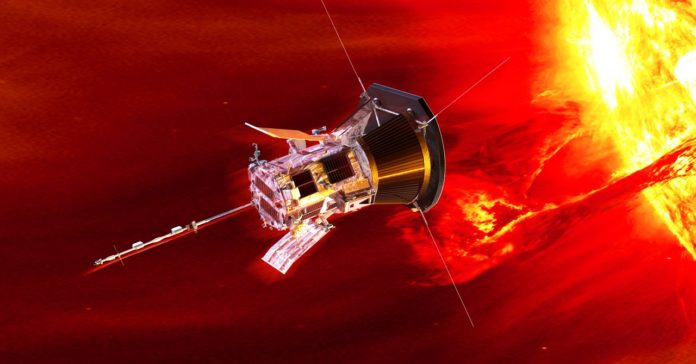 Early Saturday morning, the skies above Cape Canaveral will light up with the launch of the Parker Solar Probe. Its mission? To sweep through the sun’s infernal outer atmosphere, studying the gaseous fireball at the center of the solar system at closer range than any man-made object ever before.

Despite being the nearest star to Earth, the sun’s extreme environment has stymied scientists for decades. Some of its quirks are still a mystery, like why the its atmosphere is hundreds of times hotter than its boiling plasma surface. Or how it generates solar wind—gusts of outflowing, ionized gases—and accelerates it into the far reaches of the solar system at supersonic speeds. During its historic seven-year mission, the Parker probe will collect data that researchers hope can answer these long-standing questions. Its first pass of the sun is scheduled for November, and the information it collects could eventually be used to feed models for predicting solar flare ups and outbreaks of space weather that can scramble satellites, endanger astronauts aboard the International Space Station, and knock out power grids back on Earth.

Getting those measurements won’t be easy. Parker will have to swing within 4 million miles of the sun’s surface, sailing through temperatures spiking to over a million degrees Fahrenheit while simultaneously being bombarded with the yellow star’s eyeball-boiling brilliance. Here’s what’s keeping the little probe from melting down.

The key piece of engineering enabling Parker’s two dozen planned flybys is a disc-shaped thermal protection shield. Eight feet wide and just four and a half-inches thick, the shield will stand between the sun’s sizzling heat and the body of the spacecraft at all times. It’s composed of two rigid plates of carbon fiber layered on either side of a super-lightweight insulating carbon foam—imagine that green foam that florists use to arrange flowers, just black, because it’s pure carbon. If you take a blowtorch to one side of it, the other will stay cool enough to touch.

Designed by engineers at the Johns Hopkins Applied Physics Laboratory and built at Carbon-Carbon Advanced Technologies, the shield is finished with a coating of white ceramic paint, on the side that will face the sun. On average, temperatures in the corona hover around 1.8 million degrees Fahrenheit, but because its density is so low—there are so few of those fast-moving, high temp particles—it won’t transfer all that heat to any objects moving through them. Direct illumination poses a bigger threat, heating the sun-facing surface of Parker’s heat shield up to 2,500 degrees Fahrenheit.

“The reflection from the coating alone knocks down the solar illumination by a factor of two,” says Jim Kinnison, Parker’s mission system engineer at Johns Hopkins APL. The remainder gets radiated out the sides of the spacecraft. So while it might be 2,500 degrees on the sun-side of the shield, the backside is a cool 570 degrees—nearly a 2,000-degree difference in the span of 4.5 inches.

In the shadow of the shield, the interior of the spacecraft will be a balmy 85 degrees Fahrenheit. “We did that on purpose so that we can fly scientific instruments we’ve flown before, so we didn’t have to redesign them for a hotter environment,” says Kinnison.

Those instruments include the ISʘIS suite—that ʘ is the symbol of the sun, added to differentiate it from the terrorist organization—which measures energetic particles to understand where they come from and how they accelerate away from the sun. There’s also WISPR, which will capture images of coronal mass ejections and other explosive events at the sun’s surface. That will allow scientists to link the probe’s physical measurements with what’s happening in the structure of the sun’s atmosphere.

But not all of those measurements can be made from behind the shield.

Exposure to the Elements

Capturing the corona’s dynamic electric and magnetic fields requires five long antennas, four of which will be exposed to the sun. Known as the FIELDS suite, this instrument had to be fashioned from thin walled tubes of niobium—a rare metal NASA uses in its rocket engines.

Another suite of instruments, known by its acronym SWEAP (that’s Solar Wind Electrons Alphas and Protons), will measure the velocity, density, and temperature of the most abundant particles in the solar wind. To do that, it first has to catch those particles with a special sensor called a Faraday cup. “As a concept it’s pretty simple,” says Kinnison; these cups are frequently flown in space missions. “The difference here is a huge thermal environment.”

To make that one that can withstand the heat, engineers used sheets of titanium-zirconium-molybdenum, which has a melting point of about 4,260 degrees Fahrenheit. The instrument has a series of connected electric grids with metal plates that collect any current coming through the cup. The grids are made from tungsten, which can withstand temps over 6,000 degrees Fahrenheit—so instead of the lasers that engineers normally use to etch the gridlines, Parker’s had to be made with acid.

They also had to engineer a high-temperature cable to get data from the solar cup to the ship’s computer. To solve this challenge, Kinnison’s team made the wires from niobium and ran them through sapphire crystal tubes. The cable runs from the cup to a heat box behind the heat shield and from there into the spacecraft’s computers. “The idea is to separate out the stuff that’s vulnerable from the stuff that’s not,” says Kinnison.

And that was just the beginning. Figuring out how each of these materials would behave in the sun’s corona was a challenge, too. To test them, the SWEAP team at the Smithsonian Astrophysical Observatory placed the cup in a vacuum chamber, and then focused onto it beams from four IMAX movie projectors purchased off eBay. That allowed them to test the cup’s ability to measure accelerated particles under the kind of heat and illumination it will see near the sun’s surface. MacGyver would have been proud.

But perhaps the biggest danger wee Parker will face is having to do all that science without the constant support of humans back at home. At many points during its mission the probe will be behind the sun, relative to Earth, and beyond the reach of satellite connection. At other times the heat shield itself will put the spacecraft in a communication blackout. So its engineers built a system to detect all the things that could go wrong and ways to help the probe recover.

For example, small sensors have been attached along the edge of the heat shield’s shadow. They’re placed strategically so they are the first thing to see sunlight. If they do, they alert the probe’s computer, which will automatically correct its flight course to get the shield back in a safe spot. “Parker is one of the most autonomous spacecraft ever built,” says Kinnison. “Because the worst thing would be to lose the opportunity to collect data during an encounter.”

Parker will undergo its first—and farthest from the sun—pass in November, after getting a gravity assist from Venus. Which means scientists will begin seeing snippets of low resolution data before the end of the year. “Just enough to whet our appetites,” says Adam Szabo, the Parker mission scientist at NASA’s Goddard Space Flight Center. Only after a few more passes will they have enough information to start to say whose theory of supersonically accelerating solar wind physics is correct. Equally possible is that nobody is; that it’s a mechanism no one’s thought of yet. “This is one of the last unexplored nooks and crannies of the solar system,” says Szabo. “It’s truly terra incognita.”