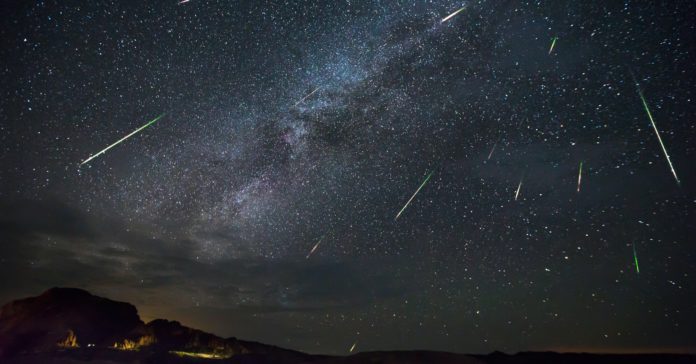 This weekend, the Perseid meteor shower will light up the moonless sky, the product of dust breaking off from the same Swift-Tuttle comet that sends its greetings to Earth every August. The richest display of meteors will appear between August 11 and 13. But as you settle down to watch those fragments burn up into nothingness as they hit the Earth’s atmosphere, something else will also be watching: NASA’s all-sky meteor camera network.

Every night, 17 video cameras scattered across the United States scan the skies for meteors. Each one sits in a sturdy white cylindrical tube for protection, sealed off by a clear dome lens that gives a clear view in all directions. “Every fireball lives only once,” says Bill Cook, the head of NASA’s Meteoroid Environment Office in Huntsville, Alabama. But this network of cameras makes them immortal.

As the Perseids reach their peak, a computer will scan the meteor cameras—which can see as far as 100 miles away—to detect motion. Stars and planets don’t move, so they disappear into the background. An airplane moves, but it has flashing lights. Bugs move, but not in a straight line. Satellites move, but slowly. Eventually, the computer disqualifies everything except for meteors.

Over the 10-year span of the program, the all-sky network has counted over 30,000 separate meteors. Two years ago, the tally got a boost when gravity from Jupiter concentrated the Perseid comet dust closer to Earth’s orbit than usual: The cameras tracked about two fireballs a minute. This weekend, we’ll only see about one per minute, which is pretty average for the Perseids. But because the shower is going to coincide with a new moon and an exceptionally dark sky, the cameras will be able to pick up meteors that otherwise would have been too faint to see.

Beyond the view of the cameras are many more meteors, too dim to be picked up. But the number of meteors the cameras do capture provides a clue: an uptick in the number of visible meteors is usually correlated with a rise in unseen ones, too. Cooke and others at his office relay this information to spacecraft operators, who use that information, however imprecise, to decide whether they want to steer away from areas with more space debris.

The US meteor camera system is just a part of a bigger picture; other countries have their own networks. They try to share their data, though it’s not always easy given that each network collects and processes the data according to their own methods. But they try. Every three years, scientists from the different systems meet at a conference to share advice, talk about new ideas, and write papers on their progress. In 2016, the conference was held in the Netherlands; next year, they’ll be headed to Slovakia.

For its network, NASA’s Meteoroid Environment Office actively sought out universities, science centers, and planetariums across the country to host the cameras. They had to be places with a strong internet connection that were nevertheless tucked away from the city glow that causes light pollution. Once, shortly after a local paper ran a story about one of the meteor cameras, someone used it for rifle target practice—so Cooke no longer likes to reveal the exact locations.

He did make an exception for a more protected camera hosted at the Pisgah Astronomical Research Institute, a research and educational outreach non-profit in the Appalachian mountains of western North Carolina. The camera is placed, like a star atop a Christmas tree, on the rooftop of the highest building on the highest hill at the campus. It’s above the maples, oaks, and poplars, for a view from horizon to horizon. NASA’s Meteoroid Environment Office came and installed the camera, and Lamar Owen, chief information officer at PARI, takes care of it and cleans the lens periodically.

Often when school groups come to visit PARI, Owen and other PARI educators will pull up NASA’s meteor website and show them images of the meteor streaks caught by the camera network. The students can also look up what part of the solar system the meteor came from, its trajectory, and its estimated size, calculations courtesy of geometry and celestial mechanics. “They think it’s the coolest thing ever,” says Owen.

But for this weekend’s Perseid showers, PARI advises that you ditch the cameras and look up at the night sky yourself. In fact, PARI is going to host a camping trip above the treeline. Unless it rains—and the local forecast has been almost uniformly cloudy recently—people will be able to pull their sleeping bags out of their tents and lie in the warm North Carolina night to watch the meteor shower. Stay up late enough, and you can join them: Just count light streaks rather than sheep.

GizmoCrazed - May 14, 2020 0
What would we do without car tracking technology? It would be challenging to manage a fleet, run a taxi company, or even secure your...

The World’s Official Kilogram Appears To Be Slimming Down