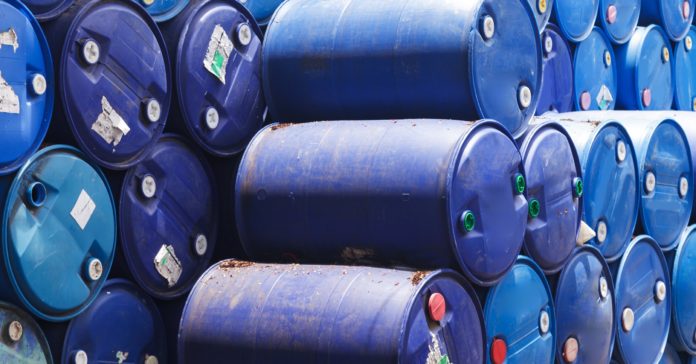 This is sort of awesome. It’s a concrete gravity battery. What? Yup. The idea is to even out the balance between power generation and power usage; like with any battery, this one allows you to store extra energy for use at a later time when demand is higher. Or maybe you could use solar power during the day to store energy in the battery to be used at night—you know, when the sun doesn’t shine.

So, how does this work? There are really two physics parts to this concrete battery: gravitational potential energy and electric motors.

If you pick up a textbook from the floor and put it on a table, it will require about 10 Joules of energy—a unit where 1 J = 1 kg*m22/s2. We can calculate the change in energy by lifting things using the work-energy principle. This says that work done on a system is equal to the change in energy of that system, and also that work depends on the force pushing on that system and the distance the force moves. Here I am using “system” to mean some thing or collection of things.

In the expression for work, the Δr is the distance the force moves and θ is the angle between the force and the direction it is moving.

So lifting a book up a distance h would have an angle between the force and displacement of 0° (remember that cosine of 0° = 0). The work done lifting an object of mass (m) and height (h) would then be:

OK. You lift some mass and you can store energy. That’s great, but how do you get the energy back into something useful? The answer is to use the same thing that lifted the mass—an electric motor. Yes. You can get energy out of a raised mass and an electric motor.

An electric motor isn’t that complicated. It’s really just a coil of wire and a magnet. As you run electric current through the wire, the current creates a magnetic field. This current-induced magnetic field interacts with the magnetic field produced by the other magnets, resulting in a rotating motor. If you want, you can probably build a simple electric motor with stuff you have around the house. Here are the instructions.

Let me show you an electric motor connected to a battery.

This electric motor lifts the mass to store the energy—but it also produces electricity. Suppose you take your electric motor and disconnect it from the battery that was running it. Now you rotate the coil of wire inside the motor. It just so happens that a loop of wire moving through a magnetic field creates an electric current. Yes, it’s true.

If you take that exact same electric motor and turn it with something, it will generate electricity. You can see this with that same demonstration motor above as I turn it and power a small light.

An electric generator and an electric motor are the same thing. It just depends on how you use it. So, for this concrete gravity battery the electrical energy goes into a motor to lift a mass a certain height. When you want to get the energy out of the battery, you use the same motor to lower the mass back down to the ground causing the generator shaft to spin and create electricity. There’s your gravity battery.

Now for an estimation. How much energy can you store in a stack of cement blocks? I will need to make some approximations first.

Let’s start simple. I have a cement drum on the ground and I put another one on top of it. I don’t get any stored gravitational energy for that first cement thingy since it can’t go any lower than it already is—but the one on top of that has a stored energy that depends on the gravitational field, the mass and the height. For the height, I am going to use the length of a cement drum (0.889 meters). The height of the center of mass for this drum is important but if I put it back on the ground the center of mass only moves 0.889 meters.

This means that one drum stacked on another one has a potential energy of 5708 Joules. That might seem like a bunch of energy, but your smart phone battery can store about 20,000 Joules (crazy but true). But wait! If I stack another drum? This second drum will have a stored energy that is twice that of the first one since it will be twice as high. Higher cement things have more energy.

I’m going to just continue stacking stuff higher and higher until I get up to 15 meters. At that point, I will start back at the ground and stack again. Just for fun, here is a plot of stored energy as a function of the number of stacked drums.

Oh, you might want the code I wrote to create this graph. Boom. But that gives 2 million Joules of stored energy with just 50 cement drums (assuming energy transfer are 100 percent efficient—which they aren’t). That’s not too bad. Of course the Tesla Powerwall can store about 50 million Joules, so 50 drums might not be enough.

Still, this battery as some nice features. It’s mechanically simple to build. If you stack some cement drums, they are going to stay like that for a long time so you don’t have to worry about battery drainage. Also, in the end all you need is a crane, a motor, and some cement.

GizmoCrazed - July 7, 2012 0
While choosing a mobile phone upgrade is certainly one of the more enjoyable decisions to have to make, for most people, it is still...

A Compound that Makes Bees Into Queens Could also Aid Human...

Documentary series Foundation is back with a season 2