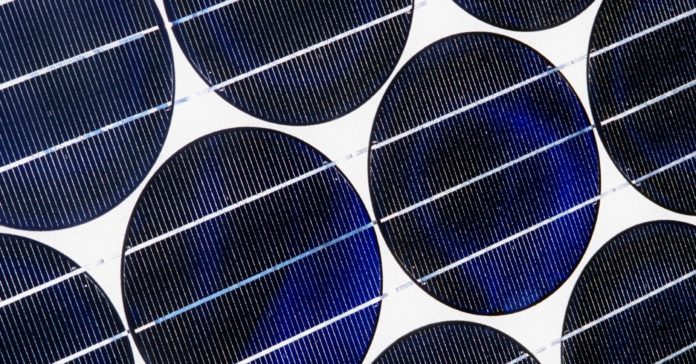 It’s a brilliant idea. Put solar panels on a drone and it doesn’t even need a battery. That’s exactly what students made at the National University of Singapore. Without a battery, you could fly a drone like this as long as the sun keeps shining. It’s awesome (assuming your motives are pure).

But if you watch the video, you’ll notice immediately that the drone is as thin as a sheet. The real question, then, is what size and mass could this drone be and still run completely on solar power? I’m going to answer this and give you a solar-powered quadcopter calculator. But first, let’s look at the important physics ideas that go into this calculation.

Power is defined as the time rate of energy usage (change in energy divided by change in time) and is measured in units of Watts.

Ideally, you want all the power from the solar panels to go into the power required to fly. This means there is no need for a battery to temporarily store energy—which is fine, since that would add mass to the vehicle. But how much power can you get from a solar panel? That is the real question.

The power output from a solar panel depends on the following values (with some initial estimates from me):

With that, I get the power output as the following equation.

That’s it for the solar power.

The power needed for a hovering quadcopter is a little bit more complicated. Let me give you the short version. Really, this works for any flying vehicle that hovers by pushing air down.

Let’s start with the nature of forces and motion. If you take an object that is at rest and increase its speed, this requires a force. The magnitude of this pushing force depends on the mass of the object, the change in speed and the time over which the speed changes. Now replace this object with air—because that’s what these flying vehicles use to fly. You can get a greater thrust force by using more mass of air using a larger rotor area. You can also get more thrust by increasing the speed of the air.

There is some more math involved here, but I am going to skip it (but you could indeed look over this if you want). But wait! We don’t care about the thrust force, we want the power. If you increase the speed of air (with mass), this increases its kinetic energy. The faster you increase the kinetic energy, the more power it takes.

This means that you could have a hovering craft with small rotors that pushes the air down really fast OR a large rotor that pushes the air down at a slower speed. But the power isn’t the same for these two options. Since the kinetic energy is proportional to the square of the velocity, the smaller rotor with faster air requires MUCH more power to hover. Incidentally, this is why a human-powered helicopter (a real thing) has to be so large to get the power down to human levels.

Now for all the details. How big is this quadcopter? How large are the rotors? What about the size of the solar panels? What if someone invents a more efficient solar panel? Instead of calculating all possible variations, I am just going to make a calculator of a sort. Really, this is just a python program that calculates the the rotor size needed to hover for a given set of parameters. Also note that this is just one more reason that python is a better calculator than your standard scientific calculator (plus python is free).

Here is the code—right here in this page. Feel free to edit the values and rerun the calculation. Don’t worry, you can’t break anything. It’s unbreakable code. Just click the “play” to run and the “pencil” to edit.

With my default estimations, I get a rotor diameter of almost 5.9 centimeters. That seems fairly reasonable? But what if you increase the mass? What about the size of the solar panels? Yes, now you can change these things with just a few edits of the code. You are all set to make your own solar-powered drone.