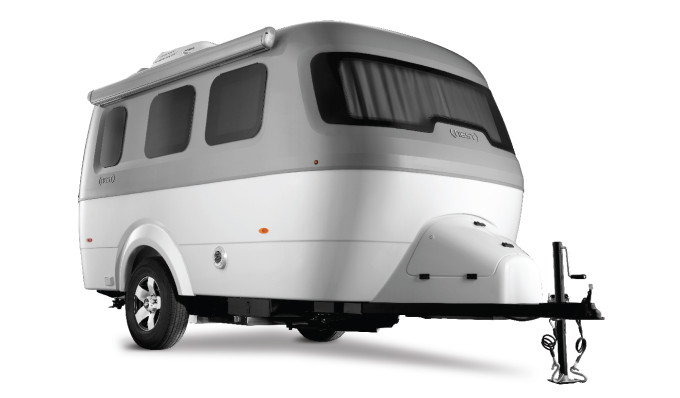 Airstream has made travel trailers for generations, and the company is ramping up plans to bring connected technology to the product line. Airstream recently announced several new products that will bring new features expected by today’s consumers, including less expensive and more capable trailers.

The iconic silver bullet trailers are a mainstay on America’s highways and byways. Trailers made today have the same classic lines as those made for past generations. For the most part, that’s not going to change. While Airstream has two new trailers that slightly depart from the shiny aluminum exterior, they’re still Airstream trailers. And for the classic models, which can command prices over $150,000, Airstream is now equipping them with smart control technology that will let owners control various functions through a smartphone app.

Featured initially on the 2019 Classic models, Airstream’s Smart Technology puts a bevy of controls in a smartphone app. It lets owners control the majority of the trailer’s systems and monitor different levels from an app. Check the propane, water and battery levels from the app or control the awning from afar. The app even lets owners locate the trailer through GPS, in case, you know, you lose your $100,000 trailer among an RV lot of other $100,000 trailers.

“Airstream owners have long been bringing digital technology and the Internet of Things (IoT) into their trailers, often in very creative ways,” said Airstream vice president of Product Development and Engineering McKay Featherstone, in a released statement. “So, it’s no surprise they embrace the idea of a smart trailer, a recreational vehicle that allows them to adventure with all the digital comforts and connectivity of home.”

Airstream also has two new travel trailers that bring the Airstream product line to lower price points. But without the silver bullet design.

An updated and more capable version of the smallest Airstream was just announced. Called the Basecamp X (pictured above), it’s designed to go places most Airstream trailers would scoff at. It’s more rugged and, frankly, cheaper than most Airstream models.

“Airstream is targeting outdoor enthusiasts with the Basecamp X,” Justin Humphrey, Airstream COO told TechCrunch. “They aren’t always younger, but they certainly index much higher in terms of outdoor activities they participate in a given year versus our more traditional buyers.”

He explained that Airstream built this model, not for a target age group but rather the outdoor enthusiast of any age. The Basecamp X’s features back up that claim, too.

The Basecamp X is a smaller trailer, with room for two to sleep comfortably. It has a 3-inch lift kit for added ground clearance and Goodyear Wrangler tires along with side skirts and wheel flares to help prevent damage. A large back door makes it easy to store kayaks or bikes inside the trailer. The smaller size allows mid-size SUVs or large crossovers to tow the trailer without much effort. The Basecamp X comes pre-wired for solar power, and there are a handful of USB charging ports and lockable gadget compartments. Prices start at $36,000, so while this might be the smallest Airstream, it still commands an Airstream price.

Announced earlier this year, Nest by Airstream is the most substantial departure from the classic Airstream. It’s built from fiberglass, and for a good reason. Airstream did not start the development of the Nest. The company bought Nest Caravan in 2016, apparently in a bid to bring to the market a new, lower-cost product line from Airstream.

Airstream says the Nest has a lot of the same characteristics found in the Classic trailers, but at a lower cost. It sleeps up to two people and has a floor plan similar to Airstream’s base Sport model. But it’s lighter and is loaded with more modern conveniences.

It’s clear Airstream is attempting to reinvent itself while staying true to what made the company an icon. It’s a fine line many companies often walk. Stay in the past too long, and upstarts surpass the incumbent. Change too quickly and alienate current buyers. As long as Airstream keeps the innovations inside the silver bullet, the company should be just fine.