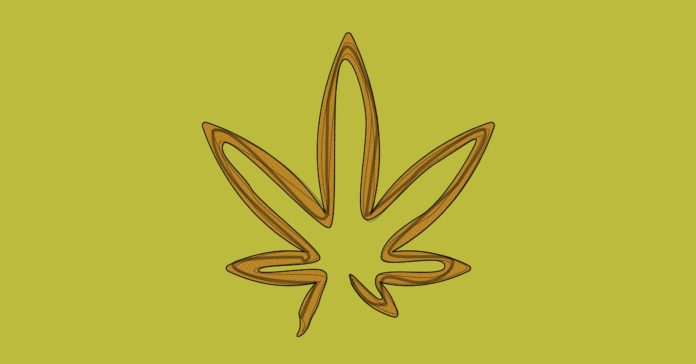 The next time you’ve got something to complain about, consider the plight of the intestinal worm. It not only has to figure out how to eat and breed in the confines of another creature, it has to prevent that creature’s body from dissolving the parasite into a mist of cells. That means dodging the immune system and inflammation, the body’s natural responses to invasion. Meaning, your late car payment ain’t got nothing on spending your entire life in an intestine.

Researchers at the University of California, Riverside have found that one nematode worm, Nippostrongylus brasiliensis, appears to boost its odds of survival by dosing its rodent hosts with endocannabinoids, molecules that are known to reduce inflammation. (The cannabis plant, of course, produces cannabinoids as well.) All the while, the host is releasing its own endocannabinoids, seemingly to dull the pain of the worm’s infiltration, creating a double dose of painkillers in the mouse’s body.

It’s a hell of a finding for parasitology, and even more promising for the treatment of parasitic worms in humans. Because it turns out that the same genes regulate endocannabinoids in our invaders as in the worms that infect rodents—meaning they could be dosing us as well.

The endocannabinoid system is highly “conserved,” meaning it evolved long, long ago before the ancestors of these worms and mice went their separate ways on the tree of the life. Science is just beginning to explore the system, but it appears to have many functions: It regulates appetite, mood, and memory and serves as the landing strip of sorts for molecules from the cannabis plant.

Now, a mouse loaded with Nippostrongylus brasiliensis is an unfortunate mouse indeed. The parasite gets in by burrowing through the skin, then riding in the bloodstream to the heart. From there it’s pumped to the lungs (the first stop for blood, since the body needs to oxygenate it), where the worm grows and burrows into tissue, leading to inflammation and damage. The mouse will then cough up the worm and swallow it. The parasite travels to the intestines, where it gnaws on tissue, breeds and releases its eggs to be pooped out and hatch into baby worms and infect still more mice.

This is all, of course, not great for the mouse’s body. But the mouse is far from defenseless. “Endocannabinoids affect the immune system, they downregulate inflammation, they improve feeding, and they can reduce pain,” says UC Riverside immunologist Meera Nair. “That’s why cannabis is used to treat cancer.” By adding its own endocannabinoids to the mix, the worm may be further relieving pain and inflammation. Both parties are doing what’s best for their survival, and just so happen to be using the same weapon. “I call it a local high,” says Nair.

By using drugs to block the endocannabinoid pathways in mice, the researchers were able to hobble the rodents’ defenses. Conversely, mice with functioning endocannabinoid systems were healthier. “We saw that the mice with higher endocannabinoids, we could predict that they would be better off in terms of having lower worm burdens and lower weight loss,” says Nair. Endocannabinoids, after all, are also useful in that they promote feeding. Meaning, the rodents are both hampering the success of the worms and keeping themselves from wasting away as the worms feed. At the moment, though, the researchers can’t say if the worm’s own endocannabinoids are having an effect on feeding, or if that’s just a function of the mouse’s own response to infection.

Another unanswered question is what the endocannabinoids might be doing to the worm’s behavior. Scientists have shown that the same cannabinoids at play between Nippostrongylus brasiliensis and the mouse severely affect the behavior of C. elegans, a non-parasitic worm. Oddly, though, “when we treat them with cannabinoids, they stop feeding,” says biologist Rick Komuniecki of the University of Toledo. “It’s not really paralysis, it’s what we call locomotory confusion. They exhibit this really Dazed and Confused phenotype. It’s Matthew McConaughey revisited.” (Ideally, for this research Komuniecki could use his “worm bong,” a custom-made hookah that would hit the worms with cooled cannabis smoke, but the drug is still illegal in Ohio. So he applies purified cannabinoids directly instead.)

How this kind of behavioral modification might work between Nippostrongylus brasiliensis and the mouse, however, isn’t as clear. Again, C. elegans is non-parasitic, so it’s got a much different lifestyle. But the work on C. elegans shows that cannabinoids can have significant behavioral impacts on worms.

The same kind of chemical warfare between worm and host may be playing out in our bellies as well. It turns out that the parasitic hookworms and roundworms that infect us share the genes that regulate endocannabinoids in Nippostrongylus brasiliensis. So there’s a solid chance that worms that land in our gut are also dosing us with endocannabinoids, a finding that could be big for medicine. “If we figure out what it’s doing in the worm, we can try to see whether we could target those pathways in the worms, and it could make a new generation of therapeutics to treat worm infections,” says Nair.

Researchers are already studying something called helminthic therapy—using parasitic worms to potentially treat disorders like celiac disease—though the mechanism of action remains mysterious. But maybe the endocannabinoid system is playing a part? “This might be the missing link of how worms can reduce inflammation,” says Nair. “It’s not the only pathway, but it might be one mechanism, and we could actually target that for therapeutics against inflammatory diseases.”

Cannabis itself may also be a useful therapy. The Aka people of the Congo Basin, for instance, seem to use cannabis to self-medicate against worms. “The people who smoked more pot had fewer worm burdens,” says Nair. The cannabis, then, may be boosting the protective immune response against the worms.

Oddly enough, University of New Mexico biologist Ben Hanelt also found this correlation among people living in the Lake Victoria Basin, but never published his findings. He was collecting stool samples in search of the eggs of parasitic worms. “There were some individuals that, when we got eggs from them, they absolutely never hatched,” Hanelt says. He observed that the people with worm eggs that never hatched had one thing in common: they all smoked pot.

So it may well be that cannabis could supercharge the body’s own defenses against parasitic worms. “If you’re ever pulled over,” Hanelt says, “you can just tell the cops: ‘I’m self-medicating!’” I’m sure that would stand up in court.”

How Roboticists Are Copying Nature to Make Fantastical Machines

GizmoCrazed - June 28, 2018 0
If nature knows what it’s doing, it sure does a good job hiding it. Like, why would evolution produce an elephant with a shovel...

Pictures Of Lunar Eclipse From Around The World — December 2011

AT&T and Verizon investigated for possibly colluding to make your smartphone...