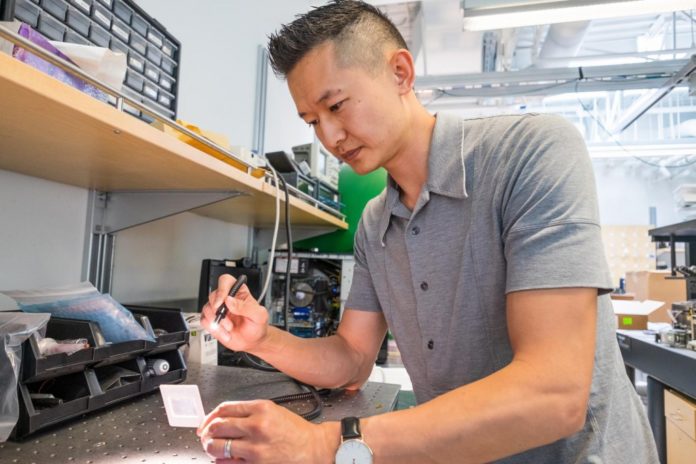 Kenneth Chau, an engineer at the University of British Columbia, helped shine a light on how electrons impart momentum. (Credit: UBC Okanagan)

Quantum mechanics, the science of the smallest stuff, is famously kooky. Light is both a particle and a wave, electrons zip around and travel instantaneously, cats are both alive and dead — it’s hard for our human brains to comprehend. One phenomenon that sort of makes a little sense, if you think about it right, is that light alone can push things around.

Formally known as ‘imparting momentum,’ the idea can also seem quantumly crazy. I go out in the sunlight all the time without feeling any pushing!

But here’s how I’ve heard it explained: Momentum is defined as mass times velocity, so even though photons (particles of light) have zero rest mass, their velocity is enormous (literally the speed of light) and they’re never really at rest, so they have a tiny effective mass.

That means they have a positive momentum, which can give a little kick to anything light crashes into. Plus, if you conceptualize light as a bunch of particles, it’s not crazy to imagine those things moving around matter as they bump into it.

Clearly, it’s still weird to think about, and physicists had never actually observed exactly how the process of light imparting momentum occurs. Until now.

Since the effect of light’s momentum is so small — there’s a reason I can’t feel sunlight pushing on me, after all — sensitive enough equipment to capture it is only just becoming available. A Nature Communications paper out yesterday describes the ingenious experiment an international team of researchers came up with.

The real trick is making sure any effects were really caused by imparted momentum from light, rather than just the side effects from heating the material as it absorbs light. To do that, the team constructed a mirror designed to absorb as little of the light as possible. Then they shot lasers at it.

The mirror, upon feeling the shove from the laser’s photons, should theoretically start to ripple as waves propagate outward from the light like a pond that had rocks thrown in it. The researchers had installed acoustic sensors designed to pick up on those ripples (since sound waves are basically just ripples in the air). These are tiny, tiny measurements, on the order of picometers, but the team picked them up.

The best part is, when they compared the experimental results with predictions from computer models, the two lined up almost perfectly. It proved not just that the experimental setup worked and they really were measuring imparted momentum (not heating effects), but also that the current understanding of light momentum, which led to the models, is indeed correct.

Great, so we understand light, and the quantum realm, just that much better now. But, unlike many particle developments, the finding may lead to various known applications.

First off, this type of setup can help scientists better characterize different materials, since different stuff will have ripples that move in different ways. Study their waves, and you’ll have an insight into their material makeup. And it makes sense to imagine it’ll help make better solar sails, which had already shown that light can impart momentum, but not exactly how.

But even more futuristically, the paper’s authors also suggest their work can “further advance optical tweezer technology.” Get a good enough handle on how light waves interact with matter, and you have an incredibly powerful and delicate means to manipulate individual particles.

Quantum mechanics may be kooky, but it gets results.