On August 1, 2, and 3, MIT Media Lab and several other sponsors hosted the first iteration of the annual Connected Learning Summit. I attended this conference to supporter my SciStarter colleague, Lea Shell,who absolutely ROCKED her “ignite” talk at the close of the conference.  But as I attended each successive day of the conference, I also fell in love with principles of connected learning and became deeply impressed with the thoughtfulness of conference organizers, presenters, and attendees. I think that connected learning, with its innovative, playful approach, has potential applications in the field of citizen science.

The author, having fun

This raises the question: what is connected learning? One of the conference organizers, Eric Klopfer, Professor and Director of the Scheller Teacher Education Program and the Education Arcade at MIT, defined it as interest-driven methods of learning that are enabled by technology and connect individuals, ideas, skills, and new methods. In practice, this definition means that connected learning is about education through innovation.

The summit will alternate each year between Boston, Massachusetts, site of the MIT Media Lab, and Irvine, California, homebase to the University of California Humanities Research Institute, another sponsor of the summit. As a merger of three other community events (the Digitial Media and Learning Conference, the Games+Learning+Society Conference, and the Sandbox Summit), the stated mission of the summit is to “fuel a growing movement of innovators harnessing emerging technology to expand access to participatory, playful, and creative learning.”

Suffice to say, the summit is a big tent, but this is to its benefit. This allows attendees to network across fields, to propose unprecedented collaborations, and to think big. Based on who I met there, educators and librarians were learning aside designers, industry professionals, and academics.

By the nature of the conference, it was impossible to experience EVERYTHING: there was a wealth of engaging panels, spotlights, and workshops to pick from during the day. However, there were times when the whole conference came together for talks that kicked off each day and for closing, performative “ignite” sessions, with less than five minutes per speaker. Nonetheless, despite all the different paths, the conference felt like one community, something conference organizer Constance Steinkuehler, professor of education and game-based learning at the University of California–Irvine, emphasized on a panel. She said the conference was about building relationships. SciStarter certainly took that advice to heart: the second day of the summit, we hosted a happy hour to connect new friends with citizen science! 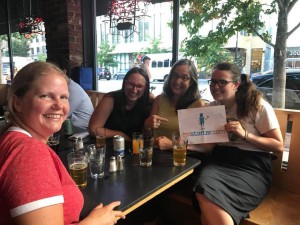 The conference opened with a dialogue between Joi Ito, director of the MIT Lab, and Baratunde Thurston, an author, comedian, and futurist. Some of their conversation was about their respective professional journeys, but much of it centered on the place of comedy in the learning process. Ito commented that “comedy is a user interface for difficult things,” while Thurston favored the view of “if you wanted to ruin comedy, you could study it.” Both, however, advocated nontraditional learning and learning-by-doing. Humor, of course, is a useful learning tool, but Thurston advocates other learning tools as being just as important as comedy: passion, empathy, connectivity, and organizing, to name a few. Thurston also gave a shout-out to the librarians in attendance by saying that the provision of information to everyone, regardless of wealth or background, was radical. Because librarians do not appear radical at first glance, he humorously compared them to spies. Ito and Thurston’s talk set the tone of the summit: a focus on play and hands-on learning-by-doing, as well as a discussion about principles of equity and justice.

The librarians in attendance appreciated this recognition. Vivienne Byrd, a librarian from the Los Angeles Public Library, commented that librarians are innovators, and that the conference was right to honor them because librarians are often on the cutting edge of this work. She is currently developing new citizen science initiatives in her library, and she thinks librarians are adapting to the technologies of the future while still ensuring that libraries are a place where learning and knowledge are accessible to everyone.

Michelle King, a longtime middle school teacher, learning instigator, and love activist, opened the second day with her all-conference talk. Her talk was rife with lessons – I recommend watching it in full! She had an approach to learning and teaching that was based in love. When I spoke with her after her talk, she told me that “love is a collaborative work of art, and the aspiration is the beloved community.” With her open, collaborative spirit, she was the perfect ambassador for connected learning.

Another conference organizer, Kurt Squire, Professor at The University of California, Irvine, member of the Connected Learning Laboratory, commented that the conference was about people coming together on equal footing to solve problems. On the same panel, Scot Osterweil, Creative Director of the Education Arcade and a research director in the MIT Comparative Media Studies/Writing Program, added to this, saying that the vision was about keeping the conference like summer camp, noting that “we bring our best selves that way.” The organizers sought to design a conference that they would want to attend.

By all accounts, they succeeded. This conference had the highest attendance for a final event that I’ve ever seen! This meant that SciStarter’s very own Lea Shell, one of the “ignite” speakers, had a very large audience at her talk, “Using Citizen Science To Connect Learners Across The Globe,” near the close of the conference. By sharing her love affair with entomology, she made the case for citizen science as empowering ALL people to do real science (coincidentally, that’s her twitter handle, @DoRealScience). She described her experience of taking her first entomology class as becoming “infested with an idea.” 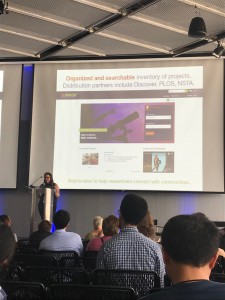 Because entomology was something she never thought she would try, but something that inspired her, she seeks to empower others by encouraging them to pursue hitherto untrodden paths of knowledge. Her presentation was rich in pictures of beautiful bugs and made the case for citizen science; by involving students and all people in the scientific process, citizen science allows scientists to not only communicate with the public, but also to enables the public to work WITH scientists to understand and protect biodiversity. Shell sited the benefits of specific citizen science projects, like Ant Picnic, showing that there was power in citizen science data.  She closed her talk by saying, “Thank you. Now, go look at some bugs.” Perhaps you could upload the pictures of those bugs on iNaturalist? Take a listen to her talk!

Connected learning is at the crux of citizen science: by connecting people of all ages to the real science they can do, we’re harnessing new technologies to encourage playful, engaging learning-by-doing. I definitely want to attend the Connected Learning Summit again next year and continue to make citizen science a part of this conversation. I hope to see you there! In the meantime, why don’t you start a project on SciStarter’s Project Finder? Learn something new while doing real science.

Want more than just these highlights? You can view videos from the summit here.

How on Earth Does Aquaman Fly in the *Justice League* Trailer?