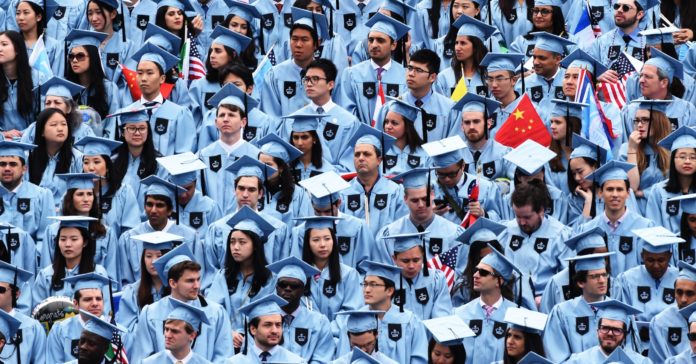 Last week, scientists published the biggest-ever study of the genetic influence on educational attainment. By analyzing the DNA of 1.1 million people, the international team discovered more than a thousand genetic variants that accounted—in small part—for how far a person gets through school. It made a lot of people nervous, as they imagined how this new research could be applied in Gattaca-esque testing tools.

But those concerns aren’t new—and neither is the kind of research published last Monday. This sort of correlational work for educational attainment has been in progress since at least 2011. And there is already a consumer product on the market that draws from that early research.

Log onto the Helix DNA marketplace—it’s like the app store for consumer genetic products—and the candy-colored website invites you to “Get started with DNA.” Clicking through takes you to one of Helix’s featured products: the DNAPassport. It was developed by Denver-based HumanCode, which Helix acquired in June, and lets users explore where their ancestors come from, whether they might be sensitive to gluten or lactose, and more than 40 other genetically-influenced traits. One of them is something called “academic achievement.”

It’s based on a single genetic variant called rs11584700, near a gene called LRRN2 that codes for a protein involved in neuron signaling. And it was discovered by the same consortium that published the massive genetic analysis on Monday.

Social scientists’ first attempts at unearthing links between genes and people’s behaviors, in the mid-2000s, were plagued by small samples, weak methods, and unreproducible results. So to save the field from itself, a behavioral economist named Daniel Benjamin, at the University of Southern California, borrowed an idea from medical geneticists. He convinced research organizations from around the world to pool their data, giving them enough power to run something called a Genome-Wide Association Study, or GWAS. The first thing they looked at was how long people stay in school.

In 2011, Benjamin founded the Social Science Genetic Association Consortium, along with David Cesarini and Philipp Koellinger. Their goal was to find a reliable measure of heritable influence on education attainment so that other researchers could control for genetics in their experiments, the same way they’d control for socioeconomic status or zip code. Since then, the SSGAC has uncovered more than 1,000 genetic variations associated with years of schooling. Benjamin’s team has gone out of its way to make it clear that each one exerts only a teeny tiny bit of influence—three additional weeks of education, max—and that even collectively, the variants are not powerful enough to predict an individual’s academic achievement.

But that’s not stopping companies from using their research to sell people insights into their degree-seeking behavior. Based on one of the consortium’s earlier papers, and a second one using data from the UK’s National Child Development Study, HumanCode added the academic achievement feature to its DNAPassport app last December. Users who’ve got a pair of G’s or an A and a G at that location will learn that those genotypes are “associated with slightly higher educational attainment in Europeans.” If your spit turns up an AA, well, no higher ed association for you.

“I’m not afraid to share that my own academic achievement SNP is not the desirable one,” says Chris Glodé, formerly the CEO of HumanCode, now a chief product officer at Helix, as he sends over a screenshot of his “Normal,” aka AA genotype. He says HumanCode made the decision to add the feature after seeing educational attainment show up on a number of third-party sites like GenePlaza, Genome Link, and Promethease. These are websites where people can go to upload the genetic data files they get from spit testing kits like 23andMe, Ancestry, and Helix, to further explore their DNA. “A lot of people are using these third-party services, so the idea that we’re going to prevent people from finding out this information for themselves seems not only unlikely, but also misaligned with our mission,” says Glodé. “The question then became, can we present this information responsibly?”

HumanCode sold DNAPassport on Helix’s marketplace even before the company was acquired. So its product has been subject to Helix’s scientific evaluation process since late 2017: The company requires that any variants used in a product are based on studies with more than 2,000 people whose results have been replicated. In the case of academic achievement, Helix also required that HumanCode list it with a disclaimer of sorts, called a LAB designation. “The research supporting the genetics underlying this trait require more work,” reads the site’s language. “Traits with the LAB designation may have limited scientific support from studies that are small/preliminary or lacking independent replication. Additionally, some traits with LAB designations have valid and replicated associations, but we want to learn more about how genetics influences the trait.”

About a quarter of DNAPassport’s traits fall under LAB designation. They’re all grouped together in the “Just for Fun” category of traits, “to reinforce that this information shouldn’t be used for making lifestyle decisions,” says Glodé. Sometimes, when new and better research comes out, traits get upgraded. If he were still the CEO of HumanCode and it was still an independent company, his team would probably update the academic achievement trait with the latest variants. But he says Helix has no plans to do that. Instead, it’s focused on encouraging developers to bring new products to its platform, including tests that might include educational attainment.

“Provided the context was appropriate, that a product was intended to be informational and educational, I think Helix would be open to it,” says Glodé. “But they would likely still require the results to presented the way we did in DNAPassport, providing additional qualifications that the research isn’t as well established as for traits like height and eye color.” And that the results don’t apply beyond people of European descent. Like the vast majority of genetic population studies, the SSGAC’s research cohort is overwhelmingly European, and the variants identified have little predictive power for non-European populations.

Benjamin—the SSGAC co-founder—says relying on his study’s genetic score to predict educational attainment for an individual would be inaccurate. Using just a single variant, even more so. “If companies want to do this I would be concerned that they’re accurately communicating the information,” says Benjamin. “It’s not just a matter of disclosing the limitations of the predictive power.” Along with other members of the consortium and its advisory board, Benjamin spent hundreds of hours writing a 27-page FAQ to accompany their paper, explicitly because of the potential for misinterpretation. He credits companies like 23andMe that use a rating system to communicate how confident users can be in the results.

While 23andMe has played a significant role in supporting research into the genetics of educational attainment—the company contributed deidentified data on 365,536 of its research-consented customers to the SSGAC’s latest study—it does not at this time offer a report for academic achievement. Nor does it have any educational attainment reports in the product pipeline, according to a company spokesperson.

Remember, no one knows exactly how these genes create a tendency toward degree-seeking behavior. They could influence how fast neurons fire, or they could make sitting at a hard wooden desk for eight hours not feel like torture. Maybe they remove the stigma of asking for extra time on tests or assignment extensions. Researchers will need to do a lot more work to figure out the why. But when they do, you can be sure someone will try to sell it to you.

GizmoCrazed - March 17, 2019 0
We’ve decided to step back from the breaking news for a minute to conduct a review of seed and early-stage funding trends over the...

The Future of NASA Space Technology

Sea Level Rise in the SF Bay Area Just Got a...