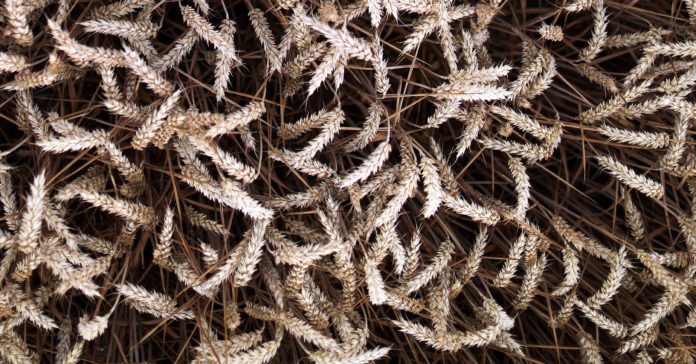 In a field at the edge of the University of Minnesota’s St. Paul campus, half a dozen students and lab technicians glance up at the darkening afternoon skies. The threatening rain storm might bring relief from the 90-degree August heat, but it won’t help harvest all this wheat. Moving between the short rows, they cut out about 100 spiky heads, put them in a plastic container, and bring them back to a growling Vogel thresher parked at the edge of the plot. From there, they bag and label the grains before loading them in a truck to take back to James Anderson’s lab for analysis.

Inside those bags, the long-time wheat breeder is hoping to find wheat seeds free of a chalky white fungus, Fusarium head blight, that produces a poisonous toxin. He’s looking for new genes that could make wheat resistant to one of the most devastating plant diseases in the world. Anderson runs the university’s wheat breeding program, one of dozens in the US dedicated to improving the crop through generations of traditional breeding, and increasingly, with the aid of genetic technologies. Today his toolbox got a lot bigger.

In a Science report published Thursday, an international team of more than 200 researchers presents the first high-quality, complete sequence of the bread wheat genome. Like a physical map of the monstrous genome—wheat has five times more DNA than you do—the fully annotated sequence provides the location of over 107,000 genes and more than 4 million genetic markers across the plant’s 21 chromosomes. For a staple crop that feeds a third of the world’s population it’s a milestone that may be on par with the day its domestication began 9,000 years ago.

“Having breeders take the information we’ve provided to develop varieties that are more adapted to local areas is really, we think, the foundation of feeding our population in the future,” says Kellye Eversole, the executive director of the International Wheat Genome Sequencing Consortium, the public-private research team that worked for more than a decade to complete the sequence. Founded in 2005, Eversole says the IWGSC’s goal was to help improve new crop traits for a changing world.

Breeding programs like Anderson’s are constantly on the hunt for wheat strains that will meet the needs of farmers facing tough economic and environmental realities. A 2011 study in Science showed that rising temperatures are already causing declines in wheat production. More recent research in Nature suggests that trend is only going to get worse, with a 5 percent decline in wheat yields for every one degree Fahrenheit uptick.

So what kinds of traits make for better wheat? The ability to grow in hotter climates is a plus. And disease resistance is nice. But farmers have other priorities, too. “When selecting a variety they’re looking at yield first, lodging resistance second, and protein content third,” says Anderson. Lodging is when a wheat stalk gets bent over, collapsing under its own weight. Stalk strength is one way to counteract that. But breeders have to be careful to balance those traits with others, like nutritional composition. “We’re trying to build disease resistance into a total package that’s going to be attractive to a grower,” says Anderson.

Building that total package is still a slow, labor-intensive process. Breeders painstakingly pluck out pollen-producing parts from each tiny “spikelet” on a wheat stem so they can fertilize each one with pollen from plants with other desirable traits; repeating that process thousands of times each year. Then they screen and select for traits they want, which requires testing how well thousands of individual plants perform over the growing season. In Anderson’s lab, which focuses on Fusarium head blight resistance, that means spraying test field plots with fungal spores and seeing which ones don’t die. It’s only in the last three years that he’s used gene sequencing technologies to help produce more survivors.

The plot his crew was harvesting on Tuesday was what’s called a “training population”: 500 individual plants selected to represent a larger group of 2,500 that have had their genomes sequenced. By combining the genetic data with their field performance data, Anderson can make better predictions about which plants will have the best disease resistance, and which genetic backgrounds will confer that trait.

To line up those gene sequences, graduate students in Anderson’s lab used an earlier, rougher version of the reference genome, which the IWGSC published in 2014. “That’s made it much easier to identify good DNA markers that serve as tags for genes that we’re interested in tracking,” says Anderson. The sequence published today, which covers 94 percent of the genome, as opposed to 61 percent, will be even more useful for tying specific traits to specific genes and starting to make tweaks.

The question then becomes, how exactly to make those tweaks? Unlike corn, soybean, and canola, no one has yet commercialized genetically modified wheat. Anderson at one time was working with Monsanto on a Roundup-Ready wheat, but the multinational dropped out of the partnership in 2004. “It was mostly cultural, and trade-related,” says Anderson. “The world wasn’t ready for it at the time, and it’s probably still not ready for it.” Some of the largest historical importers of US wheat—Europe and Japan—have been the most hostile to genetically modified foods.

“Bread is the heart of the meal,” says Dan Voytas, a fellow University of Minnesota plant scientist, and the co-founder of gene-editing agricultural company, Calyxt. “It’s kind of sacred, in the public perception.” Calyxt is among a bumper crop of start-ups racing to bring the first gene-edited products to market; it’s growing a new high-fiber wheat in its sealed greenhouses, located just a few miles away from Anderson’s test plots. Newer technologies like Crispr, zinc fingers, and TALENs don’t yet face the same cultural resistance, or as much red tape as first generation GMOs. A USDA ruling in March of this year declared the agency would mostly decline to regulate gene edited plants, provided they didn’t introduce any wildly distant genetic material.

The new reference genome promises to accelerate the development of new genetically engineered products, in addition to the crops coming out of traditional breeding programs. But as with most genomic work, the new wheat map has plenty of room for more detail. So far it’s mostly been manually annotated—meaning researchers went through by hand and added all the information they know about where genes are and how they function. Technology could help speed that up: The IWGSC is looking for support to fund a deep learning annotation pilot project. “We’re in a totally different time where we can try some of these high-risk, high-reward approaches that might give us 80 or 90 percent of the information and then we can go in and fill the gaps,” says Eversole. With its whopping 14.5 billion base pairs, the wheat genome might actually require some non-human intelligence to help it reach its full potential.

GizmoCrazed - December 22, 2017 0
Supporters of the Deferred Action for Childhood Arrivals, or DACA, chant slogans and holds signs while joining a rally in downtown Los Angeles on...

The Shutdown Shows Just How Vital Government Scientists Are

How Accurate Is Your Fitness Tracker?