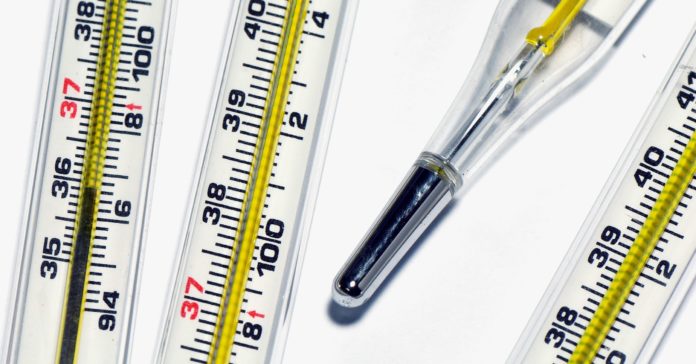 You wake up at 6 am feeling achy and chilled. Unsure if you’re sick or just sleep-deprived, you reach for a thermometer. It beeps at 99°F, so you groan and roll out of bed to get ready for work. Because that’s not a fever. Is it?

Yes, it is. Forget everything you thought you knew about normal body temperature and fever, starting with 98.6. That’s an antiquated number based on a flawed study from 1868 (yes, 150 years ago). The facts about fever are a lot more complicated.

First, there’s no single number for normal. It’s slightly higher for women than men. It’s higher for children than adults. And it is lowest in the morning.

“A temperature of 99 at six o’clock in the morning is very abnormal, whereas that same temperature at 4 o’clock in the afternoon can be totally normal,” says Jonathan Hausmann, a rheumatologist at Boston Children’s Hospital and Beth Israel Deaconess Medical Center in Boston, who gathered 11,458 temperatures in crowdsourced research using an iPhone app called Feverprints.

The study, published online this month in the Journal of General Internal Medicine, refutes the age-old benchmark of 98.6. Instead, Hausmann and his colleagues found an average normal temperature in adults of 97.7, as measured with an oral thermometer. (The published study uses results from 329 healthy adults.) As for fever, Hausmann found that it begins at 99.5, on average.

But that doesn’t mean you should shift to a lower benchmark for normal. Hausmann wants body temperature to be a flexible concept, viewed in context with age, gender, time of day, and other factors—much the way weight is evaluated based on height and the cutoff for normal blood pressure differs based on age.

Hausmann isn’t the first to push back on the definition of normal body temperature, but it’s been hard to topple 98.6. It remains on major medical websites. As for fever, the nation’s public health agency, the Centers for Disease Control and Prevention, gives 100.4 as the lower bound. But in a nod to fever’s slippery nature, the CDC notes that feeling warm to the touch or “feverish” is also sufficient.

So if you think you have a fever, you probably do.

Our internal thermostat lies in the hypothalamus, an almond-sized area of the brain that induces us to sweat when we need to cool down and shiver when we need to warm up. Body temperature rises with exercise, in hot weather, and after taking some types of drugs, including some antibiotics and antihistamines. Women also run higher temperatures during ovulation and pregnancy.

In the body’s first response to pathogens, proteins called pyrogens flow through the bloodstream to the hypothalamus, which responds by ramping up the heat. Fever helps your body fight infection by stimulating the immune system, sending a kind of alert to the body’s defenses. It also creates a more hostile environment for bacteria and viruses, making it more difficult for them to replicate. Though parents often worry when their young children spike a fever, a high temperature is the vanguard, not the enemy.

Unless a patient’s temperature is 103 or higher, family physician Leonard Reeves typically doesn’t advocate treating fever. “Your body is going to try to maintain an elevated core temperature no matter what you do,” says Reeves, who is on the board of directors of the American Academy of Family Physicians and practices in Rome, Georgia. “It’s best to find the source of the infection and fight that.”

This study isn’t the first to challenge the idea of one standard temperature, yet our culture has remained stuck on 98.6. That number was the work of Carl Reinhold August Wunderlich, a 19th-century German physician who wrote a seminal text using data from 25,000 patients. He concluded that 98.6 is the body’s normal “physiologic point,” and fever begins at 100.4.

Philip Mackowiak, an infectious disease physician who is now a professor of medical history at the University of Maryland School of Medicine, admired Wunderlich’s work but doubted the validity of 98.6. He analyzed the temperatures of 148 healthy volunteers and found an average of 98.2. There was nothing special about 98.6. It wasn’t the most frequent reading or the midpoint between the highest and lowest. In fact, only 8 percent of the volunteers had a temperature of 98.6.

His “aha” moment came when he learned that one of Wunderlich’s thermometers was at the Mutter Museum, in Philadelphia. Tests showed that the thermometer, a mercury-filled glass instrument about nine inches long, ran 2.9 to 3.2 degrees higher than modern digital thermometers. It was even calibrated higher than other thermometers of the same period in the museum’s collection. Wunderlich took patients’ temperatures under the arm, a method that produces readings that are lower (and less reliable) than temperatures taken orally, offsetting some of the disparity.

Mackowiak published his findings in 1992 and 1994 and began giving medical talks on the subject. But the 98.6 benchmark persisted. “Here’s the reason I think this concept has lasted for so long, that 98.6 just won’t die: People don’t want a complicated answer [about fever],” says Mackowiak. “You want yes or no and give me a number.”

Now Hausmann has taken up the cause—and found an even lower normal temperature than Mackowiak did. In the next phase of his Feverprints work, he plans to study whether fever-reducing medicines actually prolong illness, a subject of medical debate. He also hopes to learn how fever differs based on its cause—bacterial, viral or fungal infection, some types of cancer, hormonal disorders, or inflammatory diseases. Although crowdsourced data has its limitations—in this case, only iPhone users can install the app, which was created using Apple’s ResearchKit framework—Hausmann says his initial study shows it can produce reliable results.

To answer these questions, he intends to pair his app with wearable thermometers, which can send continuous readings to the app and collect higher-quality data as a result. “If we have enough people wearing those gadgets, we could understand fever patterns of different illnesses,” he says. That is why he coined the term “feverprint”—to recast the antiquated idea of one standard and to discover the unique “fingerprint” of a disease’s fever.