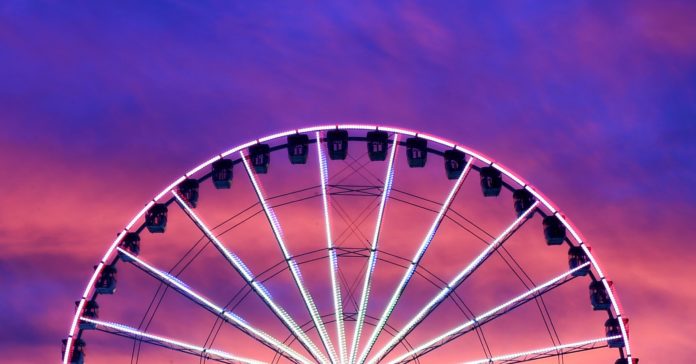 Here is what I like to do (for fun). Take a classic physics problem and go over the solution. After that, I take it just one step further to see what happens. Today, let’s start with this problem (you can find a version of this in just about every physics textbook).

You are riding a ferris wheel at the state fair. The wheel has a radius of 10 meters and takes 30 seconds to complete one revolution. What is your apparent weight at the top and bottom of the circular motion?

Where g is the value of the gravitational field with a value of approximately 9.8 Newtons per kilogram. This gravitational field (and thus the weight of an object) is essentially constant—even if you move further from the surface of the Earth like on the top of a mountain.

But here’s the weird thing about weight—we (humans) don’t really feel the gravitational force. Since the gravitational force pulls on all parts of our bodies, we don’t really detect it. Instead, we feel the force of stuff pushing against gravity—like a chair or the floor. We call this force of a surface pushing on an object the “normal force” since it’s perpendicular to the surface (normal means perpendicular).

The exact same thing happens to astronauts in orbit around the Earth. They are not actually “weightless,” they just feel that way because they are accelerating. Here is a full explanation if you want it.

OK, now back to the Ferris wheel. Why would the apparent weight change as you move from the top to the bottom of the ride? The answer is: acceleration. Acceleration is defined as the rate of change of the velocity. However, both velocity and acceleration are vectors such that it should be written as:

Yes. Just moving in a circular motion (constantly changing direction) but traveling at the same speed (magnitude of velocity) would be an accelerated motion. The direction of this acceleration is pointed towards the center of the circle based on the curvature of the turn. The magnitude of this acceleration increases with speed and decreases with the radius of the turning circle. Putting those two factors together, we get the following expression for the acceleration of a turning object (no change in speed).

The subscript “c” on the acceleration is to clarify that this is the acceleration of an objection moving in a circle only (usually the “c” stands for “centripetal” which literally means center pointing). The speed (in m/s) of the object is v, but the acceleration can also be calculated using the angular velocity (ω).

OK, that should be enough background material. Now let’s just figure out this ferris wheel problem. I will start with a force diagram of the human at the top of the ride.

Notice that there only two forces acting on the human (the red circle at the top). There is the gravitational force pulling down and the seat (the normal force) pushing up. These two forces do not have equal magnitude because the human is not in equilibrium but instead accelerating by moving in a circle. The direction of the acceleration at this instant is downward toward the center of the circle.

Using the force-acceleration relationship in this vertical (y-axis) direction, I get:

The sum of these two forces is equal to the product of mass and acceleration, but the acceleration is due to circular motion (and in the negative y-direction). I can solve for the force of the chair (the normal force) and this will be equal to the apparent weight.

This says that at the top of the ferris wheel, your apparent weight will be lower than your actual weight by some amount that depends on both the size of the ferris wheel and the angular velocity. From the initial problem, I have the radius (10 meters), and the angular velocity will just be 2π radians divided by 30 seconds (the time for one rotation). Putting these values into the equation, I could get the total force for a person with a mass of 70 kg to be 655 Newtons (compared to a weight of 686 Newtons). This isn’t a super low apparent weight—just 95 percent of what you would normally feel. In fact, if you have a giant ferris wheel rotating at a more normal speed you might not even notice anything.

OK, but what about the bottom of the ride? Here is the force diagram.

There are only two things that change when going from the top of the ride to the bottom. One thing that doesn’t change is the weight because neither the human mass nor the gravitational field change. But the two things that do change are the normal force and the direction of acceleration. The acceleration is now in the positive y-direction since the center of the circle is up. In order to make the net force in the positive y-direction, the normal force must be greater than the gravitational force.

Now the 70 kg human would have an apparent weight of 716.7 Newtons—slightly larger than normal weight. That is the answer to the traditional version of this question.

But what about a non-traditional question? What is the apparent weight at some other point in the motion of the ferris wheel? What about the point when the human is horizontally to the side of the center of rotation? Here is a diagram.

This is a problem you rarely see in traditional courses because it’s not quite as simple to solve. However, if you break it into x and y forces, it would look like this:

I’m not going to solve for these forces. Instead, I am just going to find the solution for all positions around the ferris wheel by creating a calculation in python. It’s just what I like to do. I’m going to make a basic program, but to start here is a visualization of the forces on a human going around a ferris wheel (full code here).

Note that this ferris wheel is rotating a bit faster than the one in the problem above so that you notice a visible change in the normal force (the cyan arrow). But what if you just want to plot the apparent weight as a function of angular position? This can be a bit tricky since the direction of acceleration keeps changing. One method to calculate the normal force is to break it into a component in the direction of the center of the circle (the radial direction) and a direction tangent to the circle. In this method, the gravitational force will have a changing component in these two directions that depends on the location of the rider. The radial force would be whatever it has to be to make the radial acceleration equal to the centripetal acceleration and then the tangent force just balances the tangental component of gravity.

Maybe it will make more sense if you look at the code. Here is the plot you get.

That’s nice. I like it. Oh, one last note. This is not a numerical calculation, this is just a plot. A numerical calculation solves a problem by breaking into many small steps. It’s still cool though (and useful). For instance, what if the Ferris wheel was bigger or smaller? What if it rotated faster or slower? You can change these variables in the code and see what happens to the apparent weight. Poof—just like that.