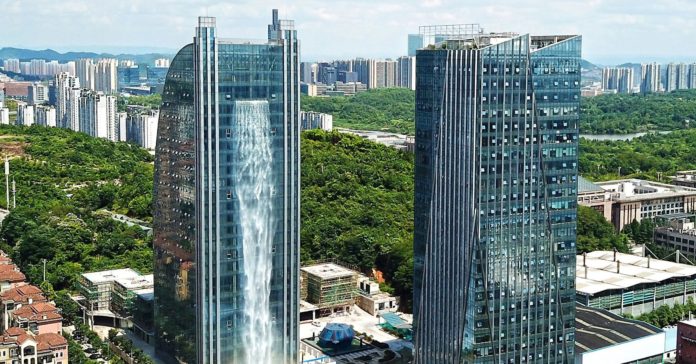 You don’t see this very often—a 350-foot artificial waterfall pouring out of a skyscraper. It looks cool, but it also looks expensive. Gushing water isn’t free: You not only have to get the H2O, but you need energy to bring it to the top of the building. This is why the building only runs this waterfall for short periods of time.

Since this real world example has some nice physics, it makes a great physics homework problem. Let’s estimate the power required (and the cost) to run this waterfall.

Why does this artificial waterfall require energy anyway? The work-energy principle says that the work done on a system is equal to its change in energy.

For this giant waterfall, I can assume the water moves up at a constant speed such that there is no change in kinetic energy. That means all of the work will just go into increasing the gravitational potential energy of the water.

OK, pause for a moment. There are two important things to look at here. First, notice that I chose a system and then used the work-energy equation. I did not just use something like initial energy equals final energy. In fact, that doesn’t work here. Even in the case of zero work, it’s still a good idea to start off with the work-energy equation. Second, it should be noted that the potential energy doesn’t matter. It’s only the change in potential energy that shows up. This means that there is no magical location where y = 0 meters. Anywhere can be y = 0, you just have to pick some place.

But we don’t really care about the work needed to move a mass of water. No, we want the power needed to keep moving water up to the top of this waterfall. Power is defined as the rate that work is done. Putting this together with the change in potential energy, we get:

No one wants to deal with a certain amount of time and a certain mass of water. So, let’s just put these two factors together. The mass divided by a time interval gives the mass rate—a measure of how much water (in kilograms per second) goes over the waterfall. I will call this “f” for flow rate. However, it’s really the one value to calculate the power that I don’t really know. If I estimate the waterfall has a width of 16 meters (I measured that from the video) and a depth of 20 cm flowing at 1 m/s, then it would have a flow rate of 3200 kg/s (using a density of 1000 kg/m3). Using this with a height of 108 meters, I get a power of 3.39 million Watts.

That’s fine, but that’s wrong. According to this site, the waterfall has a power requirement of 185 kWatts. If I use that power to calculate the flow rate, I get 174 kg/s. I feel comfortable with the width of the waterfall at 16 meters so I need to use this to get a new value for the depth and the water speed. Let’s go with a depth of 10 centimeters—that puts the water speed at 0.1 m/s. That seems OK.

Actually, this water speed would be even lower. That assumes that the electrical energy usage is 100 percent efficient. Maybe the depth is only 5 cm and the speed is a little bit lower.

How about some extra homework questions for you? Here you go.

GizmoCrazed - September 7, 2018 0
Marijuana may still be on shaky legal ground, but the therapeutic benefits of the psychoactive molecules — cannabinoids — inside the plant are solidly...

It's a Small Solar System After All