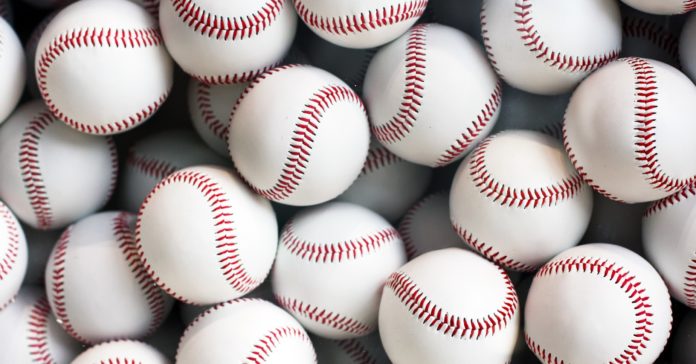 The best questions are always the ones that don’t have a single clear answer. In my physics classes, I like to present students with problems that can promote a lively discussion—and to do that, they have to have multiple answers that could possibly make sense. (And they shouldn’t involve lots of math, otherwise my students will just get hung up on the calculations.)

Here is a version of one of these great questions; it’s truly a classic.

A human (person A below) has two baseballs. The human tosses the two balls at the same time but to two different people (persons B and C as labeled below). The trajectory of each ball is shown. Which ball arrives at the person first? Defend your answer.

Just to be clear, there is no air resistance on these balls—just the gravitational force is acting on them after they are “tossed.”

OK, now you need to think about your answer. Pick the best possible answer and share with your neighbors. Yes, actually get out of the house and go to your neighbor’s house and see what they think about this question. It’s going to be the beginning of a great conversation. Trust me.

Since I really want you to pick an answer, I am going to delay going over this problem. Instead, let me point out why this is such a great question for an introductory physics class.

Like I said, it’s a great question. Now, because I am weak I will go over the solution. Look away if you are still thinking about this.

Let me start with a demo. This is a demonstration you can do yourself. Here’s what you do.

Take two coins. Place one on the very edge of a flat table so that it is just about to fall off. Now take the second coin and slide it shuffleboard-style so it hits the coin balancing on the edge. The horizontal sliding coin should fly off the table and hit the ground while the edge coin just falls and hits the ground. But here’s the cool part: They both hit the ground at the same time.

Here’s what this would look like (in slow motion).

Also, here is a numerical calculation of this same thing (so you can see it better). And here is the code on trinket.io if you want to play with it—try changing the starting velocity if you want to see what happens.

What exactly should you see? You should see that the two coins hit the ground at the same time. Why? Because both coins have the same starting vertical position and the same starting vertical velocity. In the vertical sense, the two motions are identical. And this is the key to projectile motion—an object moving under the influence of the gravitational force can be broken into two separate one-dimensional problems in which the only thing in common is time. In the horizontal direction, it’s a coin moving at a constant velocity. In the vertical direction, it’s a ball that starts off from rest and accelerates.

But what does this have to do with the two-baseball problem above?

To explain, we can look at another example: Two balls that are tossed straight up (just in one dimension). Here we go.

Also, the code—in case you need it.

What does this show? This shows that the ball that goes higher stays in the air for longer. Boom. That’s your answer. It doesn’t matter what the balls are doing horizontally. It only matters what they do in the vertical direction. The ball that goes higher (even when also traveling horizontally) stays in the air for longer. In the question above, person C gets the ball first.

Maybe you don’t believe me. Maybe you think it depends on the throwing speed. It doesn’t. Here is a real numerical calculation to show you how this works. Go ahead and click Play to run it.

See. It works. The ball that goes lower gets to the person the fastest. Go ahead and change the starting speed and see what happens. I made the “people” move so that they will be in the right position to “catch” the ball. You can change the launch angle too. Go ahead and have some fun with this.