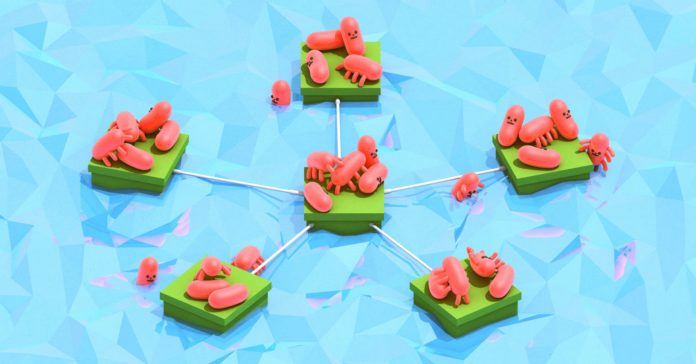 Natural selection has been a cornerstone of evolutionary theory ever since Darwin. Yet mathematical models of natural selection have often been dogged by an awkward problem that seemed to make evolution harder than biologists understood it to be. In a new paper appearing in Communications Biology, a multidisciplinary team of scientists in Austria and the United States identify a possible way out of the conundrum. Their answer still needs to be checked against what happens in nature, but in any case, it could be useful for biotechnology researchers and others who need to promote natural selection under artificial circumstances.

A central premise of the theory of evolution through natural selection is that when beneficial mutations appear, they should spread throughout a population. But this outcome isn’t guaranteed. Random accidents, illnesses and other misfortunes can easily erase mutations when they are new and rare—and it’s statistically likely that they often will.

Mutations should theoretically face better odds of survival in some situations than others, however. Picture a huge population of organisms all living together on one island, for example. A mutation might get permanently lost in the crowd unless its advantage is great. Yet if a few individuals regularly migrate to their own islands to breed, then a modestly helpful mutation might have a better chance of establishing a foothold and spreading back to the main population. (Then again, it might not—the outcome would depend entirely on the precise details of the scenario.) Biologists study these population structures to understand how genes flow.

Martin Nowak, who is today the director of Harvard University’s Program for Evolutionary Dynamics, began thinking about how population structures could potentially affect evolutionary outcomes in 2003 while studying the behavior of cancer. “It was clear to me then that cancer is an evolutionary process that the organism does not want,” he said: After malignant cells arise through mutation, competition among those cells selects for the ones best able to run rampant through the body. “I asked myself, how would you get rid of evolution?” Attacking mutations was one solution, Nowak realized, but attacking selection was another.

The problem was that biologists had only loose ideas about how specific population structures might affect natural selection. To find more generalizable strategies, Nowak turned to graph theory.

Mathematical graphs are structures that represent the dynamic relations among sets of items: Individual items sit at the vertices of the structure; the lines, or edges, between every pair of items describe their connection. In evolutionary graph theory, individual organisms occupy every vertex. Over time, an individual has some probability of spawning an identical offspring, which can replace an individual on a neighboring vertex, but it also faces its own risks of being replaced by some individual from the next generation. Those probabilities are wired into the structure as “weights” and directions in the lines between the vertices. The right patterns of weighted connections can stand in for behaviors in living populations: For example, connections that make it more likely that lineages will become isolated from the rest of a population can represent migrations.

With graphs, Nowak could depict diverse population structures as mathematical abstractions. He could then rigorously explore how mutants with extra fitness would fare in each scenario.

Those efforts led to a 2005 Nature paper in which Nowak and two colleagues showed how strongly certain population structures can suppress or enhance the effects of natural selection. In populations that have “burst” and “path” structures, for example, individuals can never occupy positions in the graph that their ancestors held. Those structures stymie evolution by denying advantageous mutations any chance to take over a population.

The opposite is true, however, for a structure dubbed the Star, in which fitter mutations spread more effectively. Because the Star magnifies the effects of natural selection, the scientists labeled it an amplifier. Even better is the Superstar, which they called a strong amplifier because it ensures that mutants who are even slightly more fit will eventually replace all other individuals.

“A strong amplifier is an amazing structure because it guarantees the success of the advantageous mutation, no matter how small the advantage is,” Nowak said. “Everything about evolution is probabilistic, and here we somehow turn probability into near certainty.”

Yet that certainty came with a catch. Most potential population structures didn’t seem theoretically capable of being strong amplifiers. A few others looked like possibilities, but they seemed contrived rather than realistic, and they were so complex that their status as amplifiers couldn’t be proved. (A formal proof that the Superstar works came out just two years ago from a group at the University of Oxford, and Nowak described it as an intricate paper “with about a hundred pages of dense mathematics.”) It was hard to see how population structure could boost natural selection among real living creatures except under highly unusual circumstances.

Not quite a decade ago, however, one of Nowak’s collaborators, Krishnendu Chatterjee, a computer science researcher at the Institute of Science and Technology Austria, also became interested in this problem. He and his group had already spent years developing an understanding of similar problems involving graph theory and probabilities, and they thought the intuitions and insights they had developed might prove useful on this evolution problem.

The key to constructing amplifiers, Chatterjee and his students Andreas Pavlogiannis (now at the École Polytechnique Fédérale de Lausanne, EPFL) and Josef Tkadlec learned, was in the weights of the connections within the graphs. They realized that all potential strong amplifiers would have certain features in common, such as hubs and self-loops. They then showed that by assigning the right weights to the connections, they could create strong amplifiers inside even simple population structures. “It came as a very big surprise to show that almost any population structure can become a strong amplifier by adjusting weights,” Nowak said.

All told, the recent and previous papers make a case for population structure as a meaningful force in evolution. Any populations that act like the “burst” will be evolutionary dead ends—advantageous mutations that appear within them will never take off, no matter what the details of the interrelationships might be. Other population structures may not automatically enhance natural selection, but most of them at least have the potential to amplify advantageous mutations and give evolution a helping hand.

The scientists’ findings come with some important caveats. One is that the population models in these studies apply only to asexual organisms like bacteria and other microbes. Taking into account the wholesale reshuffling of genes that occurs in sexual reproduction would massively complicate the models, Nowak and Chatterjee said, and to their knowledge, no one has yet seriously taken on that challenge. The consequences of allowing the modeled populations to grow or shrink also need to be determined.

Another issue is that although strong amplifiers guarantee that useful mutations will spread inexorably through a population, they don’t ensure it will happen quickly, Nowak said. It’s entirely possible that some populations might benefit from structures in which natural selection is less certain but more swift.

That’s an important consideration, agreed Marcus Frean, an associate professor at Victoria University of Wellington in New Zealand. Work that he and his colleagues presented in 2013 shows that the rate of evolution can slow down substantially even in population structures that amplify natural selection. The certainty that a mutation will take over a population and the speed with which it does might often oppose each other. “The thing we really care about—the rate of evolution—involves both,” Frean explained by email.

Nevertheless, Nowak, Chatterjee and their colleagues suggest in their paper that their algorithm for constructing strong amplifiers might still be useful to researchers working with cell cultures who want to foster the emergence of desirable mutants or to screen for faster-growing strains of cells. Microfluidic growth systems could be adjusted to produce any desired population structure by controlling how cells mix and migrate.

Perhaps a more intriguing application of their work, however, might be to identify where these strong amplifiers can already be found in nature. Nowak and his colleagues suggest that, for instance, immunologists could check whether populations of immune cells in the spleen and lymph nodes show these structural features, which might help speed up how quickly the body fights back against infections. If they do, it could prove that natural selection sometimes favors itself as a good solution to life’s challenges.

_Original story reprinted with permission from Quanta Magazine, an editorially independent publication of the Simons Foundation whose mission is to enhance public understanding of science by covering research developments and trends in mathematics and the physical and life sciences.

Instagram's botched experiment is a reminder that the future of Facebook...

The AI market is growing, but how quickly is tough to...

Rhino is getting rid of security deposits for rental apartments

Here's how 'Meltdown' and 'Spectre' got those terrifying names