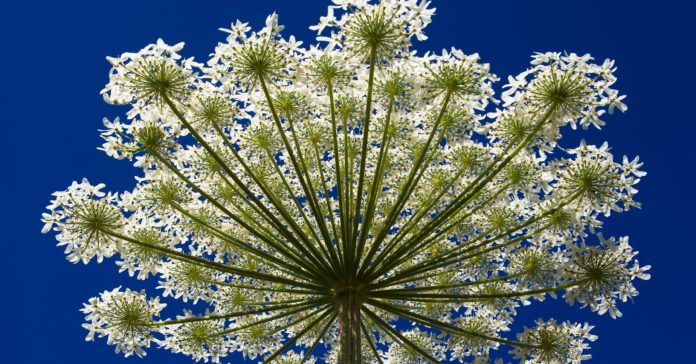 The giant hogweed is hard to miss. The monstrous plant towers up to 15 feet tall, with a crown of white flowers the size of an umbrella. They burst into bloom between the last week of June and the first week of July—just in time to be the perfect dramatic backdrop to red-white-and-blue-themed parties.

But whatever you do, don’t touch it. The giant hogweed’s toxic sap could give you third-degree burns if you don’t get out of the sun and wash it off immediately. Like an anti-sunblock, chemicals in its juices disrupt your skin’s ability to filter out harmful UV rays. Get it in your eyes and you could go blind.

In places where hogweed has been around for decades, residents know its risks well. But while the majestic flower of the hogweed adds a courtly presence to any landscape, it is an invasive species—producing up to 120,000 winged seeds at a time. In the mid-1900s it expanded across New York state, carried on the riverways it likes to grow near. It hopped into nearby Pennsylvania, Ontario, and then on into Michigan. About 15 years ago it invaded Ohio. Today it’s found sporadically in more than a dozen states—and it’s still spreading, putting more people in harm’s way.

In mid-June, Virginia agriculture officials confirmed the plant had been found for the first time in the state, at sites in three separate counties. In all three instances a property owner had planted the invasive species intentionally—just as early Americans had in some of the nation’s first botanical gardens. One person bought the seeds at a farmer’s market, where they were misidentified as the herb angelica. At another, the planted specimen had spread its seeds across a nearby pond, sprouting more than 100 new plants.

For now though, state agencies believe those sites are contained and say the plant isn’t spreading in the wild. But they are investigating the flood of reports from concerned citizens. Giant hogweed is one of three plants listed as Tier 1 noxious weed in Virginia, meaning it’s considered a major threat to the surrounding agricultural environment, and its trafficking is highly regulated. So it’s got people on high alert.

“We’ve been getting calls and emails with parents afraid to let their children outside,” says Elaine Lidholm, a spokesperson for the Virginia Department of Agriculture. And rightly so. Hogweed sap contains a class of chemicals called furocoumarins that absorb specific wavelengths of light. Those excited molecules bounce around in skin cells causing DNA damage and cell death, starting with blisters and a raised rash. The more time you spend in the sun, the more energy they absorb, damaging tissues even further down, which can result in second- and third-degree burns.

Other plants and foods can induce similar symptoms of phytophotodermatitis—like limes, figs, carrots, and celery. But none of them are as potent as the hogweed.

Luckily, most of the photos the agricultural department has received turn out to be one of the more common lookalike plants—Queen Anne’s lace, otherwise known as wild carrot. Cow parsnip is another one that’s easily mistaken for its dangerous cousin. One way to tell them apart is to look closely at the junction where the plant’s leaves meet its stem. “If you see coarse white hairs and a splotchy purple, reddish mark on the stem, that’s a good indication you’ve got giant hogweed,” says Michael Flessner, a weed science specialist at Virginia Tech.

It’s always better to report a sighting if you’re unsure, though. Flessner recommends taking a photo with someone in it for scale and marking your GPS location if you think you’ve found one, so you can report it to local agriculture officials later. In states where the plant has become endemic, it’s routinely exterminated and monitored to make sure it doesn’t get out of control.

Hogweed’s story is like that of most of America’s other invasive plants; an escape from a garden into the wild, where its prolific seeding bullies out endemic species. These invaders can reduce plant diversity until a landscape can no longer support native communities of wildlife. Hogweed also uses its size to its advantage; its dense canopy steals sunlight away from lower-growing stream-side plants, which can’t compete in the shade. But unlike America’s other top invaders—plants like purple loosestrife, Japanese honeysuckle, and kudzu—hogweed also presents a serious health hazard to humans.

However, getting rid of a giant hogweed is easier said than done. In addition to that prolific seed-shedding flowerhead, the plant sends down a tuberous root the size of a Volkswagen that can be nearly impossible to dislodge. “If you cut down the plant before it’s had a chance to flower, it’s smart enough to know that and it will come back the next year,” says David Marrison, an Ohio State Extension scientist.

Every few years Marrison gets a call about a plant that keeps popping up under a covered bridge in Ashtabula County. “You have to stay on top of these things, because if left unchecked, pretty soon entire areas will be overrun by this plant,” he says. “It will just choke out everything.” He’s got a note on his desk right now to go check it out.

GizmoCrazed - September 28, 2020 0
Want to help save the planet using a free, ancient resource? Look at the sun. Solar power is booming in popularity. Over the last ten...

Carbo brings its light and peppy electric bike to the US

The Hover-1 Cruze is the only electric skateboard that doesn't terrify...