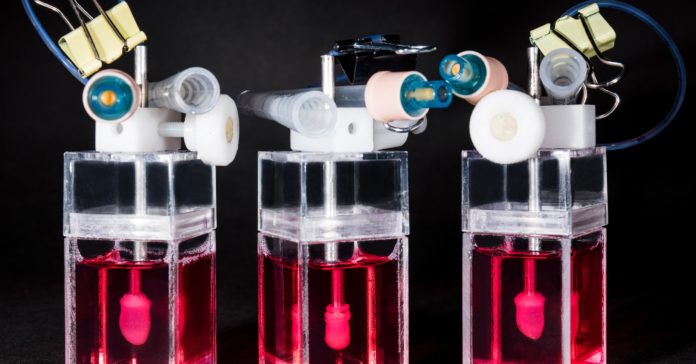 Crack open the door of the incubator at Novoheart’s Hong Kong headquarters and you’ll find about a dozen pea-shaped, pulsating blobs submerged in a warm, salty-sweet broth. They’re 3-D human heart organoids—a simplified, shrunk-down version of the real thing—and are the first ever to contain a hollow chamber, like one of the four that’s beating inside your chest right now. Meet the future of drug testing.

Pharmaceutical firms typically spend billions of dollars and a decade to successfully bring a new medicine to market. Drugs are often felled by harmful side effects that don’t get detected until costly human trials—and the heart is the number one place where things can go wrong. So drugmakers have been looking for ways to identify cardiac issues sooner rather than later.

Miniature hearts respond to treatments a lot like real tissues do: They speed up or slow down, get weaker or stronger. The companies that make them—like Novoheart and New York-based Tara Biosystems, which makes a flat, petri-dish version of live human heart tissue—can measure those changes and send that data back to drugmakers, so they can flag potential problems before any real humans get involved (or hurt). In the last few years, these firms have racked up contracts with top pharma firms to create an early-warning system of sorts.

The idea of using tiny, artificial organs to test drugs isn’t new. But getting the biology to actually work is a recent development. The main problem is that heart cells in culture just don’t want to grow up: To work, they have to mature into all the different kinds of cells that make up an adult human heart. Without that differentiation, they lack many of the proteins where drugs could dock.

When Kevin Costa, Novoheart’s cofounder and director of cardiovascular cell and tissue engineering at Mount Sinai’s Icahn School of Medicine, first started working on mini-hearts, scientists could only grow cells in single layer on a dish. There they could wriggle in place, but they couldn’t contract against a load—which is the thing a real heart does approximately 70 times every minute. To do that, scientists had to bring the cells into the third dimension. They nudged them into free-floating clumps, or spheroids, where unencumbered by flat surfaces they began to develop into some of the different cell types found in natural heart tissue.

But they still weren’t functioning like heart tissue. So next they began organizing those cell types into sheets. Heart muscle is kind of like plywood—made up of layers of distinct cells aligned in different directions, which together allow the tissue to contract with force in response to electrical pulses. Yet even after all that, the engineered tissue strips were still missing some key functions. Costa wondered if just being in the shape of a ventricle could give them many more of the properties found in natural heart muscle.

Getting these layered structures to form a hollow heart sphere, however, took some real creativity.

Novoheart’s scientists placed millions of heart cells genetically reprogrammed from stem cells into a mold along with some secret sauce: a dose of dermal fibroblasts, the cells that help your skin repair itself. That created a mix of cell types that better mimicked natural tissues. Like Jell-O, they glommed onto each other in the shape of an empty globe. Costa says the 3-D tissues are still more like baby hearts than adult hearts, but they respond more realistically than the strip-shaped version. “We don’t fully understand why the hollow sphere responds more like the real thing,” says Costa. “Is it something about fluid slushing around inside it? Do shear stresses impact cell development? It’s not clear to us yet, but there’s definitely something unique about being in that shape. It acts like a heart, so it is a heart.”

Of course, it’s not really a heart. But it is good enough for a bunch of pharma companies to be interested in using it to test for drug toxicity. What’s more, Novoheart is using their mini-hearts to better understand diseases. It just completed a study in partnership with Pfizer to develop a mini-heart model for Friedreich’s ataxia, a rare but deadly hereditary neuromuscular disorder that currently has no FDA-approved treatments. Using cells with the genetic mutations associated with the disease, Novoheart was able to reproduce similar electrical and mechanical malfunctions. Costa hopes it’s just a first step toward creating a whole library of diseased mini-heart models to aid in discovering new medicines, particularly for disorders that lack credible animal models.

Tara Biosystems is also working toward that goal with its tissue strips. Beyond that, it has plans to one day become a platform for personalized drug testing—seeing how heart cells with different genetic backgrounds respond to treatments. But for now, it’s focused on generating 200 new cultures each week to satisfy the growing demands of its 10 pharma clients.

From a regulatory standpoint, their timing couldn’t be better. The FDA is currently considering a new safety screening approach for detecting life-threatening cardiovascular side effects in new drugs. The system would use both computer simulations and tests on the same kinds of cells that make up Tara’s tissue strips and Novoheart’s cardiac chambers.

“The FDA itself has recognized that the assays that are currently universally used are not great, and it’s looking for alternatives,” says Nate Huebsch, a bioengineer at Washington University who’s working with Bay Area startup Organos to develop miniature tissues for drug testing. Even though he’s technically a competitor, he’s impressed by the work coming out of Tara and Novoheart. “Both these companies are helmed by big-time leaders in this field doing cutting edge science,” he says. Huebsch also stresses a dose of reality: Mini-hearts aren’t going to fully replace animal models anytime soon. But they could still stop dangerous drugs before they stop a real heart for good.

The Food Digester: A New Way to Combat Food Waste

GizmoCrazed - April 30, 2020 0
Around the world, about 1.3 billion tons of food is wasted each year. This is equivalent to one-third of all food produced for human...

iPhone 5 To Launch In Second Week Of September [Report]

Scientists Are Citing Patents for Things That Don't Actually Exist

What I Learned Studying Real Vampires