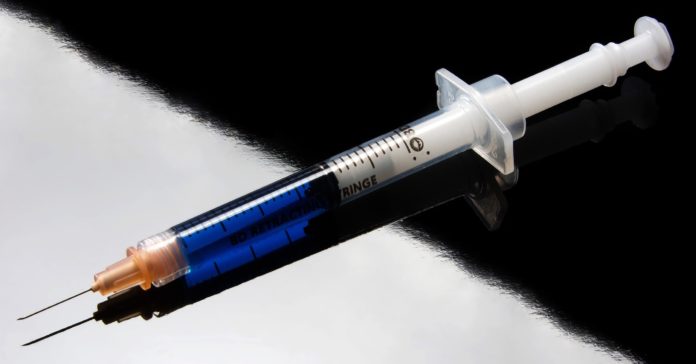 A district court judge today halted the execution of Nevada death row prisoner Scott Dozier—a man who has repeatedly expressed his desire to die—hours before he was scheduled to be put to death with an untested injection of three drugs: midazolam, fentanyl, and cisatracurium.

The temporary injunction hinges on midazolam, a sedative produced by pharmaceutical company Alvogen. It doesn’t want anyone using its drug to kill people, and claims Nevada prison officials obtained the drug illegally. The company has demanded the state return its midazolam supply and not use it in Dozier’s execution.

But the truth is, every one of the drugs that the state of Nevada planned to use in Dozier’s execution is embroiled in some form of controversy. Midazolam has been implicated in botched executions in no fewer than four states, in which prisoners were witnessed lurching, coughing, jerking, and gasping for breath for minutes on end before they died. Fentanyl, while horrifyingly adept at killing victims of America’s opioid epidemic, has never been used by the state to execute a criminal via intentional overdose.

But it’s the third drug—a muscle relaxant called cisatracurium, commonly used in surgical procedures but never publicly used for an execution—that sits at the heart of legal and ethical debates over state-sanctioned killings, including Dozier’s.

Last November, in a hearing over the experimental three-drug cocktail, a district court ordered that Nevada could administer midazolam and fentanyl during Dozier’s execution, but not cisatracurium. Judge Jennifer Togliatti’s concern was that the paralytic could subject Dozier to “an unacceptable risk of pain and suffering.”

The fear, in essence, was that cisatracurium would work as pharmaceutical developers intended it to. A neuromuscular-blocking drug, doctors have used it for years to prevent patients from moving during surgical procedures. Cisatracurium-induced paralysis tends to affect the muscles in the eyelids first, then the jaw, limbs, abdominals, glottis, and diaphragm. When the diaphragm goes, so does your ability to inhale; surgical patients administered the drug are typically intubated with a breathing tube, their respiratory status carefully monitored.

What cisatricarium doesn’t do is diminish consciousness or dull pain. That, in theory, is what the midazolam and fentanyl are for. Under medical supervision and by way of long-established surgical protocols, cisatracurium is safe, even helpful. But it’s possible an execution subject dosed with the stuff in an untested cocktail would exhibit no outward signs of pain or agony caused either by the administration of other drugs, or by the suffocation brought on by a collapsed diaphragm. To an outside observer, they might appear totally calm as they suffocated, painfully, to death.

Which is actually kind of the point. “The original justification for the use of a paralytic agent—which is usually vecuronium bromide but in this case is cisatricarium—was to preserve the dignity of the prisoner,” says Robert Dunham, executive director of the Death Penalty Information Center. To keep them from seizing, convulsing, or exhibiting any other outward signs of the adverse effects of the drugs that were actually killing them. By the same logic, dosing prisoners with paralytics can also make executions less traumatic for witnesses. It’s emotional remove, pharmacologically induced.

Of course, the drawback of sparing onlookers’ psyches with paralytics is that it makes it impossible to assess if the execution is inhumane—whether the prisoner is conscious of or sensate to or in agony over the drug that is at that moment killing them.

All of which factored into the Togliatti ruling, last November, that Nevada could execute Dozier with midazolam and fentanyl, but not cisatracurium.

But that judgment was short-lived. In a unanimous ruling announced in May, the Nevada Supreme Court decided not on procedural grounds—not pharmacological ones—to reverse the lower court’s decision. The state could proceed with its untested, three-drug cocktail.

And for the past couple months that was the plan. Dozier is what’s known in legal circles as a “volunteer”. Not only has he stated he wants to die, he’s given up his right to legal appeals. “I’ve been very clear about my desire to be executed … even if suffering is inevitable,” he wrote in a note to judge Togliatti in November. Normally, Dunham says, the public interest in ensuring that the state does not execute somebody inhumanely is brought forward by prisoners seeking a judicial determination about the propriety of the drugs that will be used to kill them. “But in the US, when one of the parties is no longer taking issue, nobody else has legal standing to step in and do that.” If Dozier won’t fight for his right to a humane death, nobody else can do it for him.

Which is why the legal battle that has, at this late hour, temporarily spared Dozier from death actually doesn’t have to do with ethics or morality or the protection of human rights. Avogen demanded Nevada return the midazolam it intended to use in Dozier’s execution. It’s a property dispute.

Which means that if and when Dozier is given the death he desires, it might no longer involve midazolam, but it will almost certainly still entail the injection of an untested—and potentially agonizing—cocktail of drugs.