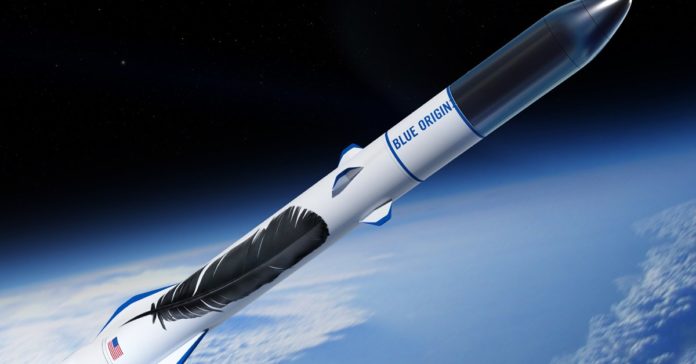 Space: final frontier or ultimate tourist destination? Possibly both—provided you have the cash.

Already, you can buy tickets for (as-yet-unscheduled) flights aboard SpaceShipTwo, the crew vehicle developed by Richard Branson’s Virgin Galactic. And at a NewSpace conference in Seattle last month, Blue Origin—helmed by Amazon founder Jeff Bezos—announced that it has plans to sell tickets to wannabe space tourists as early as next year.

Both companies have solid plans to cash in on human space travel (and then, of course, there’s SpaceX, which will focus first on shuttling astronauts to and from the space station). Branson has said that Virgin Galactic is in a race with itself, not other companies, to achieve safe human space flight. But with Blue Origin aiming to start selling tickets next year, both companies could be competing for business sooner rather than later.

They’ll have to work hard to differentiate themselves: Blue Origin and Virgin Galactic plan to offer pretty much the same experience. Neither will take tourists into orbit; instead, they’ll touch of the edge of space, crossing an imaginary boundary known as the Kármán line 62 miles up. It’ll be like reliving the first flights of Alan Shepard and Gus Grissom, says veteran NASA astronaut Tom Jones. “On this trajectory, passengers will get about five minutes of weightlessness,” he says, “and the entire ride from motor ignition to landing will be 15 to 30 minutes.”

The differences come down to propulsion. Virgin Galactic’s plan is to launch its two-winged SpaceShipTwo while it’s attached to a carrier vehicle, WhiteKnightTwo. Reminiscent of the X-planes that originally broke the sound barrier, the SpaceShipTwo will drop from its carrier, ignite its rocket engines, and then land on a runway like a commercial airliner.

Blue Origin, meanwhile, will use a more traditional capsule and booster, both of which are designed to be reusable. After the rocket has done its part, the crew capsule will separate and the booster will plunge towards the Earth, where it will reignite its engines to touch down gently at the landing site. The crew capsule will then deploy a trio of parachutes to float to the ground. “Both can work,” says Jones. “Perhaps the simpler capsule is cheaper to develop and fly than a spaceplane, but the spaceplane may be able to fly more frequently, not requiring parachutes and a desert, off-runway landing.”

According to the company, Virgin Galactic has already sold nearly 700 seats for $250,000 each, though it’s still testing its vehicle after a fatal crash in 2014 when one of the craft’s two pilots turned on the landing mode prematurely. The redesigned SpaceShipTwo now has two piloted, powered flights under its belt, though they haven’t reached peak altitude. During the most recent flight on May 29, the craft’s rocket motor performed as expected, and if the testing continues to go well, Branson could be the first flyer later this year.

To date, Blue Origin has conducted eight successful test flights, most recently in April, and its next test flight is planned for later this summer. But while the crew capsule and rocket have passed all tests so far, they have yet to actually launch people. Blue Origin says it won’t take deposits (price unknown) until human test flights prove successful—so with a promise of ticket sales next year, we could expect to see a crewed flight in 2018.

Jones think that’s an ambitious goal. “I think 2019 may see test flights, and then passenger flights, of both ships,” he predicts. But before they get to that point, both Virgin Galactic and Blue Origin will have to meet the safety standards imposed by the Federal Aviation Administration—rules more in line with commercial airliners than space shuttles. (Only SpaceX’s space taxis will need to meet NASA’s safety regulations, as they travel at higher speeds and actually break free of Earth’s surly bonds).

The first astronauts bound for a trip to the space station are scheduled to board its slick new space taxi in December, and NASA will give SpaceX the chance to ferry private citizens into space along with astronauts. Jones would prefer to be on a vehicle that met NASA’s safety standards. “That worked for me,” he explains. “NASA rightly ranks safety very high in its flight priorities. However, that makes the price go up, and competition and low price will need to be balanced against safety performance by commercial operators.”

But airline travel, after all, is one of the safest forms of travel. That’s one reason why New Horizons principal investigator Alan Stern already has three seats booked on Virgin Galactic on behalf of Southwest Research Institute. These flights aren’t just for tourists: They also offer a simpler way to do science in space, allowing researchers to fly with their experiments and conduct them in microgravity. Stern expects to book flights with Blue Origin as soon as it starts selling seats.

When asked about the risks of this very hands-on form of science, Stern is sanguine. “I’ve flown on airplane models that have crashed and that hasn’t deterred me from flying,” he says. “I think these companies know that if they don’t have a good safety record, they won’t have a customer base.” We’ll be keeping a close eye on those test flights.