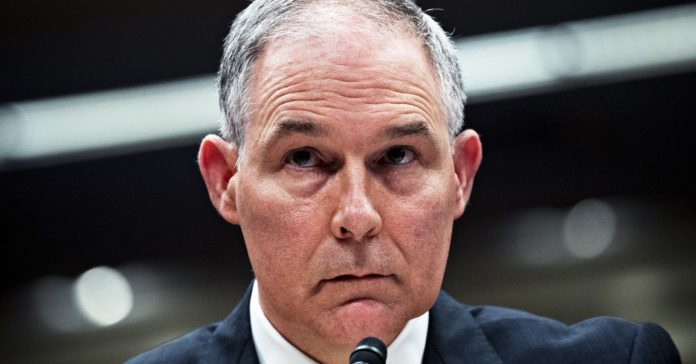 Gone is the boss who loved first-class travel to places like Morocco and Rome, forced his staffers to find him an apartment (and a used Trump hotel mattress), and asked fast-food executives to hire his wife. But EPA administrator Scott Pruitt’s many scandals haven’t been the real bugaboo for environmental advocates—rather, it’s been his rollback of environmental regulations on toxic waste, tailpipe emissions, air pollution, and greenhouse gases.

And in fact, Pruitt’s replacement might be more effective at gutting environmental protection than Pruitt himself.

Pruitt left office Thursday after questions of lavish spending, mismanagement, and ethical lapses. He was the target of 13 investigations by the EPA’s own inspector general, according to The New York Times. In June, a federal judge ordered Pruitt to produce documents supporting his statements on CNBC that humans were not a major contributor to climate change.

So when Pruitt’s resignation was tweeted by President Trump on Thursday afternoon, there was relief among many EPA employees, according to Jeff Ruch, executive director of Public Employees for Environmental Responsibility, a non-profit legal group that represents civil servants from several federal agencies. “They were overjoyed,” said Ruch, who spoke to several EPA employees after Pruitt left. “It was ‘Ding-dong, the witch is dead.’”

In fact, the scene outside EPA headquarters in Washington got a bit nutty yesterday afternoon, as a man wearing an oversized papier-mâché Pruitt head posed for pictures with happy EPA staffers.

That glee may be fleeting. For now, Pruitt’s replacement is Andrew Wheeler, a coal industry lobbyist who worked briefly at the EPA 25 years ago and will return as the acting administrator. He was approved as deputy administrator by the Senate in April 2018, but Wheeler would face a second Senate vote if Trump nominates him to become the permanent agency head.

From 1995 to 2009, Wheeler was a staff member for James Inhofe, a Republican senator from Oklahoma who is one of Congress’s fiercest climate-deniers. Then, as a lobbyist, Wheeler represented the largest coal-mining operation in the United States, Murray Energy, for more than a decade. In 2017, Murray Energy gave Pruitt an “action plan” to overturn existing EPA rules on mercury pollution, greenhouse gas emissions, and air pollution that crosses state lines.

So far, the White House and other federal agencies are on track to pass 16 of the rollbacks. Under Wheeler, “the administration’s agenda won’t change,” says Vicky Arroyo, executive director of the Georgetown Climate Center, a non-profit group at the Georgetown Law School that works with state officials on federal environmental regulatory issues. “Because Wheeler has deeper roots in DC, knows his way around these issues, and has built more relationships than Pruitt,” Arroyo says, “he might be more effective at completing [the White House] agenda.”

Just as Pruitt urged Trump to abandon the Paris Climate Agreement, Wheeler has attacked mainstream climate science, writing in 2010 that the UN’s International Panel on Climate Change was biased. “The UN IPCC has blurred the lines between science and advocacy to the point where they are unable to separate situational awareness from proposed remedies,” Wheeler wrote in a blog on his law firm’s website. “They have been advocating for specific policy actions and ignoring the original charter of informing the public on the state of science.”

At his Senate confirmation hearing in November 2017, Wheeler was noncommittal when faced with the federal government’s own climate report. “I believe that man has an impact on the climate, but what’s not completely understood is what the impact is,” Wheeler said during the hearing. At least on climate science, Pruitt and Wheeler are speaking from a similar book.

That matters because the Trump administration continues to block the Clean Power Plan, which seeks to limit greenhouse gas emissions from plants that burn fossil fuels. The plan was developed by President Obama, but Trump’s EPA reversed course and is now asking a federal court to oppose it. The Supreme Court blocked the plan from going into effect until a lower court can rule on its merits.

Under Wheeler’s tenure, Arroyo expects that her work will continue, with several states who are suing the EPA to enforce the Clean Power Plan, toxic air pollution rules, and climate protection rules. “It’s not a new day,” she says, “but we all have to be relieved that someone who is so blatantly corrupt is let go.”

GizmoCrazed - August 16, 2013 4
When deciding to travel, where would you like to visit? Paris, Rome, London, New York City are all great options but here is a...

Voting is a social experience