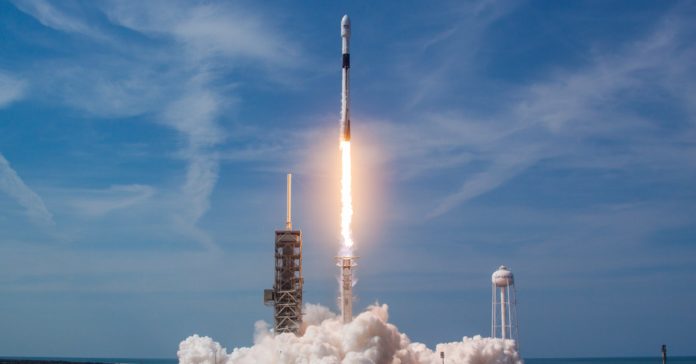 This weekend, SpaceX began what is slated to be its busiest week ever by successfully launching its largest payload to date: a communications satellite dubbed TelStar 19V. Perched atop the company’s Cape Canaveral launch pad, a shiny new Falcon 9 rocket roared to life at 1:50 am Eastern on Sunday morning, lighting up the predawn sky. It was the 13th launch so far this year for SpaceX—and, notably, the first of three Falcon 9 Block 5 booster launches scheduled for the next 12 days.

SpaceX equipped the Block 5 booster with several upgrades designed to make it more capable than its predecessor, the Block 4. They include improved engines, a more durable interstage, titanium grid fins, and a new thermal protection system. Together they help the rocket pack a bigger punch, more safely, more often: On Sunday, the Block 5—known internally as B1047—not only delivered its hefty payload to orbit, it also landed aboard an autonomous drone ship waiting out in the Atlantic.

Sunday’s booster was only the second Block 5 that SpaceX has ever launched. The first went up in May, when the upgraded rocket ferried Bangladesh’s first satellite, the Bangabandhu-1, into orbit. Since then, SpaceX engineers have been working diligently to prepare the next generation of Falcons for service, while the company cleared its inventory of Block 4 boosters.

Now, SpaceX’s third Block 5 Falcon is ready to fly. Just three days after delivering its heaviest payload to space, the company will launch another upgraded Falcon 9—this time from its California launch site. The flight, scheduled to lift off at 7:39 am ET on Wednesday, marks the penultimate launch for the Iridium NEXT program. With six Iridium launches under its belt already, the Falcon 9 will deposit an additional 10 satellites into orbit, upping the communication giant’s tally to 65. Later this year, SpaceX will deliver the final 10, completing the constellation.

SpaceX’s ultimate goal is to reduce the cost of spaceflight by making rockets that are fully and rapidly reusable. Currently, a Falcon 9 rocket costs around $62 million, with the bulk of that expense stemming from hardware like the first stage booster. So while SpaceX is currently rocking the reusable first stage booster game, it’s not enough. Musk would like to see much more of each rocket be reused, so that one day the only major expense would be the fuel.

To that end, SpaceX has added a vessel dubbed Mr. Steven to its West Coast recovery team. Just as the company’s drone ship can catch returning boosters at sea, Mr. Steven will attempt to recover the rocket’s payload fairing—the protective nose cone that shields the rocket’s cargo as it travels through the atmosphere.

That would be a big win for SpaceX. The fairing, which historically has been a one-time-use component, is an expensive piece of hardware, accounting for about 10 percent of the Falcon 9’s total price tag. Currently, after separating from the rocket’s upper stage, the two halves of the fairing navigate back to Earth before a parachute deploys and they splash down in the ocean. Salt water is corrosive, and to cut down on the damage done and the amount of refurbishments needed, SpaceX wants to catch the fairing halves in a net before they touch the water.

Mr. Steven, outfitted with claw-like arms attached to a giant net, has been unsuccessful in its attempts to snag the fairing halves so far. But SpaceX hopes that is about to change. In preparation for Wednesday’s flight, the 200-foot-long recovery vessel received a set of upgrades, including a brand new net that spans nearly 40,000 square feet—some four times the area of its predecessor. The last time Mr. Steven was used, the fairing landed within 160 feet of the ship, so SpaceX is hoping the increased surface area will help seal the deal.

Following the dual-coast double header, SpaceX has another trick up its sleeve: launching a third Falcon from Florida on August 2. The third Block 5 launch in less than two weeks is expected to deliver an Indonesian communications satellite into space before touching down on the company’s drone ship.

Then, just two weeks later, SpaceX will launch its fourth mission in under a month, also from its Cape Canaveral launch site. This marks a pretty consistent two-week launch cadence from that launch site. Musk has said that the Block 5 is designed to fly as many as 10 times with little-to-no refurbishments between flights.

To date we’ve only witnessed brand-new Block 5 rockets take flight. As more take to the sky, Musk says that eventually we will see a Falcon 9 launch, land, and relaunch in the same day—but we’re not quite there yet.