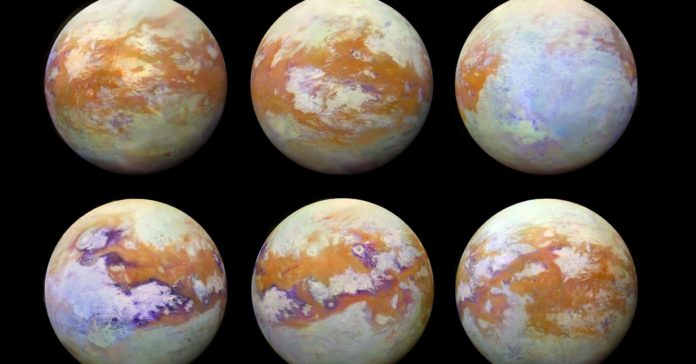 Front and center for this week’s jaunt into space is one of the most interesting—and possibly habitable—moons of our solar system. As the largest moon of Saturn, Titan measures about 3,200 miles in diameter, bigger than our own moon (which is a little over 2,000 miles wide). It’s covered in a thick atmosphere of clouds and haze that likely condenses onto the surface—and there might be organic compounds within.

So let us have a look at Titan like we’ve never seen before, thanks to the Cassini spacecraft’s Visual and Infrared Mapping Spectrometer. Earlier views were hampered by variations in resolution and lighting that reduced the surface clarity. (Blame tiny particles in the moon’s atmosphere called aerosols for scattering visible light.) But now astronomers are now able to peer below the clouds of Titan in the infrared spectrum, along with combining 13 years of image data—the entire length of time that NASA’s Cassini was in orbit.

It gets better. Titan has lakes and rivers, but unlike the lakes and rivers on Earth that are filled with actual water, Titan’s are made up of liquid methane and ethane. Scientists are still studying the provenance of these liquids and how they remain stable. Here’s a hint: Titan’s surface is a stone-cold -290 degrees Fahrenheit.

So put on a Mylar sweater, bring some oxygen, and enjoy pioneering to Titan!

Once you’re done dipping into a dwarf planet and beholding a nebula, peruse Wired’s full collection of space photos here.

IBM Created a Macro-Molecule to Destroys All Viruses

22 Illustrations That Show How Smartphones Take Over Our Lives