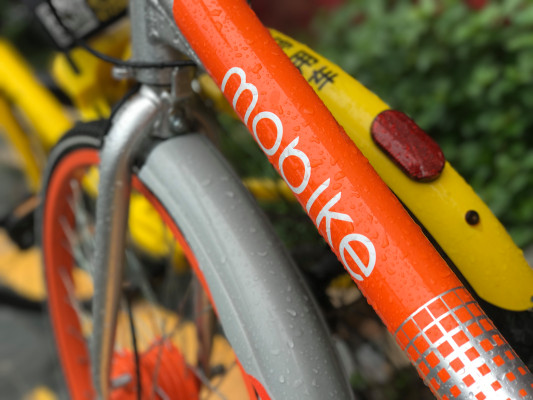 Mobike made a roster of announcements about its bikesharing program today, including the end of customer deposits in China and full integration into Meituan Diaping’s app. The developments, its first since its acquisition by Meituan for $2.7 billion in April, are meant to help Mobike become a stronger competitor against Ofo, its biggest rival, and a slew of smaller startups in China’s heated bikesharing wars.

Mobike, which claims 200 million users, will have the chance to reach more customers thanks to its integration into Meituan’s platform. Meituan has ambitious growth plans (filed for an IPO in Hong Kong last month) and describes itself as a “one-stop super app” because of the large range of services, including dining, salon, entertainment and travel bookings, it offers. Meituan’s 310 million users were already able to pay for Mobike on the platform and will now also be able to rent a bike through the app.

Mobike also upped the ante for competitors by announcing that it will stop requiring users in China to pay 299 RMB (about $45) deposits and will refund all deposits already paid. Mobike says it is getting rid of deposits to “establish a no-threshold, zero-burden and zero-condition deposit-free standard for the entire bikesharing industry.” (Since the new policy only applies to users in China, instead of all 200 million Mobike users, TechCrunch has contacted the company for more information about how much money it is refunding).

Deposits are a contentious issue among bikesharing users. Though Mobike and Ofo claim they do not use customer deposits to fund operations, some bikesharing startups have been accused of spending deposits on operational expenses, with users complaining that it is very difficult to get their money back, even if they stop using a service or it goes out of business. The issue has resulted in Chinese lawmakers drafting regulations that require bikesharing companies to store deposits in a separate bank account so the funds are still available to return to customers even if a company goes out of business.

Another controversial issue is the large number of trashed or abandoned bikes created by bikesharing companies, with photos of “bikesharing graveyards” becoming symbolic of the sector’s excesses and unsustainable growth. To address environmental concerns, Mobike says it is launching a bike components recycling program in partnership with several companies, including Dow, China Recycling Resources and Tianjin Xinneng Recycling Resources. Called Mobike Life Cycle, the program will recycle bike components into new parts or raw materials. Mobike says it has already recycled and reused over 300,000 Mobike tires.

Mobike will also add a new e-bike that can reach a top speed of 20 km/hour and travel up to 70 km on a single charge. The company hopes that the e-bike, which will be available in China and Mobike’s international markets, will increase trip lengths. In its press statement, Mobike says most of its bikes are used for trips up to 3 km, but the e-bikes will hopefully increase that to 5 km.

This Pistol Attachment Reduces Bullet Speed And Makes It Non-Lethal

GizmoCrazed - September 14, 2015 0
Hollywood films seem to have changed our perception about the way local police approaches crime. You would not usually see a local police officer...

Bose's AR sunglasses use sound, not a screen to augment reality