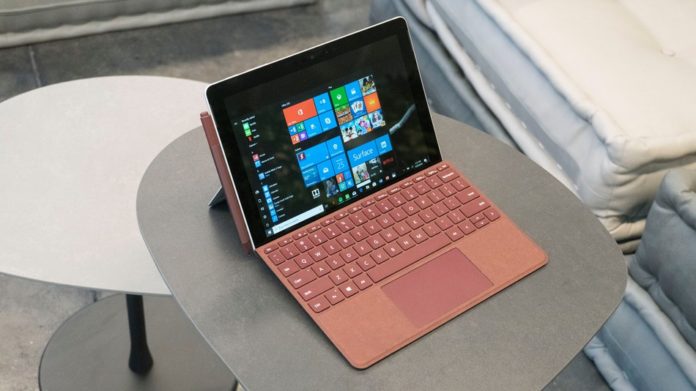 Your eyes aren’t playing tricks on you. Microsoft’s new Surface Go really is a shrunken version of its popular Surface Pro.

The 10-inch Surface Go is Microsoft’s smallest, thinnest, and lightest Surface tablet to date. And with a starting price of $399, the Go is also the cheapest Surface as well.

A Surface RT (remember that disastrous tablet?) the Go is not. This mini Surface runs Windows 10 in its entirety and all x86 apps.

My first thought after a Microsoft executive pulled the Go out of her purse wasn’t, “Oh, that’s really small” but “Why?” Why would anyone need a mini Surface Pro? And it really is a smaller version of the 2-in-1 — hinge, keyboard cover, stylus, and all.

Microsoft didn’t really answer my question. I was told many Surface device users (Pro, Laptop, Book, etc.) used their devices primarily for work and they wanted something personal that would still work with all of their existing Surface work accessories, (i.e. dock and magnetic charger) and could easily be carried around.

I was also told there was a huge price range to fulfill — the $500-and-under premium tablet category, which is dominated by the iPad. This makes a lot more sense. Apple’s increasingly adding more productivity-friendly features to the iPad (the $329 iPad got Apple Pencil support this year), and the iPad Pro with Smart Keyboard, running iOS 11, has made doing work on the machine more realistic.

With the iPads encroaching on Surface Pro territory, it’s only logical to fight them head-on with the similarly-priced Surface Go, which arguably does more with Windows 10.

Much like how new iPads are unmistakably iPads, the Surface Go is unmistakably a Surface. It’s smaller — only 8.3mm (0.33 inch) thick and 1.15 pounds — and the corners and edges are rounder and softer, but the build quality is still top-notch. 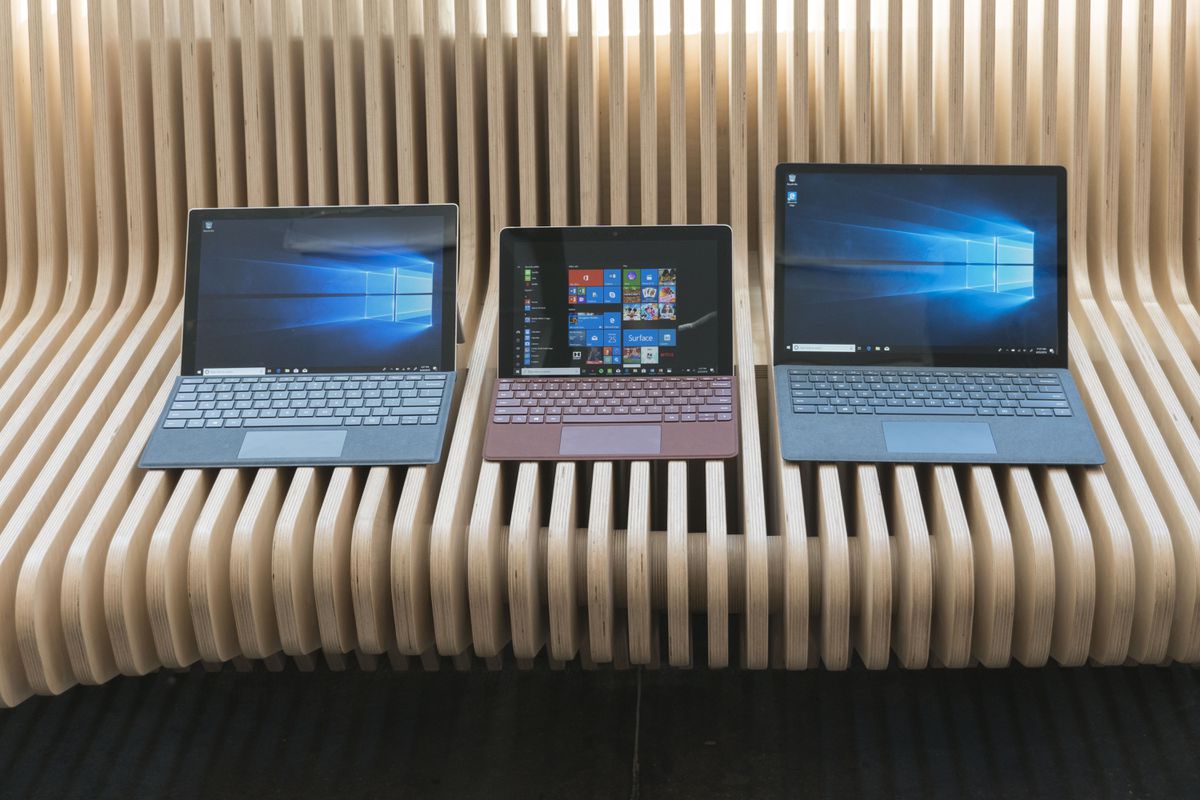 Look at how small the Surface Go (center) is compared to the Surface Pro (left) and Surface Laptop (right).

The body’s still the same smooth and sturdy magnesium alloy as the Surface Pro. The screen is the same 3:2 aspect ratio as well. The 10-inch PixelSense Display’s got fewer pixels (1,800 x 1,200) than the Pro, but it still looks sharp and supports multi-touch with up to 10 fingers. The bezels are a little thick for a modern tablet, but on the plus side, there are two front-firing speakers built into them. 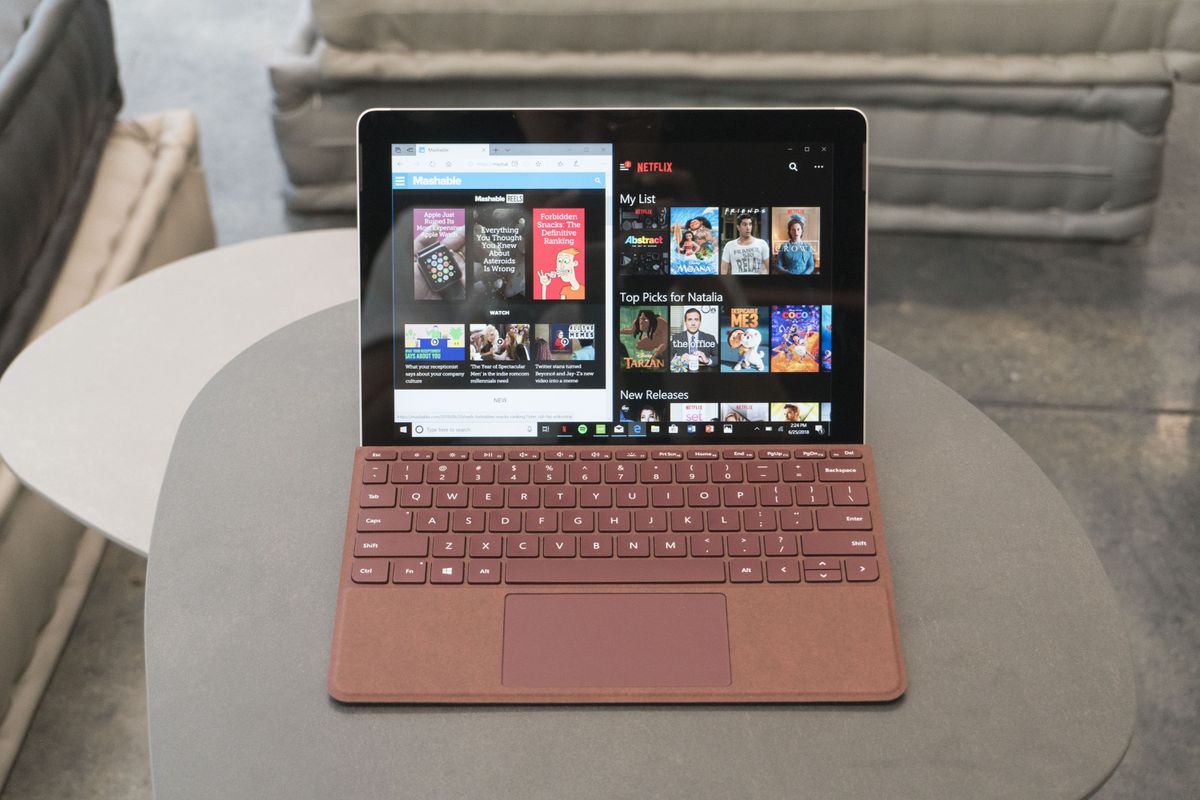 The 10-inch screen is small, but it can still open two apps side-by-side.

Like the Surface Pro, the Go has an excellent kickstand. It doesn’t click into place at certain angles, though. Instead, it’s just one smooth tilt as far back as 165 degrees. From what I could tell, it’s very well-built.

The Go’s port selection is a bit limited, though. There are just three on the right side: the magnetic Surface port, one USB-C 3.1 port, and a headphone jack. A microSD card slot is hidden underneath the hinge. 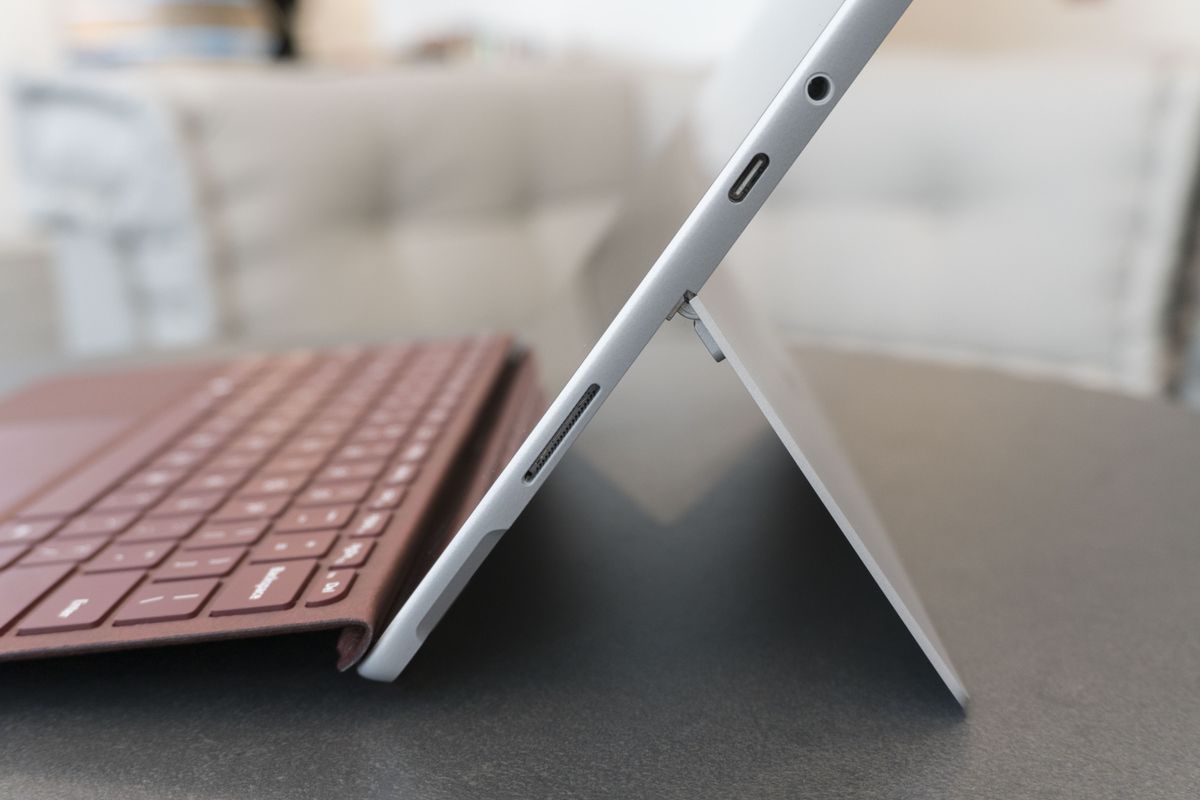 You get a Surface port, one USB-C, a headphone jack, and a microSD card slot (behind hinge). 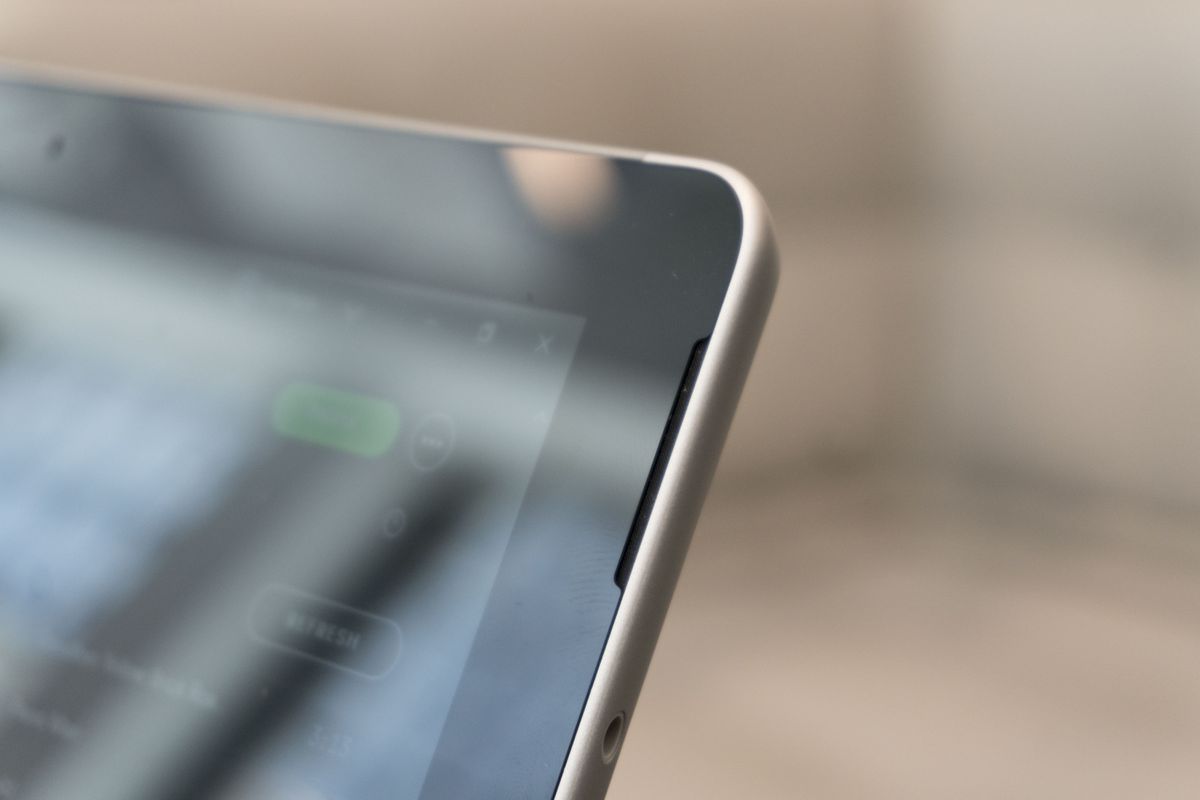 On the front is a 5-megapixel HD camera and on the back is an 8-megapixel shooter. The cameras are okay — you’re not really gonna be taking selfies or Instagram photos with them — and are more  for Skype calls and scanning documents than serious photography. So they should be more than adequate. Oh, and the Surface Go supports Windows Hello face log-in. 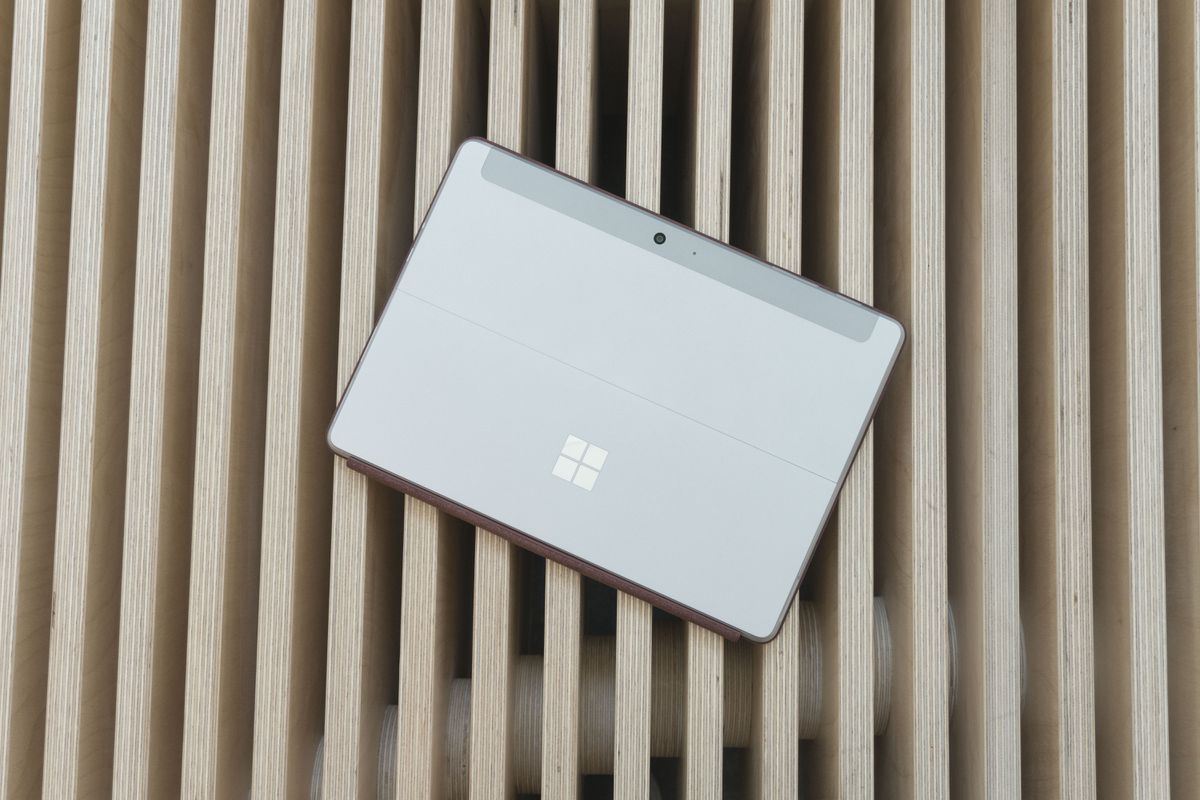 On the back’s a 8-megapixel camera.

So that’s a rundown of the Go’s external hardware. But what about its guts? What corners did Microsoft have to cut in order to get the Go down to a $399 starting price?

For starters, the processor’s not as beefy as the Surface Pro’s. The Go comes with seventh-generation Intel Pentium Gold 4415Y processor (yeah, Pentium chips still exist) and Intel HD Graphics 615. These chips, I’m told, are just a step below Intel’s Core M chips. The Go’s also fanless, which means it runs silent. 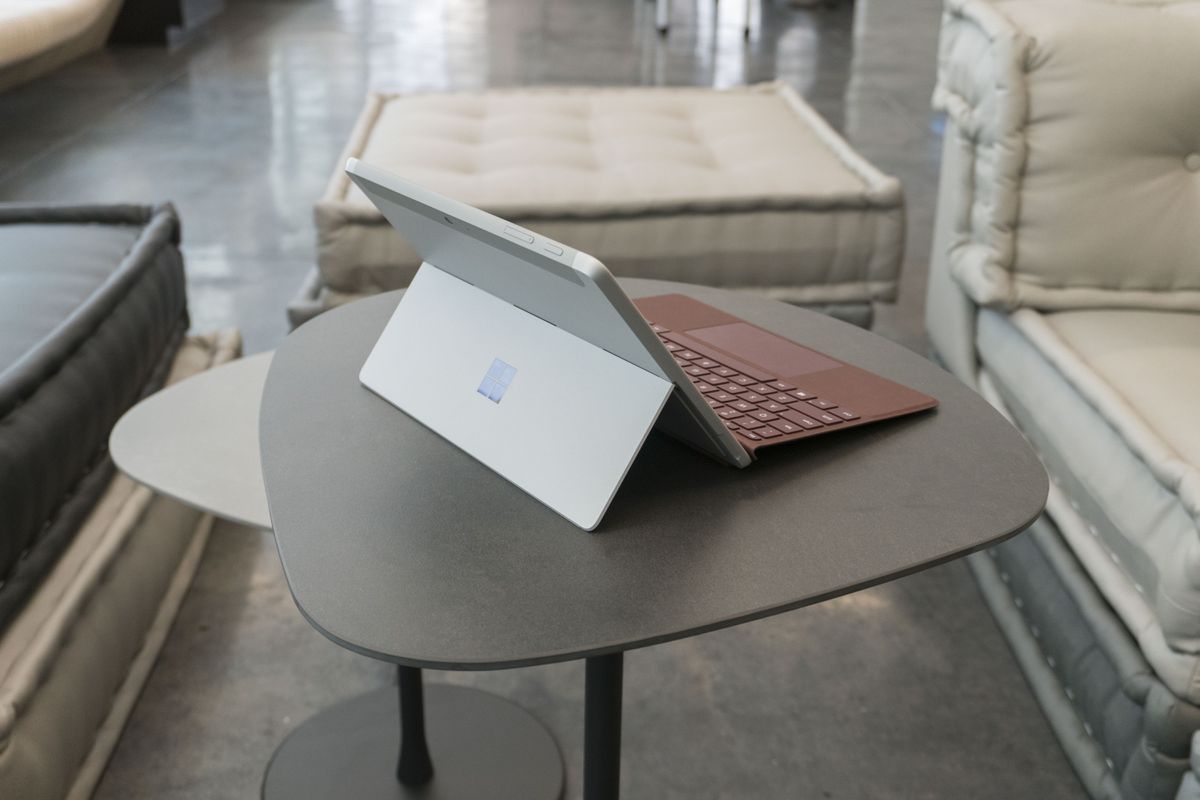 The kickstand tilts back up to 165 degrees. 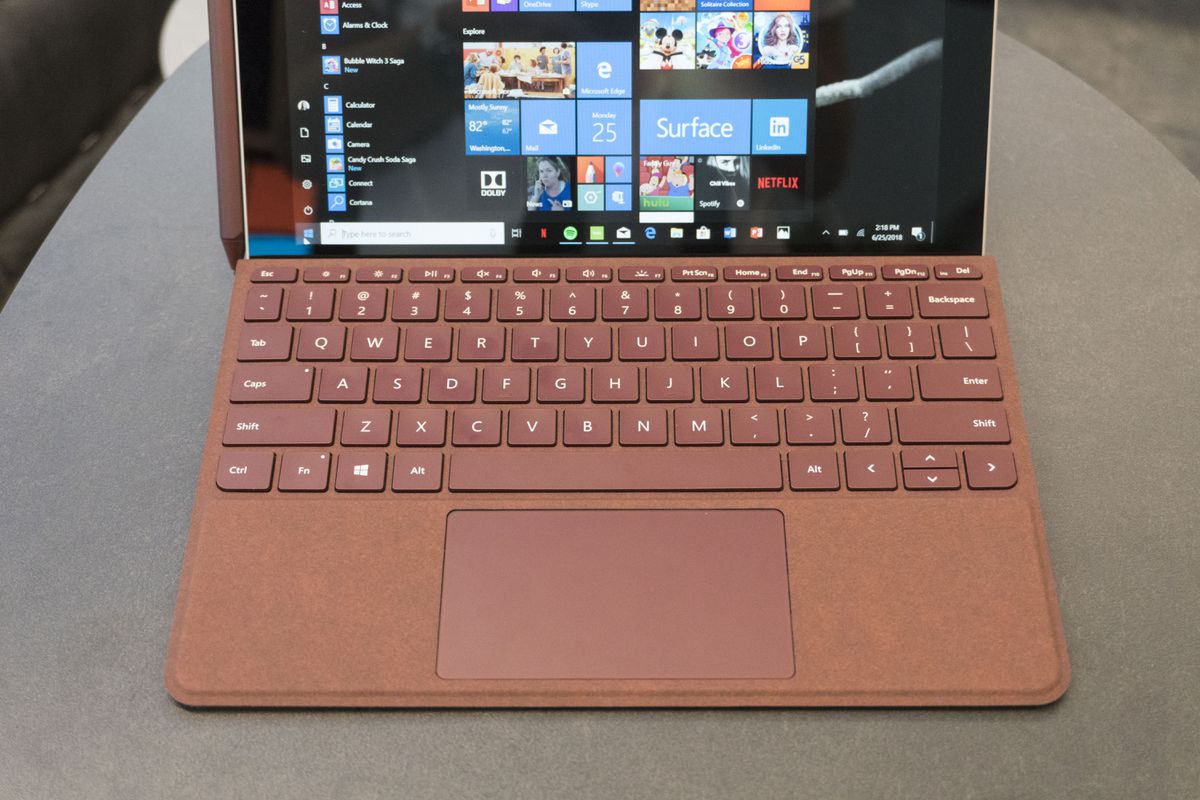 The $100 keyboard has the same felt-like Alcantara material as the Surface Pro’s.

As with the Surface Pro, the Go supports its own Microsoft Type Cover keyboard and all existing Surface Pens.

These two essential accessories (at least, I consider them to be) are sold separately. $100 for the keyboard and $100 for the stylus.

That means the cost of a Surface Go is really +$100-200. I grilled Microsoft on why they didn’t bundle the keyboard together and got your typical canned response: They want to give people choice.

I just don’t understand why companies keep doing this — like the Surface Pro, the Go is clearly designed to work best with a keyboard cover. So why not bundle them together to make the device truly irresistible? 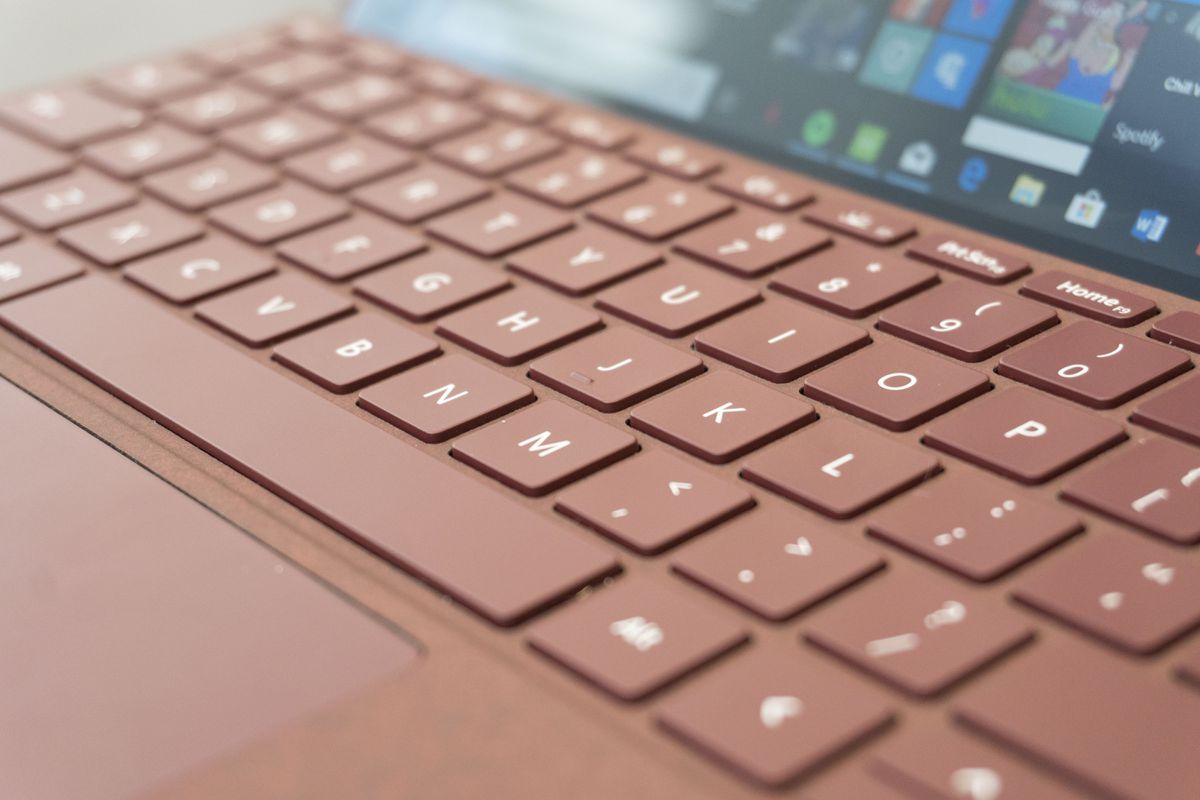 The keyboard is a joy to type on. 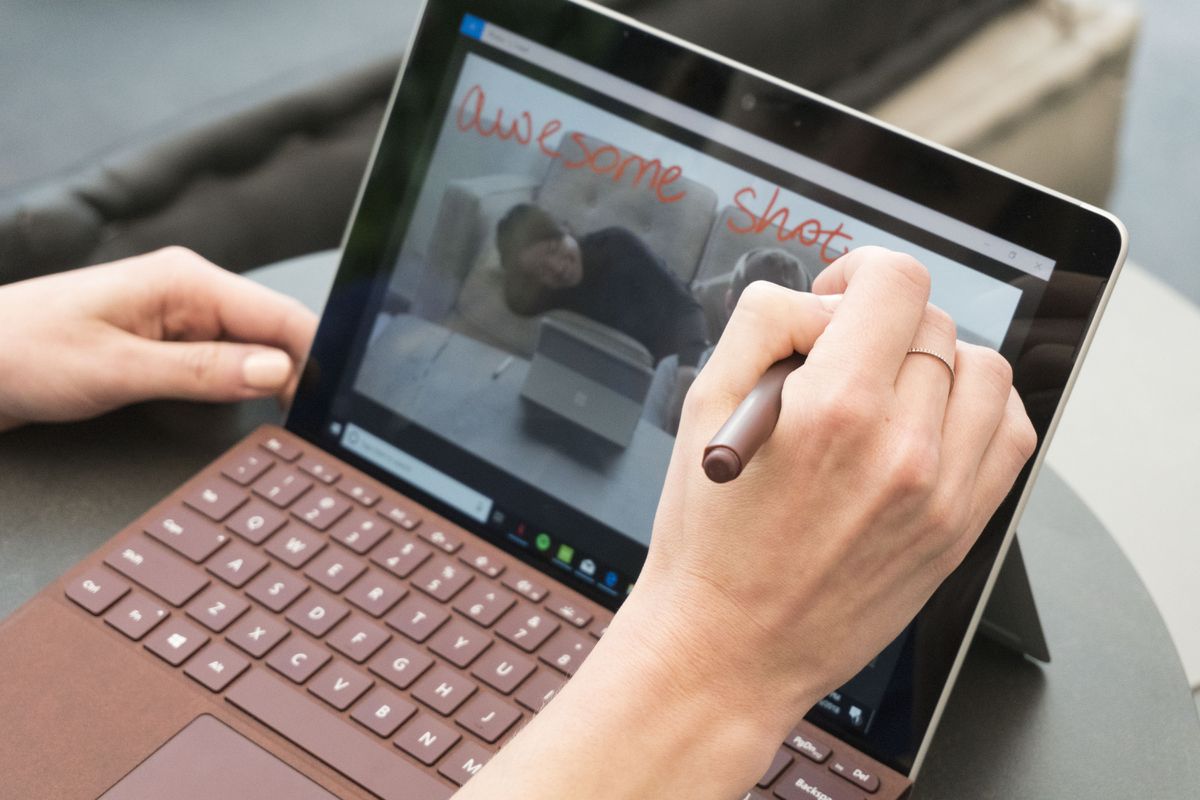 The touchscreen is every bit as responsive as the Surface Pro’s.

Both of these accessories are precision-made and work to the caliber you’d expect from Microsoft. The keyboard has keys with great travel, unlike the ultra-flat ones on Apple’s MacBooks. And the trackpad is very responsive.

All hail the iPad killer? 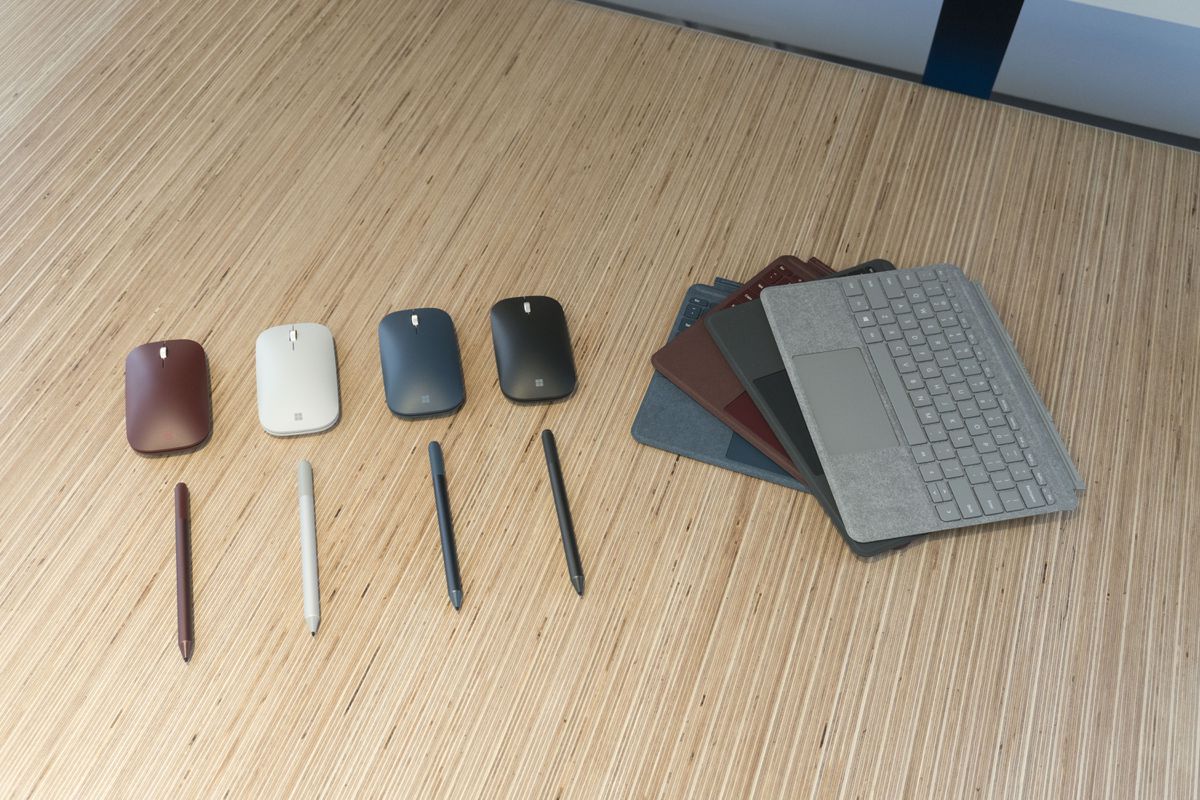 Microsoft’s also got a $40 new wireless mouse and Touch Cover Keyboards in a number of colors.

It’s hard to say if Microsoft’s Surface Go is better or worse than an iPad or iPad Pro. Can the Intel Pentium Gold processor keep up with the demands of Windows 10? (Note: The Go ships with Windows 10 in S Mode, but you can switch it to Windows 10 Pro with a one-way setting.) Will the battery life hold up?

There are a lot of unanswered questions that will only be answered once we’ve tested the Go. But, first impressions: I liked what I saw.

The Surface Go will be available on Aug. 2 from Microsoft and select retailers. Microsoft’s also going to sell an LTE version for an $130 extra later this year. 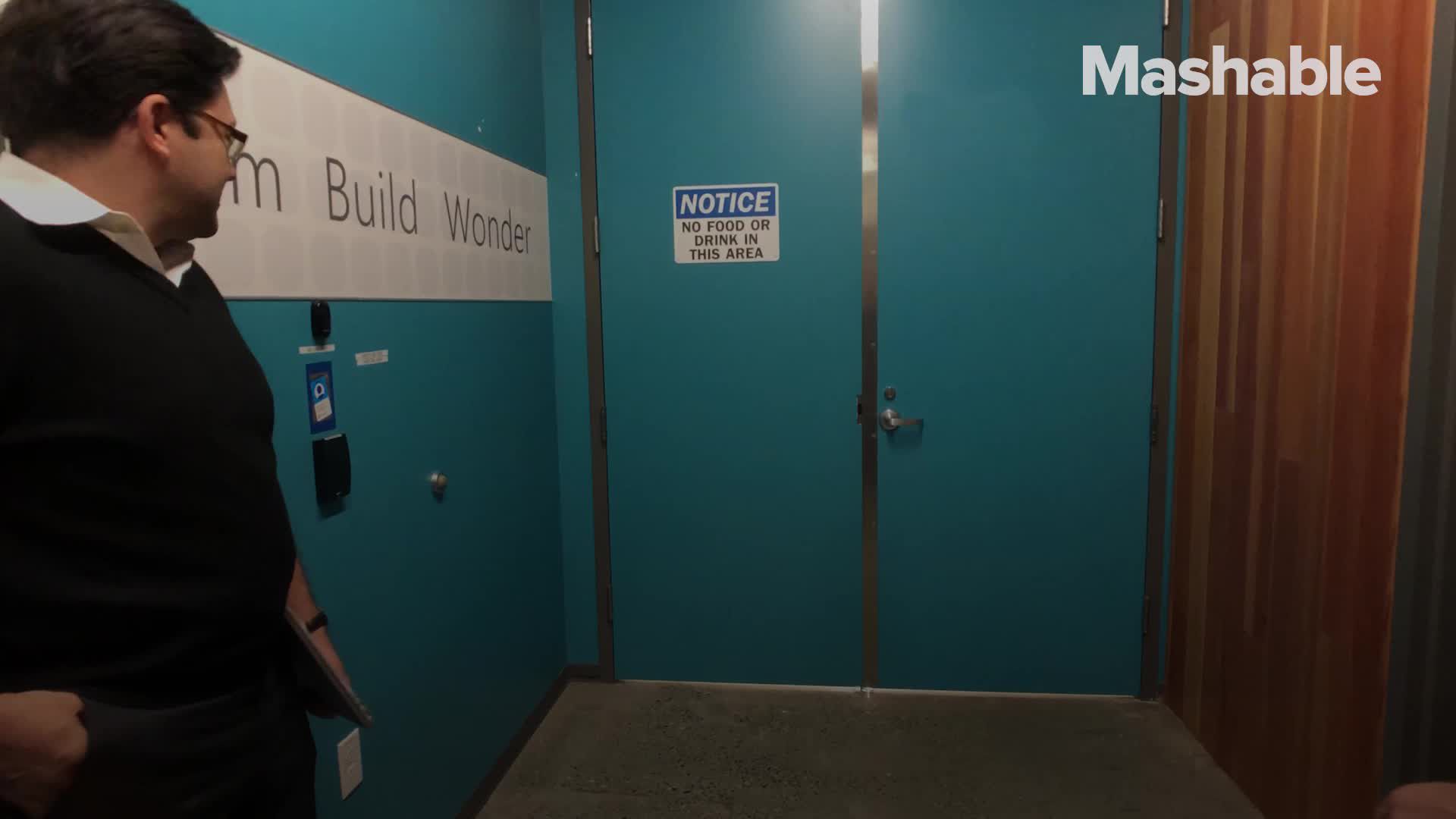