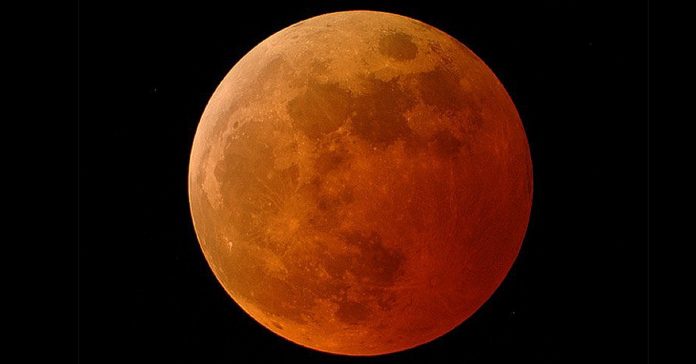 On Friday, Earth will engulf the moon in its shadow and create the longest total lunar eclipse in this century: a full 103 minutes. The next one that comes close won’t happen until 2029. And today’s running time won’t be matched until 2123.

In a nice little cosmic reminder that nobody is the center of the universe, this eclipse will be visible from every continent on earth except North America. If you want the best view and can’t catch a flight to Eastern Africa, India, or Southeast Asia—ideal viewing locations, according to NASA—you’ll have to live-stream the eclipse instead.

The Slooh community observatory, a telescope service for the public, will start airing the eclipse around 1:00 pm EDT. The eclipse will begin at 1:14 pm EDT and will end at 7:28 pm EDT.

Slooh estimates that this time around, tens of thousands of people—many of whom probably watched the 76-minute total lunar eclipse back in January—will tune in online. No one wants to miss the astronomical event’s best side effect: the moon transforming from its year-long milky hue to a stunning red-orange-y blush, a phenomenon often referred to as a blood moon. Turns out, though, the striking color actually comes from Earth.

“When the moon’s within the Earth’s shadow, the only light it receives is the scattered light from the Earth’s atmosphere, which is a reddish color,” says Noah Petro, a research scientist at NASA’s Goddard Space Flight Center. Earth’s atmosphere is more likely to scatter blue light particles, which is why we get such jaw-dropping sunsets. For the same reason, red and orange particles are more likely to make it to the face of the moon during an eclipse.

“Blood moon” is more of a nickname than an established astronomical term, says Paige Godfrey, a physicist at Slooh (the same goes for “blue moon” and “supermoon”). In recent years, certain Christian ministers of the more doomsday-prophesying variety have taken up the phrase “blood moon” to warn people about the impending apocalypse. John Hagee, a televangelist and pastor of a prominent Texas megachurch, proposed in his 2013 book Four Blood Moons that the coinciding of two Jewish holidays, Passover and Sukkot, and total lunar eclipses in April and October in both 2014 and 2015 amounted to a message from God. While Hagee hasn’t trotted out his theories recently, Friday’s impending blood moon has reignited similarly creative online sermons and internet conspiracies.

Astronomers are excited about this eclipse’s extended duration. It’s all about how closely the moon aligns with Earth and the sun. The more perfectly the three celestial bodies line up, the longer the moon will be in Earth’s shadow, Petro says. One of the longest eclipses lasted an estimated 107 minutes, but that was back when the most exciting news of the day was Constantine the Great renaming an ancient Roman town after his mother (in 318). The last extra-long eclipse was on July 16, 2000, and lasted 106 minutes. Friday’s eclipse will still leave our millennium (which started in 2001) in third place at best.

In preparation for Friday afternoon, NASA will be temporarily shutting down most of the Lunar Reconnaissance Orbiter, the solar-powered satellite that’s been studying the moon for almost a decade. It will be longest it’s ever gone without sunlight, so NASA will be carefully regulating the spacecraft to make sure it doesn’t run out of battery. The space organization took similar precautions during January’s comparatively measly 76-minute light show.

Total lunar eclipses still happen about twice a year (and sometimes more often), but they won’t be around forever. The moon is gradually—very gradually—moving farther and farther away from Earth. “Theoretically, at some point, there will be a last eclipse, where the moon just precisely fits within the Earth’s shadow, lasts a short period of time, and that would be it,” Petro says.

If you don’t have the patience for this Friday’s sky show, catch the next one in January IRL, which will be visible throughout the US. Don’t worry, it will only be 62 minutes.

GizmoCrazed - January 5, 2018 0
Oh, the poor humanoid robots. After decades of development, they're still less sprinty Terminator and more … octogenarian on sedatives. While these robots may...

The Popularity Of Prepaid Phone Service

Silicon Valley's Breakthrough Prizes Have Money, but They Need Diversity Too