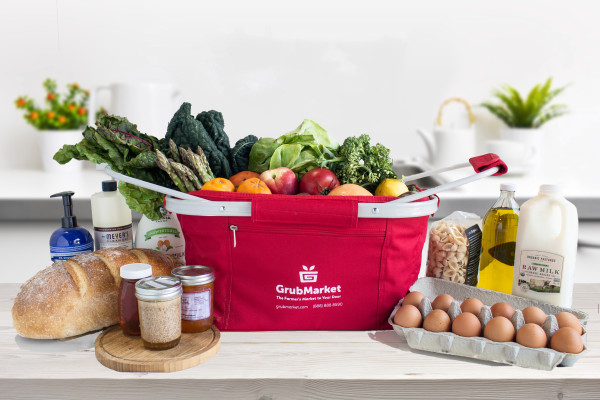 As consumers become more discerning about the food they eat, a wave of startups has emerged that is catering to that demand with convenient alternatives to the more ubiquitous options that are available today. One of these, GrubMarket — which sources organic and healthy food directly from producers and then delivers it to other businesses (Whole Foods is a customer) as well as consumers at a discount of 20-60 percent over other channels — is today announcing a $32 million round to grow its already profitable business, including making acquisitions and expanding on its own steam as it eyes a public listing.

“We are looking to buy companies to make more revenues ahead of an upcoming IPO,” said Mike Xu, the founder and CEO. He said GrubMarket is “in proactive steps” to expand from its home base in California to the East Coast, starting in New York and New Jersey, by October this year. The plan, he said, will be to file with the SEC sometime between the end of this year and early 2019, with the IPO taking place in the second half of 2019.

E-commerce, and in particular food-related businesses with perishable items and associated waste, can be tricky when it comes to margins, and indeed, there have been many casualties in the world of food startups. Xu said in an interview that GrubMarket is already profitable and working at a $100 million run rate.

One of the reasons it’s profitable may also be the same reason you may have never heard of GrubMarket. Currently, between 60 and 70 percent of its business is in the B2B space. Xu says that customers number in the thousands and include offices, grocery stores and restaurants across the San Francisco Bay Area, Los Angeles, Orange County and San Diego.

And so, if you don’t know GrubMarket, you might know some of its customers, which include all WeWorks between San Diego and San Francisco, Whole Foods, Blue Apron, Hello Fresh and Chipotle. GrubMarket has also cornered some very specific niches: It has become the biggest mushroom supplier in all of Northern California, and it’s the biggest supplier of Hawaiian farm produce in the Bay Area.

Another point in the company’s favor is the technology it uses. Working directly with farmers and other producers, GrubMarket has built apps that allow it and its partners to manage the logistics of the business in an efficient way. The idea will be to bring more AI to the platform over time: for example, to be able to run better modelling to figure out how much fruit and veg might sell during a given season, and how to price items.

GrubMarket also is dabbling in areas that you might not normally associate with a grocery-on-demand delivery company: it built an educational app called Farmbox, which — when you play it — can be used to collect points to spend on GrubMarket; and it’s also exploring how blockchain technology can be used in a “next-generation open platform for direct farm-to-table.”

Xu says that as the company continues to grow, it will shift more into direct-to-consumer deliveries to complement its wholesale business.

This latest round is a mixture of equity and debt and is being led by GGV with other previous investors Fusion Fund (formerly New Gen Capital) and Great Oaks Venture Capital participating, along with new investors Max Ventures, Castor Ventures, Bascom Ventures, Millennium Technology Value Partner, Trinity Capital Investment, Investwide Capital and others. The company is not publicly disclosing its valuation; it has raised around $64 million to date.

Many eyes are on Amazon these days, and what moves it might make next in groceries after acquiring Whole Foods, ramping up its own Pantry offerings, courting restaurants for delivery and making its own meal kits. This is not a question that keeps up Xu at night, however.

“Food is the largest and biggest opportunity in e-commerce,” he said, estimating that today the total value for the global food and agricultural industry is around $9 trillion (versus $8 trillion in 2017), with only about one percent of buying done online. “That’s a big enough opportunity to have a few giant companies, and not just Amazon.”

It’s also an opportunity that could sustain some slightly smaller companies, too: One of my favorite e-commerce businesses in England is a service that I’ve been using for years, an organic grocery delivery called Abel & Cole that brings us a box of organic fruit and vegetables (and whatever else I order on top of that) each week. Like GrubMarket, it’s working directly with smaller producers who might have otherwise found it hard-going to find a way of selling their produce directly to buyers (and buyers would have found it hard-going to ever buy directly from these producers). Unlike GrubMarket, it takes a more modest approach that doesn’t involve eventually becoming a leviathan itself. May they all be around for years to come.

How A Good Gut Bacteria Became A Vicious Pathogen

GizmoCrazed - April 12, 2019 0
(Credit: Santypan/Shutterstock) In 1984, bacteria started showing up in patients’ blood at the University of Wisconsin Hospital and Clinic. Bacteria do not belong in the...

To Clean Up Space Junk, Some People Grabbed a Net and...