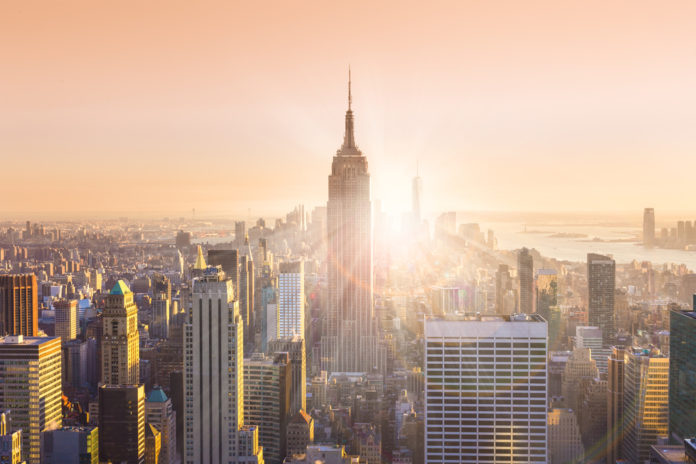 How many windows are there in New York City?

However you answer this classic interview day curveball, imagine if we devised a way to use each of those windows to convert the sun’s rays into electricity. Whoa.

William Rankine, a noted 19th century Scottish mechanical engineer, would call that an idea with a lot of potential.

While we (most likely) will never turn every window in NYC into a solar cell, it won’t be because we never tried. Case in point: Researchers from China designed a specialized film that, when applied to the inside of a window, generates electricity from the sun while also reflecting infrared rays to keep the inside of a building cool. It’s an important step if city skylines are to someday double as solar power plants.

Early attempts to embed photovoltaic films in windows produced a reddish tint that architects find hard to work with. Newer technology is far clearer, but sometimes produces excess heat. What’s the point in generating electricity if all of the new capacity is used to cool the building? By engineering a film that can perform two functions — generating electricity and keeping things cool — the research team proved that solar-cell windows could both harvest energy and save it simultaneously.

Their photovoltaic window film achieved a 6 percent power conversion efficiency rate — newer solar panels can reach a rate of 22 percent.  The number may be lower, but the technology could turn an untapped resource — skyscraper windows — into a power source. Solar cell – infused glass could even be worked into smartphone screens to keep our devices running longer. Researchers published their findings recently in the journal Joule.

To a renewable energy baron, knotty infrastructure and glass monoliths in a major city present an opportunity not unlike the crude oil spewing from the Lucas gusher at Spindletop in 1901.

That was the gusher that kicked off the decades-long Texas oil boom, and if you were a petroleum baron at Spindletop that day, you knew there was an untapped expanse oozing with fortunes. Today, it’s cities that are oozing with renewable energy potential, and we’re only beginning to tap into it.

Take the water flowing through pipes beneath the streets. Cities spend ample time and treasure ensuring water reaches a person’s faucet, but while our water is in transit it doesn’t really do much along the way. Our water could work harder.

Case in point: In 2015, the city of Portland partnered with a company called Lucid Energy to install power-generating turbines in the city’s gravity-fed water pipes. Like a mini hydroelectric plant, water flowing in the pipes spins turbines that generate power. Fifty feet of of these “LucidPipes” can generate 1,100 megawatt-hours of electricity every year (enough to power 150 homes), which is then sold back to Portland General Electric.

Cities also produce a lot of excrement, which, like the water, could work harder for us. In Grand Junction, Colorado, residents’ poo works harder than most. There, the Persigo Wastewater Treatment Plant is converting 8 million gallons of human waste into renewable natural gas to power 40 of the city’s heavy-duty vehicles.

The Strata in London is a skyscraper that features built-in wind turbines. We can build functional roadways that include rugged solar cells. Mini wind turbines and solar panels fit nicely on myriad rooftops.

Windows that double as solar cells would be just another role-player in what’s turning into the 21st century urban energy boom.

Have the Blurred Lines of PlayStation and Xbox Finally Ended the...

GizmoCrazed - May 14, 2020 0
Have the Blurred Lines of PlayStation and Xbox Finally Ended the Console Wars? Source: Pixabay Growing technology in recent years has led to a change in...