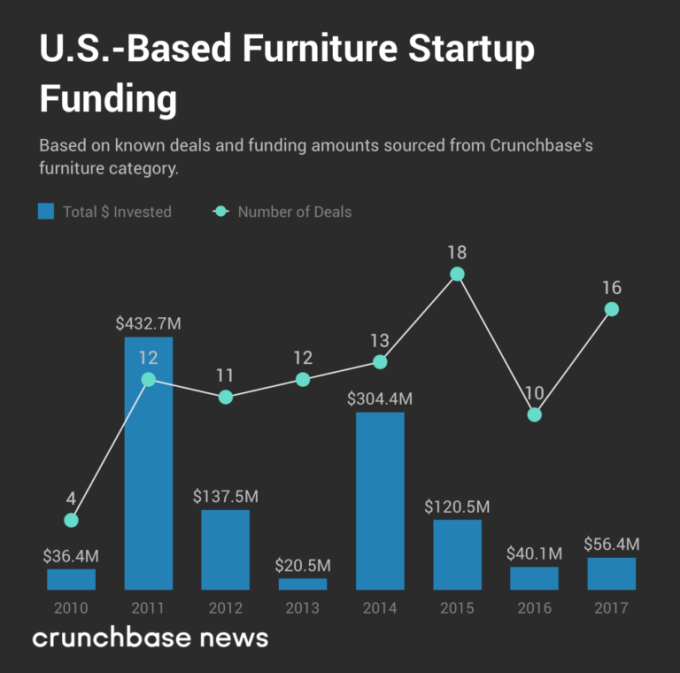 Startups making delivery and transport easier than ever are a hit with venture capitalists, so it’s not a surprise that young tech companies delivering home staples — living room sets, dining room tables, couches and more — are raising big dollars.

From 2010 through 2017, venture investors have outfitted U.S.-based furniture startups with a little over $1.1 billion in funding across 96 known rounds. But that funding has not been spread equally over time, as the following chart shows:

Total dollars funneled into U.S.-based furniture startups, according to Crunchbase, hit an all-time high of $432.7 million across 12 rounds in 2011. Wayfair, an e-commerce site dedicated to selling furniture, raised a significant $165 million Series A that year, accounting for more than a third of the total deal volume.

But while funding hasn’t surpassed 2011 levels, from that year through 2015, round counts steadily climbed. During this period, investments into seed and early-stage startups made up more than 70 percent of known deals.

Whether or not this cohort of seed and early-stage startups will act as fodder for late-stage investors is not yet clear. Before that happens, Stephen Kuhl thinks that there’s more work to be done.

Kuhl, the CEO of Burrow, a company that sells furniture over the internet, told Crunchbase News that “selling traditional furniture made in China or Mexico isn’t innovative, and as such we wouldn’t expect to see a lot of venture funding.” But that doesn’t mean that venture interest in the sector is doomed. Kuhl added that “a new company has to offer a unique product, experience and brand that is altogether [10 times] better than traditional offerings. Expect the money to follow the new brands that truly shake up the status quo.”

That may bear out. The funding data we examined tells one particular story: venture money has shown a preference for delivery and a consumer that doesn’t easily call the place they live in “home.”

For city dwellers, modular, utilitarian couches are taking hold. And it’s increasingly clear you don’t have to leave your couch to purchase one.

Let’s return to Burrow, which has raised a total of $19.2 million, according to Crunchbase. The startup has created a modular couch built for those who live in dense urban environments and may move often.

“Our customers are reflective of larger trends in the market. They’re more likely to be renters rather than homeowners,” Kuhl explained. “They’re likely to move multiple times over the course of a few years, and they crave thoughtful, high-quality goods.”

To account for this new type of customer, Burrow delivers each section of the couch in distinct packages. Burrow claims on its website that its direct to consumer business model and its ability to ship parts of couches, rather than one whole couch, removes “over 70 [percent] of standard shipping costs.” The couch also includes modern amenities such as a USB charger, and Burrow has also “launched an AR app that helps customers visualize a Burrow in their home,” according to Kuhl.

However, Burrow isn’t completely eschewing the showroom as part of its selling strategy. In a podcast interview with TotalRetail, Kuhl noted that the startup has “partner showrooms” in co-working spaces and other retail locations in more than 20 cities.

Of course, while modular design is helpful for city dwellers, there are those who enjoy a bit more of a personal twist. Interior Define, a Chicago-based startup, has raised $27.2 million to offer direct to consumer couches and dining room sets. And, according to Interior Define’s founder Rob Royer, its appeal is being driven by a new breed of consumers who are interested in brands that have “an authentic mission, deliver on a promised experience, and offer a real value proposition (not just a lower price).”

That said, both of these options still require that the furniture be owned — an unnecessary burden if you move often or just like fresh looks without the commitment. Through Feather, customers can subscribe to a whole living room, bedroom or dining room for as low as $35 a month. According to Crunchbase, the New York-based startup has raised $3.5 million from established venture firms such as Y Combinator and Kleiner Perkins.

There are also startups looking to simply help brands sell more furniture by using artificial intelligence and augmented reality. One such startup, Grokstyle, has raised $2.5 million for an app that identifies furniture by image as well as style and pricing preferences.

In general, streets, kitchens and even front doors are being claimed by venture-backed startups. What you sit on might as well be paid for, in part, by venture capitalists, too.

GizmoCrazed - March 30, 2018 0
No one knows exactly when or where China's abandoned Tiangong-1 space station will return to Earth. But the map on Ted Muelhaupt's computer gives...

These Researchers Think We Can Retrain Our Brains to Tame Chronic...

Forget the Moon—We Should Go to Jupiter’s Idyllic Europa