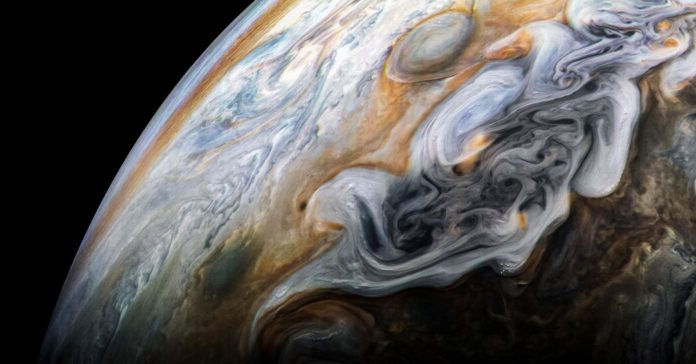 Turbulence, the splintering of smooth streams of fluid into chaotic vortices, doesn’t just make for bumpy plane rides. It also throws a wrench into the very mathematics used to describe atmospheres, oceans and plumbing. Turbulence is the reason why the Navier-Stokes equations—the laws that govern fluid flow—are so famously hard that whoever proves whether or not they always work will win a million dollars from the Clay Mathematics Institute.

But turbulence’s unreliability is, in its own way, reliable. Turbulence almost always steals energy from larger flows and channels it into smaller eddies. These eddies then transfer their energy into even smaller structures, and so on down. If you switch off the ceiling fan in a closed room, the air will soon fall still, as large gusts dissolve into smaller and smaller eddies that then vanish entirely into the thickness of the air.

But when you flatten reality down to two dimensions, eddies join forces instead of dissipating. In a curious effect called an inverse cascade, which the theoretical physicist Robert Kraichnan first fished out of the Navier-Stokes equations in the 1960s, turbulence in a flattened fluid passes energy up to bigger scales, not down to smaller ones. Eventually, these two-dimensional systems organize themselves into large, stable flows like vortexes or river-like jets. These flows, rather like vampires, support themselves by sucking away energy from turbulence, instead of the other way around.

While the inverse cascade effect has been known for decades, a mathematical, quantitative prediction of what that final, stable flow looks like has eluded theorists. But a glimmer of hope came in 2014, when Jason Laurie, now at Aston University in the United Kingdom, and his colleagues published a full description of the flow’s shape and speed under strict, specific conditions. Since then, new simulations, lab experiments and theoretical calculations published as recently as last month have both justified the team’s calculations and explored different cases where their prediction starts to break down.

All this might seem like only a thought experiment. The universe is not flat. But geophysicists and planetary scientists have long suspected that real oceans and atmospheres often behave like flat systems, making the intricacies of two-dimensional turbulence surprisingly relevant to real problems.

After all, on Earth, and especially on the gas giant planets like Jupiter and Saturn, weather is confined to thin, flattish slabs of atmosphere. Large patterns like hurricanes or the Gulf Stream — and Jupiter’s huge horizontal cloud bands and Great Red Spot—might all be feeding on energy from smaller scales. In the last few years, researchers analyzing winds both on Earth and on other planets have detected signatures of energy flowing to larger scales, the telltale sign of two-dimensional turbulence. They’ve begun mapping the conditions under which that behavior seems to stop or start.

The hope, for a small but dedicated community of researchers, is to use the quirky but simpler world of two-dimensional fluids as a fresh entry point into processes that have otherwise proved impenetrably messy. “They can actually make progress” in two dimensions, said Brad Marston, a physicist at Brown University, “which is more than what we can say for most of our turbulence work.”

Up in the Air

On Sept. 14, 2003, the National Oceanic and Atmospheric Administration sent an aircraft into Isabel, a Category 5 hurricane bearing down on the Atlantic Coast with winds gusting to 203 knots—the strongest readings ever observed in the Atlantic.

NOAA wanted to get readings of turbulence at the bottom of a hurricane, crucial data for improving hurricane forecasts. This was the first—and last—time a crewed aircraft ever tried. At its lowest, the flight skimmed just 60 meters above the churning ocean. Eventually salt spray clogged up one of the plane’s four engines, and the pilots lost an engine in the middle of the storm. The mission succeeded, but it was so harrowing that afterward, NOAA banned low-level flights like this entirely.

About a decade later, David Byrne got interested in these data. Byrne, a physicist at the Swiss Federal Institute of Technology Zurich, had previously studied turbulent energy transfer in lab experiments. He wanted to see if he could catch the process in nature. He contacted Jun Zhang, an NOAA scientist who had been booked on the very next flight into Isabel (a flight that never took off). By analyzing the distribution of wind speeds, the two calculated the direction in which energy was traveling between large and small fluctuations.

Starting at about 150 meters above the ocean and leading up into the large flow of the hurricane itself, turbulence began to behave the way it does in two dimensions, the pair discovered. This could have been because wind shear forced eddies to stay in their respective thin horizontal layers instead of stretching vertically. Whatever the reason, though, the analysis showed that turbulent energy began flowing from smaller scales to larger scales, perhaps feeding Isabel from below.

Their work suggests that turbulence may offer hurricanes an extra source of fuel, perhaps explaining why some storms maintain strength even when conditions suggest they should weaken. Zhang now plans to use uncrewed flights and better sensors to help bolster that case. “If we can prove that, it would be really amazing,” he said.

On Jupiter, a much larger world with an even flatter atmosphere, researchers have also pinpointed where turbulence switches between two-dimensional and three-dimensional behavior.

Wind speed measurements taken by the Voyager probes, which flew past Jupiter in the 1970s, had already suggested that Jupiter’s large flows gain energy from smaller eddies. But in 2017, Peter Read, a physicist at the University of Oxford, and Roland Young, his postdoc at the time, made a wind speed map using data from the space probe Cassini, which swung past Jupiter in 2000 on its way to Saturn. They saw energy flowing into larger and larger eddies, the hallmark of two-dimensional turbulence.

But nothing about Jupiter is simple. On smaller scales—across patches of surface about the distance between New York and Los Angeles or less—energy dissipated instead, indicating that other processes must also be afoot. Then in March, the Juno spacecraft orbiting Jupiter found that the planet’s surface features extend deep into its atmosphere. The data suggest that not just fluid dynamics but magnetic fields sculpt the cloud bands.

For Freddy Bouchet, who studies turbulence at the École Normale Supérieure (ENS) in Lyon, France, this isn’t too discouraging, since the two-dimensional models can still help. “I don’t think anybody believes the analogy should be perfect,” he said.

At the end of 2017, Bouchet and Eric Woillez, also at ENS, sketched out their own theoretical account of how two-dimensional fluid flow can describe a rotating system such as the atmosphere of a planet.

Their work shows how flows built from smaller turbulence can match the enormous pattern of alternating bands visible on Jupiter through a backyard telescope. That “makes it really relevant for discussing real phenomena,” Bouchet said.

Bouchet’s work relies on considering the statistics of the large-scale flows, which exchange energy and other quantities in a balance with their environment. But there’s another path to predicting the form these flows will take, and it starts with those same obstreperous Navier-Stokes equations that lie at the root of fluid dynamics.

For two “totally fruitless” years at the beginning of this decade, Gregory Falkovich, a pen-and-paper theorist at Israel’s Weizmann Institute of Science, stared at those equations. He tried to write out how the flow of energy would balance between small turbulent eddies and a bigger flow feeding on them in a simple case: a flat, square box.

A single term, related to pressure, stood in the way of a solution. So Falkovich just dropped it. By discarding that troublesome term and assuming that the eddies in this system are too short-lived to interact with each other, Falkovich and his colleagues tamed the equations enough to solve the Navier-Stokes equations for this case. Then he tasked Jason Laurie, his postdoc at the time, with running numerical simulations that proved it. “It’s always nice when you have an exact result in turbulence,” Marston said. “Those are rare.”

In the team’s 2014 paper, they found a formula for how the velocity in the resulting large flow—a big vortex, in this situation—would change with distance from its own center. And since then, various teams have filled in the theoretical rationale to excuse Falkovich’s lucky shortcut.

Hoping for payoff in the pure math of fluids and for insight into geophysical processes, physicists have also pushed the formula outside a simple square box, trying to figure out where it stops working. Just switching from a square to a rectangle makes a dramatic difference, for example. In this case, turbulence feeds river-like flows called jets in which the formula starts to fail.

As of now, even the mathematics of the simplest case, the square box, isn’t totally settled. Falkovich’s formula describes the large stable vortex itself, but not the turbulent eddies that still flicker and fluctuate around it. If they vary enough, as they might in other situations, these fluctuations will overwhelm the stable flow. Just in May, though, two former members of Falkovich’s lab—Corentin Herbert, also at ENS, and Anna Frishman of Princeton University—published a paper describing the size of these fluctuations. “It teaches a little bit what the limitations of the approach are,” Herbert said.

But their hope, ultimately, is to describe a far richer reality. For Frishman, the pictures returned from Juno’s mission over Jupiter—showing a fantasyland of jets and tornadoes swirling like cream poured into the solar system’s largest coffee—are a driving influence. “If it’s something that I could help understand, that would be cool,” she said.

A Huge Achievement in Math Shows the Limits of Symmetries

GizmoCrazed - October 28, 2018 0
Success for Robert Zimmer is defined differently these days. As the president of the University of Chicago since 2006, he’s made headlines for landing...

Blood At A Crime Scene Can Reveal Age of Suspect or...

Startups Weekly: Will Trump ruin the unicorn IPOs of our dreams?