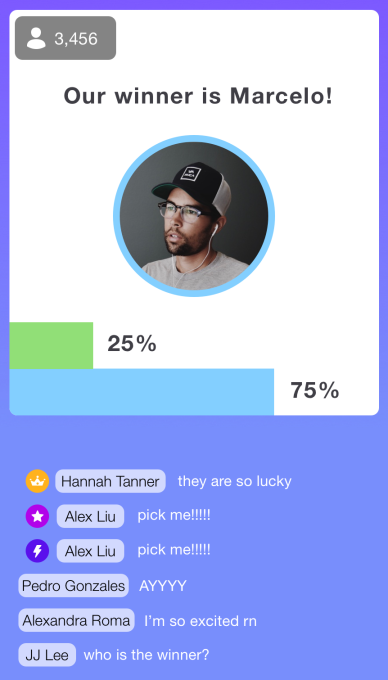 The pre-social media phenomenon that was early 2000s American Idol might be a weird place to spend a lot of focus when it comes to thinking about the future. But it’s also worth noting how little these types of shows adapted to build themselves into the fabric of live social commentary. Twitter has offered a nice second screen for thirsty users, but what would reality TV look like if it was built for the smartphone?

The team behind FameGame is aiming to answer these very fascinating/worrying questions with their new app which envisions the rebirth of live reality TV on your smartphone. The company’s first offering seems to be a mix of American Idol, Musical.ly and HQ Trivia with young users vying to flex their talents and social media prowess to win cash and glory.

The startup sees live gamified engagement as a social outlet that existing apps and platforms aren’t making much of a dent in. FameGame CEO Alexandra Botez grew interested in the concept after getting into live-streaming herself playing chess on Twitch and seeing the potential of bringing users closer to less gaming-focused verticals.

“We thought that the interactivity of live gaming could also be applied to make conventional TV more entertaining,” Botez tells TechCrunch. “We think Musical.ly and Instagram are pretty big so it’s hard for them to change their infrastructure in such a way that they make the type of immersive experience that we’ve created with FameGame.”

FameGame plays the game of fame by getting users to submit self-shot smartphone videos of their talents. The challenges differ by week but one contest may be focused on dance skills while another may be focused on lip-syncing. After an initial submission period, users can check out what’s been uploaded and vote for their favorites which will be included in a live show that’s hosted at 5:00 PM PT every day.

Cash prizes are at stake, but the real emphasis seems to be on social validation. Winners will also get a shoutout from a Musical.ly “celebrity” user and a big emphasis is put on the host shouting out users and their handles to drive attention their way. The whole design seems to take some pretty clear, erm, inspiration from HQ Trivia but the live voting component adds a more impactful community vibe to it though once users see they aren’t included amongst the finalists, it might be hard to hold onto viewers.

The startup’s efforts are going to start with a focus on the crowd that has helped catapult apps like Instagram and Musical.ly to rabid success. “We decided to go with young teenage girls because they are really obsessed with becoming famous on social media and they spend a lot of time on Musical.ly posting videos and not necessarily getting the gratification that they might want,” CTO Ruben Mayer-Hirshfeld tells me.

There are certainly some unique challenges with catering to such a young user base, especially from a safety standpoint. The company is going to curate the few videos that go into the live show, but there isn’t any screening happening in between user submission and user voting aside from a reporting button so the burden is ultimately put on a young user base to decide what crosses the line.

FameGame is just the start for the company’s ambitions. Botez tells me that there are a number of different TV show formats that seem ripe for the live social mobile elements, but that the main focus is getting excited teens on FameGame right now and seeing whether the format can catch steam and move beyond what’s out there already.

9 Signs Apple Is Being Run By Supervillains

GizmoCrazed - June 6, 2013 0
Big corporations have always been used to represent supervillains in comics and movies, and there aren’t many bigger corporations than Apple. Wondering if Apple...