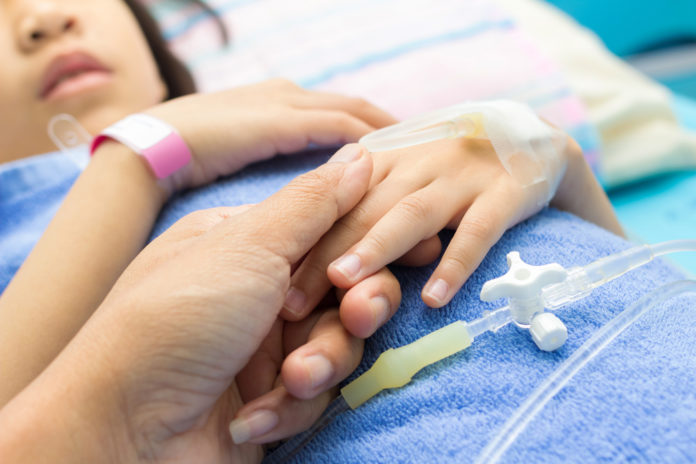 Cancer survivors often go through hell to earn the prize of simply returning to a somewhat normal life — none more so than children. But even after the cancer is gone, many young patients are still at risk for another kind of medical difficulty.

Endocrine disorders, a class of issues characterized by hormone imbalances and including hyperthyroidism and metabolic disorders, are far more common among those who have survived cancer, two papers published late last month show. Ironically, it’s a problem that’s sprung from good news.

The first paper, published in JAMA Network Open, monitored a cohort of 32,548 survivors of childhood and young-adult cancers (those diagnosed between 15-39 years of age), for a median period of around 10 years per patient. Over 2,000 patients (6.5 percent) had at least one hospital visit for an endocrine disorder. Overall, the survivors had a 73 percent higher chance of developing an endocrine disease than regular people.

While it was known that children were at risk for endocrine disorders after receiving cancer treatment, this study is one of the first to look at both children and young adults. Most studies on the health of cancer survivors have focused heavily on the latter, says lead author Mette Vestergaard Jensen.

It’s something makes their results hard to generalize to older patients, because the cancers contracted by children often look different. Jensen says that many studies have already documented an increased risk of developing endocrine disorders among survivors of cancers common to children, such as brain cancer and Hodgkin’s lymphoma, but research on older patients is slim.

In accordance with previous research, the researchers found that Hodgkin’s lymphoma survivors had the highest chance of developing hypothyroidism, a common endocrine disorder. Brain cancer survivors were at risk for a slew of disorders, particularly pituitary and thyroid dysfunction, as well as diabetes.

However, they also found that leukemia patients had the highest rate of any endocrine disease (with gonadal, thyroid, and adrenal disorders being among most common), and that overall, patients diagnosed with cancer later boasted the lowest risk of developing endocrine disorders. The results are helping to expose the true extent of such disorders among cancer patients.

“It’s been known for decades that there are increased risks in certain populations,” says Charles Sklar, an endocrinologist with Memorial Sloan-Kettering Cancer Center. What recent cohort studies like Jensen’s add are better insights into what kinds of endocrine disorders survivors of different cancers are at risk for and for how long.

Sklar is the lead author of the second paper, which estimated that 40-50 percent of childhood cancer survivors will eventually develop endocrine disorders. He used this data to draw up guidelines on improving survivors’ care for them.

The guidelines come when they’re sorely needed. “In my opinion, all types of late effects are a bit overlooked,” says Jensen. “The focus, for the last few decades, has been to increase the survival rate.” And with survival rates for many cancers jumping from around 50/50 to over 80 percent in the last few decades we’ve made significant headway toward that goal. This victory has come with its own costs, though, it seems.

Both Jensen and Sklar say that the increase in endocrine disorders among survivors is likely mostly attributable to our often harsh treatments for cancers. Though the risk of developing an endocrine disorder down the road is a gamble worth taking for many cancer patients, it can nevertheless cause harm.

“These endocrine diseases affect quality of life,” says Jensen. Many can be treated with hormone therapy, but treating them early is crucial to allowing patients to return to a normal, healthy life.

The problem with endocrine diseases, says Jensen, is that compared to other common after-effects plaguing cancers survivors (such as heart or lung diseases, or secondary cancers) endocrine diseases are not typically severe or life-threatening enough to garner the same attention — by patients or healthcare providers. Symptoms such as weakness, weight gain or loss of concentration are often simply written off as a consequence of survivorship or “chemo-brain.”

The new guidelines are meant to address the issue. They include recommendations for regular assessments of height and hormone levels for children treated for tumors in the region of the brain that contains the hypothalamus and pituitary gland and increasing screening for early-onset puberty by gauging serum testosterone and luteinizing hormone (a signal of ovulation) levels.

The guidelines also call for further research on newer cancer treatments, because, as Jensen’s paper concludes “Cure had become an insufficient goal” — especially for the most vulnerable of patients.

GizmoCrazed - December 1, 2017 0
Amazon robots and human workers together in a warehouse. Credit: Amazon Robotics Artificial intelligence will likely both giveth and taketh away jobs for humans. A McKinsey...