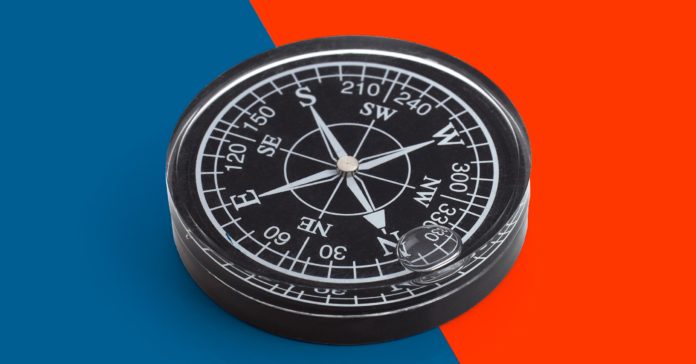 Does it matter if you put a video camera near your magnetic compass that is used for navigation? The theoretical answer is “yes.” But the practical answer? “Probably not.” Now for a detailed explanation!

How does a magnetic compass work?

Take two bar magnets and bring their north poles together. What happens? They repel each other: Like poles repel and opposite poles attract. Now go get a magnetic compass. The north pole of the compass points “North.” Why? It’s because it’s interacting with the Earth’s magnetic field. If the compass is pointing North, it’s because there must be an opposite pole of the Earth’s magnetic field that way. There you go—the Earth’s south magnetic pole is in the Arctic.

(One more fun note: The direction of the Earth’s magnetic field can have a significant component in the vertical direction—not just parallel to the Earth’s surface. In order to prevent a needle-type compass from pointing up or down it is usually weighted on one side to balance the vertical component of the magnetic field. This means that if you take your compass over to the southern hemisphere, your compass won’t work very well since the vertical direction of the field will change and throw off the balance.)

But wait! You can also make a magnetic field with an electric current. With just a D-cell battery and a wire, you can influence a compass needle. Place the wire directly over the needle and then connect it to the battery. It should look like this.

The compass ends up pointing in the direction of the combined magnetic fields due to both the Earth and the electric current. The magnitude of the field from the current is extremely large compared to the Earth’s field so it’s almost as if the it’s not even there.

First, consider the distance. If I lift the wire over the compass just a little bit, you will notice that the needle does not have as great of a deflection.

Just this little bit of distance decreased the strength of the magnetic field so that it is close to the magnitude of the field produced by the Earth. If you moved it even further away—say about 20 centimeters, you wouldn’t see any noticeable deflection.

What about the magnitude of the electric current? If you just connect a wire from one terminal of the battery to the other, you have a short circuit. This can produce fairly high currents. If instead you use a lightbulb, the electric current is much smaller. With this smaller electric current, you also get a tiny magnetic field. Check it out.

For a normal circuit, the electric current is small and the wire is far from the compass, so you shouldn’t worry about any interference.

If that weren’t convincing enough, how about one more demonstration? Here is a wire with about 2 amps of current (that’s way higher than you would have in a video camera). I placed several magnetic compasses along a meter stick so that you could see the influence of the current at different distances. The electric wire is on the right.

You can really only see a deflection with the first compass. Here is another setup with the exact same current and compasses.

Now you can barely see any compass deflection—even for the closest compass. The difference in this setup is that there are two wires on the right that are next to each other. One wire is carrying current up and the other one has a downward current. These two wires produce the same magnitude of magnetic field, but they are in opposite directions so that the magnetic fields almost completely cancel. This is how most of your electric power cords work—with two parallel wires.

So, I really doubt you will get a significant interference from a small video camera near your magnetic compass. But you don’t have to trust me. You can test it. Take a reading from the compass and then turn on the device. Did the needle move? No? Then you are fine. Or better yet, get out your phone and measure the value of the magnetic field. Yes, your phone probably has a magnetometer built into it. You can get the readings from this with an app like physphox—runs on both Android and iOS. It’s pretty nice.