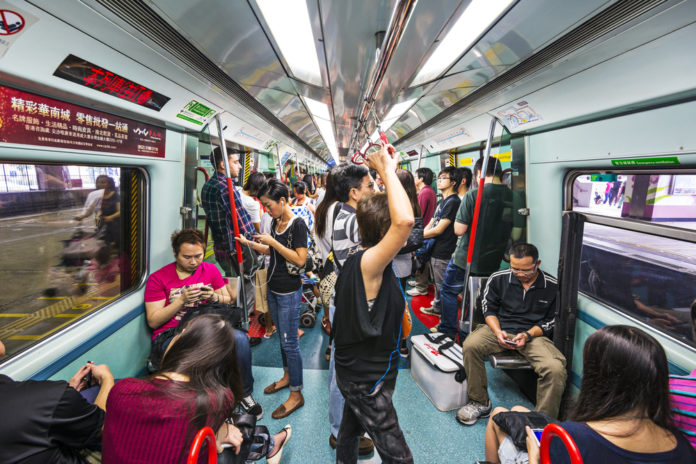 Microbes are all around us and in us and especially on us. Our skin can be both a barrier between our bodies and the microbes in our environment and a way in. Once microbes find their way onto our hands, they’re a step closer to getting inside us through our eyes, mouths, and noses.

Don’t despair. A diverse ecosystem of bacteria calls our skin and bodies home without causing us any harm at all. But some microbes do spread disease, so researchers are interested in better understanding how microbes travel through cities and populations of people.

To tackle this question and understand how geography, infrastructure, and environment in an urban setting affects the microbes we’re exposed to on a daily basis, one team studied the microbial populations commuters encounter on the metro rail system in Hong Kong. They found that different subway lines had distinct populations of microbes in the morning, but by evening rush hour, these populations had all blended together into one big microbial melting pot. The team also traced the movement of microbes with antibiotic resistance genes through the system to understand how antibiotic resistance can spread from one region to another. They present their work Tuesday in the journal Cell Reports. 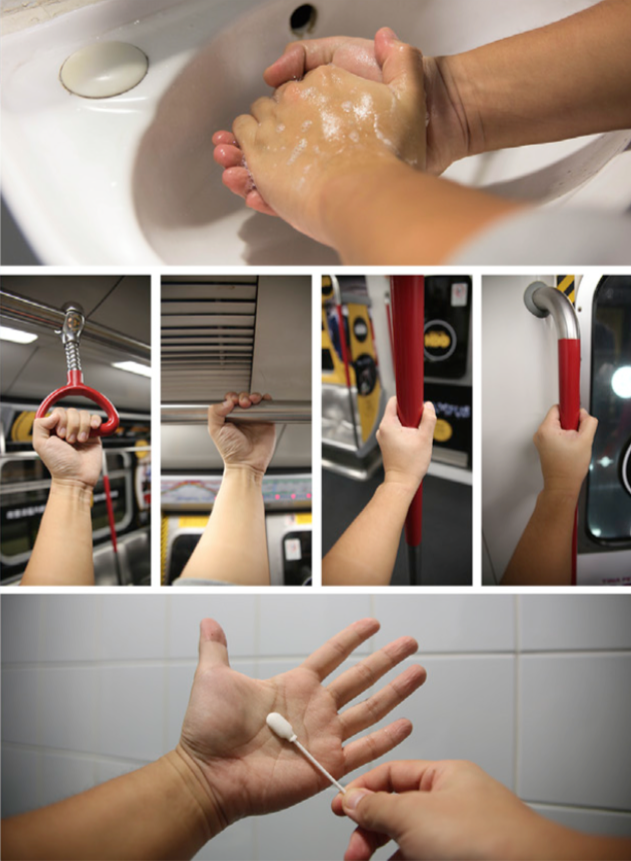 Systems biologist Gianni Panagiotou, senior author of the study, is interested in applying modern genome sequencing techniques to public health issues. For this study, his research group at the University of Hong Kong teamed up with researchers with expertise in a variety of areas like public health, ecology, and architecture to get a holistic view of how microbes interact with humans in a city. The Hong Kong metro system provided the team with a way to look at microbe populations throughout the city.

“5 million people every day are riding the metro,” Panagiotou said. “The fingerprint of the whole city must be there.”

For the study, the team had volunteers ride the subway for half hour chunks of time during morning and evening rush hours to simulate a realistic commuter experience. The volunteers were instructed to hold onto one of the hand rails in the train car throughout the ride and swab their hands after the ride to collect the microbes that had transferred onto their hands. While past studies of microbes on rail systems sampled airborne microbes or microbes on surfaces in trains or train stations, Panagiotou’s team wanted to see what microbes transferred onto riders’ hands to study how microbes on subways might affect human health more directly.

They sequenced the DNA of the microbe samples and found that the microbes riders encountered were very dependent on time. In the morning, riders of different subway lines had different groups of microbes on their hands that seemed to be from the environment surrounding those subway lines and the kinds of infrastructure the lines were connected to. But in the evening, riders of all lines had a similar collection of microbes on their hands — a mix of the microbes found throughout the different subway lines, but especially a lot of microbes that typically live on human skin. Even though metro employees on the Hong Kong rail system were cleaning train surfaces that people touched throughout the day, the flow of human traffic throughout the subway system was spreading microbes along with it.

The Spread of Antibiotics Resistance

The Hong Kong metro system also provided the researchers with a unique opportunity to study how public policies can shape the flow of antibiotics-resistant bacteria. In the Hong Kong metro system, one of the lines the team studied connects to Shenzhen, a city across the border in mainland China, where using antibiotics in raising pigs is common. When the team looked at how antibiotic resistance genes traveled through the metro system, they saw that the subway line connecting Hong Kong to Shenzhen had a lot more microbes resistant to antibiotics than other lines — in the morning. In the evening, these microbes were distributed throughout the metro system like all the others. This could be a big concern as bacteria becoming more and more resistant to antibiotics we throw at them. Bacteria often spread these immunities to each other, and the farther they travel, the more this resistance can spread.

“The two countries have very different policies regarding antibiotic usage and it was therefore interesting to observe a significant higher load of antibiotic resistant genes in the line that crosses the borders,” Panagiotou said.

Panagiotou hopes this study will serve as a framework for more studies of the connections between urban structures and the spread of microbes in the future. Public policies and urban design have a very real impact on how microbes spread through our cities and communities.

“The idea for these projects is not to scare people,” Panagiotou said. “It’s more to realize that we are constantly exposed to diverse set of bacteria and also accept that how do we design our cities can have a significant impact on the type of bacteria that we will encounter.”

GizmoCrazed - October 8, 2013 0
iPhone lovers and owners are always looking for the perfect accessories for their gadget obsession. Here are 10 of the most interesting, and a...

The self-contained Fusion electric guitar lets you truly rock out

23andMe Is Suing Ancestry Over Some Pretty Ancient IP