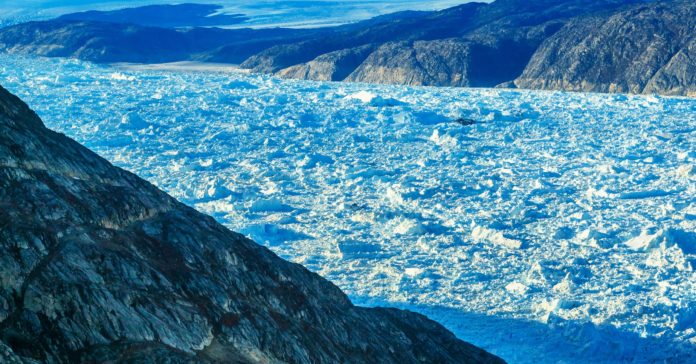 One of the first things you notice about videos of calving glaciers is the utter absence of scale. The craggy chunks of ice that break away could be the size of football fields or cities or maybe even whole states—but without a point of reference it can be next to impossible to say. They are unintelligibly immense.

That perceptual effect happens in person, too. “There’s no real way to determine its size just by looking at it,” says New York University oceanographer David Holland, whose research team has spent a decade observing glacier behavior in Greenland. A distant, dislodged iceberg might look small at first glance, “but then you’ll watch a helicopter fly towards it, and the helicopter will shrink and shrink and shrink and pretty soon it just disappears.”

Which is why you probably can’t tell that the newly born berg in this time-lapse video is in fact 4 miles wide, half a mile deep, and over a mile long. A sizable chunk of Greenland’s Helheim glacier, it’s roughly the size of lower Manhattan and weighs between 10 and 14 billion tons. When it dislodged from Helheim and crashed into the ocean on June 22, it accounted for some 3 percent of the ice that Greenland is expected to contribute to the sea in 2018 in the span of just 30 minutes. Much of Greenland’s ice deposits will occur in dramatic, short-lived events such as this.

That’s exactly why this video is so valuable to Holland, whose research team is studying how calving glaciers could contribute to catastrophic sea-level rise across the globe. “Abrupt sea level change is only going to happen one way, and that’s with some big part of western Antarctica becoming violently unstable due to calving—or not,” he says. “If not, then there will not be major, abrupt sea level changes.” And to model whether and how Antarctica might fall apart, you need to understand the rate and processes by which ice breaks off. Greenland’s icebergs—including Helheim—serve as fabulous natural laboratories.

Glaciers often shed pieces of themselves, but only rarely do researchers capture large events on camera. In the course of his career, Holland has seen it happen just three times. (The largest calving ever filmed was shot during the production of the documentary Chasing Ice, on the 17th day of a glacier-watching stakeout.) “You can be out in the field for two weeks with your camera on and the glacier just sits there doing nothing,” says Denise Holland, David’s wife and the logistics coordinator for NYU’s Environmental Fluid Dynamics Laboratory. But that kind of documentation is essential to understanding—and modeling—how and why glaciers calve.

Consider the video above, which begins with a big, so-called “tabular” iceberg breaking off from the main part of Helheim glacier. Almost immediately thereafter, a second type of iceberg, called a “pinnacle” iceberg, can be seen calving off toward camera right. The tabular iceberg is built like a pancake: large, flat, relatively stable. But the pinnacle berg has an aspect ratio like a slice of bread. Tall and skinny, it wants to lie down, and so as it separates from the iceberg from the bottom first, its feet shoot forward out from under it as it slides into the sea. Sheets of pinnacle icebergs proceed to rip off from the glacier in sequence, driving the tabular berg further down the fjord and breaking it into smaller chunks. “It’s like a house of cards, one piece falls off and the rest of the pieces peel off one after the other,” David says. “It’s complete chaos.”

That chaos can be difficult to model. Look closely and you’ll notice that not all of the pinnacle icebergs in this video detach from the bottom first. Some separate from the top, reflecting a different type of structural failure. Different structural failures occur at different rates. If you don’t know what those rates are, it’s hard to say how accurate your models are.

“If you’re going to project sea levels, you need to pass through the eye of the needle first and get the delivery of ice to the ocean correct—and that’s not possible right now,” David says. “It could be in the future, with more observation and more modeling, but this event had too much going on for anyone to responsibly say they could predict or understand what happened.”

Until that future arrives, we’ll have video like this one to remind us of the enormous complexity—and just plain enormity—of calving glaciers.