A Major Victory for the Impossible Burger, the Veggie ‘Meat’ That Bleeds 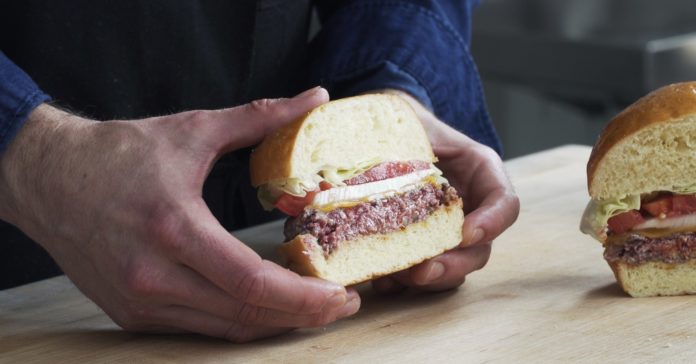 The Impossible Burger seems too good to be true—an entirely plant-based “meat” that looks and smells and tastes like beef (at least, according to some folks). Hell, it even bleeds like meat. That’s thanks to a yeast modified to carry genes for the soy leghemoglobin protein, which you’d normally find in the roots of soy plants. The engineered yeast can then churn out a vegetarian version of heme, the metallic-tasting substance you also find in your blood and muscle.

It’s a highly engineered food that Impossible Foods, which makes the burger, voluntarily submitted to the FDA in 2014 for what’s known as a GRAS review, or “generally recognized as safe.” Essentially, the submission said: for these reasons, we consider this novel food to be fit for human consumption. It didn’t get the response it wanted. In the summer of 2015, the FDA came back with questions—not necessarily calling soy leghemoglobin unsafe, but certainly looking for more safety information.

Impossible Foods pulled its notice and resubmitted with additional safety studies done on rats. And on Monday, in a win for the faux meat startup, the FDA came back with no further questions. “Based on the information that Impossible Foods provided, as well as other information available to FDA,” the agency wrote in a letter to the startup, “we have no questions at this time regarding Impossible Foods’ conclusion that soy leghemoglobin preparation is GRAS under its intended conditions of use to optimize flavor in ground beef analogue products intended to be cooked.” Meaning, the FDA needs no further clarifications on Impossible Foods’ arguments that consuming soy leghemoglobin in the Impossible Burger will not have adverse impacts on human health.

While the FDA has been evaluating the GRAS notice, the Impossible Burger has been in a limbo of sorts—not banned and not considered unsafe, but not explicitly considered safe either. “From a legal standpoint, it doesn’t change anything because we’ve been free to do it all along,” Impossible Foods founder and CEO Pat Brown told WIRED after Monday’s ruling. “But from a perception standpoint, it’s really important.”

The Impossible Burger’s journey through the voluntary GRAS process, though, has riled environmental groups like Friends of the Earth. “The FDA’s outdated regulatory processes have left the agency ill equipped to properly assess the safety and sustainability of new genetic engineering applications, like Impossible Foods’ genetically engineered heme,” says Dana Perls, a senior food and agriculture campaigner with FOE.

To be clear, there is no reason to believe GM foods are across the board dangerous. Should the feds so choose to scrutinize a GM food, they evaluate it on a case-by-case basis. Impossible Foods, after all, never had to get FDA approval to introduce soy leghemoglobin, a novel ingredient, into the food supply. And even after the FDA came back with questions about the safety of that ingredient, Impossible Foods could keep the product on the market (now in 3,000 locations). “The FDA should be the authority when it comes to determining food safety, but their inadequate methods negate any decisions the agency makes regarding safety and sustainability,” says Perls.

For Impossible Foods’ part, the company went beyond what was required from a regulatory perspective. And sure, that was in part to assure consumers, so they can sell more burgers. “Getting a no-questions letter from the FDA is a big win for Impossible Foods—and for science, people, and the planet,” says Brown. “While I always anticipated receiving a no-questions letter, I have been consistently impressed by the FDA’s diligence and eagerness to dive into the science behind our test data.”

While soy leghemoglobin occurs naturally in the roots of the soy plant, humans don’t typically eat those roots. Thus you could argue it is indeed a novel ingredient in the food supply. But Impossible Foods has argued that in addition to its own safety testing on soy leghemoglobin, the stuff should be considered safe because it’s structurally similar to proteins that humans already eat. That’s one of the things the FDA took issue with when it at first questioned the GRAS notice in 2015.

Like us consumers, the FDA is trying to make sense of the evolving nature of food. The Impossible Burger is the product of just one meat-engineering strategy. Other companies are growing meat meat, not plant “meat,” in the lab from small samples of animal cells. And in that field, the FDA is being more proactive. Earlier this month it convened a public meeting about lab-grown meat, which turned into semantic bickering about what meat even is.

“We’ve only known one way to produce meat up until now, and that is from the corpse of an animal,” says Brown. “But it’s no more true that that’s the only way to do it, than if you had said 200 years ago the only way to make a wheeled vehicle move is to hitch it to a horse.”

It’s the next two decades that are going to get really interesting for Impossible Foods: Its goal is to completely replace animals in the food system by 2035. That means expanding into ever more markets outside the US, and running into more regulators abroad, and reverse-engineering-with-plants the flesh of other animals beyond cows. That’s a lot of cooks in the kitchen.