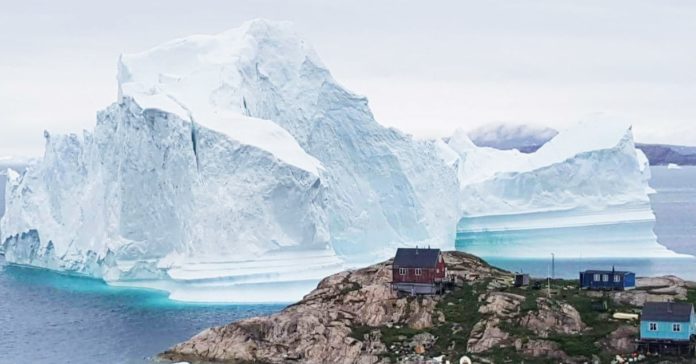 When an iceberg breaks off from a glacier, it can drift for thousands of miles, traveling freely across the open ocean. But last week, an iceberg’s journey was interrupted when it got stuck on a shallow part of the seafloor along Greenland’s western coast.

In other words, the iceberg was grounded—and it had lodged itself right beside the small island village of Innaarsuit. Such grounded icebergs are actually pretty common, says Fiamma Straneo, who has traveled about 20 times to Greenland’s ice sheet for her work at the Scripps Institute of Oceanography. What’s unique about the iceberg by Innaarsuit, which has a population of less than 200, is both its size and its proximity to the village.

A grounded iceberg experiences ocean water pushing at it in one direction and the seafloor pushing in another—a tug-of-war that makes it easy for limbs to break off with a splash that can rock boats or flood coasts. The iceberg might even do an entire somersault in the water. Across the world, from the Canadian Arctic to Patagonia in Argentina, that shedding is both a tourist attraction and an issue of concern. The larger the iceberg, the larger the waves it causes if it breaks apart—and the Innaarsuit iceberg rises about 300 feet above the water, according to a Danish meteorologist quoted by the Danish broadcaster DR. The iceberg that felled the Titanic is thought to have risen a mere 50 to 100 feet above water.

What happens with a grounded iceberg is almost luck of the draw, says Margaret Lindeman, a PhD student also studying the Greenland ice sheet through Scripps. Perhaps only a small chunk of ice will fall off the iceberg; maybe a little piece will break off the bottom, allowing the iceberg to lift off the seafloor and drift away. Or maybe the whole canyon of ice will implode, causing the sort of flooding feared by villagers in Innaarsuit. Dozens of them evacuated on Friday from their lower-lying homes.

Greenland’s steep, rocky western coastline is often treated to a procession of icebergs drifting through the water, the number of which has increased since the 1990s, likely due to ocean warming. Many villages are perched on flatter areas atop cliffs, out of the flood zone—but there are still fishing boats, marinas, and boat fuel-stations at the edge of the water. All this infrastructure gets damaged from time to time by grounded icebergs, Straneo says, even if the village itself does not need to be evacuated.

The disintegrating icebergs also pose a problem for scientists. When Straneo and Lindeman collect ocean measurements off their boat, they never get too close to the iceberg. There’s too great a chance that a piece will break off and smash the boat, or that the iceberg will capsize. So instead, they send a remote-controlled robot resembling a bright yellow kayak through the icy water to collect data on temperature and salinity.

For others, the splashes of the iceberg are a spectacle. Illulisat is a village and Unesco World Heritage site further south from Innaarsuit on Greenland’s western coast. Close by, a cliff of ice routinely sheds chunks into the water, generating dramatic waves that tourist boats travel to see. It’s the job of the boat captain to carefully time the tourists’ exit onto shore. Even so, sometimes a piece of iceberg falls off as they disembark, and passengers get doused as they scramble off the boat.

Back in Innaarsuit, the Danish broadcaster DR reported that the iceberg was blown by winds a few hundred meters away from the island over the weekend; today, some evacuees were given the all-clear to return home. But the homes and streets within 10 meters from the coast are still off-limits, along with a convenience store, fish factory, and power plant. As Innaarsuit’s villagers settle back in, they’ll be keeping a close eye on the iceberg’s next great migration.