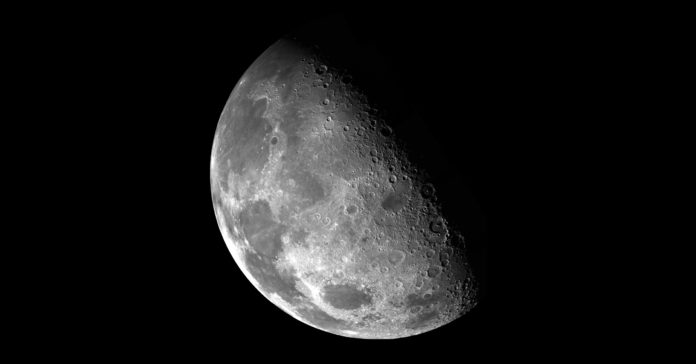 Let me note that this analysis is inspired by Andy Weir’s recent novel Artemis. I’m not going to spoil the plot except to say there is a girl that moves around on the moon. Weir does a pretty nice job describing what would be different about moving on the moon as compared to the Earth.

What is different about the moon compared to the Earth? The biggest difference is the gravitational field on the surface. On the Earth, the field has a strength of 9.8 Newtons per kilogram (we use the symbol g for this). This means that a free falling object (no air resistance) would have a downward acceleration of 9.8 m/s2. On the moon, the gravitational field is about 1.6 N/kg, so that the vertical acceleration of an moon-object would be much less than one on Earth.

There is another important difference with the moon: It doesn’t have any air. If you are a human jumping, that might not be a big deal; an Earth-bound jumping human doesn’t move fast enough for air resistance to play a significant role. However, on the moon that same human would probably want to wear a spacesuit. This suit would both increase the effective mass and decrease the range of motion for a moving human. Oh, if there is a moon base there would probably be air inside of it so that you wouldn’t have to wear a spacesuit unless you just thought it looked cool (it would).

Jumping on the moon

I will start with the easiest motion—jumping straight up. Let’s say that during a normal human jump, a human pushes on the ground with some maximum force over some set distance. This distance is from the lowest position in pre-jump squat, up until the feet are no longer in contact with the ground.

Now for some starting values (you can change these if you like). I’m going to say this maximum jump force is three times the weight of the person (the weight on Earth) and the jump distance is 15 centimeters—that’s just a guess. With these values, I cannot model the motion of a jumping human on Earth. I’ll just calculate the total force as either the upward pushing force plus gravity while “in contact” with the ground or just gravity after that. It should be a fairly straightforward numerical calculation.

For a jumping human on the moon, I am going to make a few changes. Obviously the gravitational field will change—but also some other things. I’m going to assume the human is wearing a spacesuit, so this will increase the total mass (but not the max jumping force). Also, since a spacesuit is bulky, the jumping distance will also be smaller. OK, let’s get to it. Here are two jumpers (moon and Earth). If you want the code for this calculation—here you go.

Here is what it would look like (using spherical humans for simplicity).

Also, here is a plot of the vertical position of both jumpers.

A few things to notice. First, the Earth jumper starts off with a faster speed. Why? Because the moon jumper has more mass (spacesuit and stuff). Second, the moon jumper both goes higher and stays off the ground for a much longer time because of the lower vertical acceleration.

But wait! How about a real video of a moon jump? Here is a video of John Young’s famous “jump salute” during the Apollo 16 mission.

Pretty cool—but without a spacesuit, a human could probably jump even higher. Here is an old NASA film of a jumping human in simulated moon-gravity. NASA’s method (very creative) to simulate moon-gravity is to have the a human suspended mostly horizontal by strings and then move on a mostly vertical surface.

Running on the moon

It’s not really a spoiler, but one of the first scenes in the book Artemis has the main character (Jazz) out on the surface of the moon. For some reason (read the book), she starts running quite fast in her spacesuit. So, what would it be like to run on the moon?

Yes, there exists video of actual astronauts moving in a manner that could be considered “running”—but I still want to model this motion. I previously built a model of a running human and now I can just change some stuff to adapt it for the moon. Here is my previous post on a running human model. Some key points aspect of this model (remember, it’s still just a model).

But what about running on the moon? The big difference is time. Since the gravitational field is small, the human will be in the air for a much larger time with a smaller vertical push force. This means that more of the max force can be used in the horizontal direction to increase the horizontal speed.

OK, but what about a plot? Here is my running model on both the Earth and the moon. I increased the mass of the moon-human to simulate a spacesuit and I also increased the “stride time” the human is off the ground to account for a bulky suit that would require more leg swinging time.

Here is a plot of the velocity as a function of time for these two runners.

The Earth-human gets to a speed of almost 10 m/s, but the moon-human easily can go over 15 m/s. But wait! It’s even better. This is assuming the same kind of running style for both gravitational fields. However, on the moon it’s very possible that there are more efficient running styles that take advantage of the low gravitational field.

It’s probably not very surprising that people have already explored the idea of running in low gravity. Just check out this NASA test using the same “horizontal running” rig as in the jumping video.

Oh, there’s also this interesting paper looking at theoretical and simulated running speeds on the moon—“The preferred walk to run transition speed in actual lunar gravity”, from the Journal of Experimental Biology. For that study, they put actual humans on treadmills while in a plane flying in parabolic paths to create lower apparent weight. But really, who knows how it will really work until we get serious about being on the moon.

Running in a straight line might be fun for some short amount of time—but if you want to really maneuver around you are going to have to turn at some point. Would turning on the moon be different than on Earth? Of course. Let’s consider a human running in a circle on the surface of the Earth. Here is a top and side view with a force diagram.

The key idea here is that you need a “sideways” force in order to make a turn. The direction of this turning force is towards the center of the circle you are turning in. Also, the magnitude of this force depends on the running speed and the size of the circle in the following manner.

So, faster running speed means a bigger force and a smaller radius (sharper turn) also means a bigger force. The force that pushes the human into a circular path is the frictional force between the feet and the ground. But of course you already know that—if you try taking a turn on low friction ice it doesn’t work so well, does it?

Here’s the last important point—the magnitude of the friction force is proportional to the force with which the ground pushes up on the human. In the case of maximum friction, the magnitude would be: