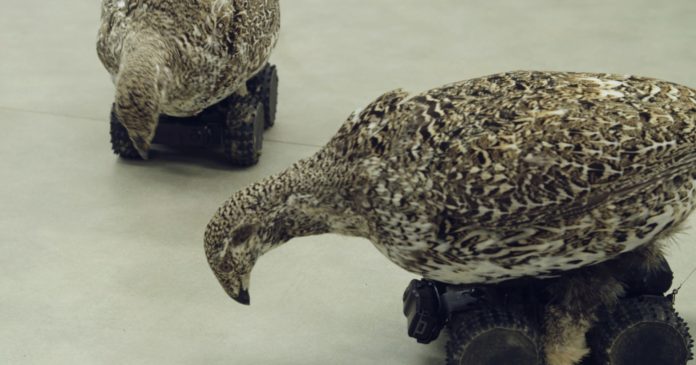 This would be a whole lot harder if biologist Gail Patricelli didn’t have an excellent sense of humor. Because I’m expected to sit here like a professional and not guffaw at her invention: A real-life fembot, which is probably not what you’re imagining but instead a taxidermied bird stuck on wheels. It tears around a table in her lab, turning its head back and forth, stopping periodically to bend up and down, as if pecking at the ground. Patricelli laughs as she steers it around, which I take to mean I’m allowed to laugh too.

The fembot (Patricelli’s name for the contraption) is serious science, though, a machine that’s helping her tease apart the wild—and wildly complex—mating ritual of the sage grouse, a species under threat. Because it turns out it’s pretty easy to trick a male sage grouse into trying to mate with a robot.

The male sage grouse is perhaps the only thing more absurd than a female robotic sage grouse. When they gather to display in a mating arena known as a lek, they sound more like sci-fi than anything remotely bird-like—a shreeet of a passing laser blast, and a low pop of, well, your guess is as good as mine (see video above). Males also inflate patches of thin skin on their chests. “They have a whole bunch of muscles on their chest that allows them to manipulate this like an elaborate balloon animal show,” Patricelli says.

Females are comparatively drab, which makes turning one into a convincing robot easier, though far from simple. It begins with a specimen that met an unfortunate end by way of car or powerline. Meaning, it’s going to need some reconstructive surgery. “I do my best to try to make it look realistic,” Patricelli says. “I have learned a lot and spent a lot of time in the arts and crafts section.”

Her lab’s first-generation fembot rolled on model train tracks, but ended up getting stuck when quarreling males would kick dirt onto the rails. The next generation got off-roading tires. “They can move around and peck on the ground and look uninterested in mating anytime soon, or they can remain more upright looking back and forth looking like they’re getting closer to being ready to mate,” says Patricelli.

Males fall for it, and hard. Which maybe isn’t saying much. “When there are no hens around, they often try to mate with dry cow pies,” says Patricelli. “So the bar’s pretty low for us to fool the males.”

Still, if Patricelli rolls a fembot up and it doesn’t move naturally (the tires might seem like a giveaway, but you’d actually have a hard time seeing them on a grassy plain), males will spook and fly away. But by loading the already-realistic-looking fembot with complex behaviors, Patricelli can use it as a consistent stimulus to test a whole field of males.

See, Patricelli’s got a theory. To help understand the complex dynamics of sage grouse mating, she’s turned to economic models of negotiation, specifically the idea of an allocation decision, in which males are limited by how much energy they can spend on courtship.

“You can’t help but think of a big open air bazaar, with a bunch of vendors out there that are all trying to sell their wares,” says Patricelli. Those would be the males. “They all want the customers to come visit them.”

The males have to keep an eye not only on potential patrons, aka picky mates, but on other vendors, their competition. If one particularly attractive male seems to be getting a lot of business, other females will take notice, not unlike a farmer drawing a crowd at a market. “We had our top male mate 37 times in one morning, and 23 of those matings were in a 23 minute long period of time,” says Patricelli. “So they’re not looking for a long-term relationship.” Males, though, also have to choose who they court wisely, given how elaborate and energetically costly their displays are.

Patricelli can test this dynamic with some good old robotic trickery. “We send the robot out and have her not looking particularly interested in the male,” she says. This gets the male courting. “Then we have what’s called an outside option in economics, where we have another hen heading out, and the male now decides whether to continue investing in that first courtship effort or shifting gears and focusing on trying to convince that second female to mate.”

“In economic theory, you’d predict that he would only make that adjustment if the second hen is more valuable than the first one,” Patricelli says. With the fembot, the team can manipulate the visual signals the robot is giving to signal interest or non-interest, in order to test that hypothesis. (Results forthcoming—she and her team are still collecting data.)

Patricelli isn’t just exploring sage grouse mating dynamics, but the impacts environmental changes have on the lek. For one, the team has been trying to figure out where the sage grouse are most comfortable. Food availability in particular is a major concern. “We’ve done some experiments with her where we’re looking at how they’re foraging, and where they’re foraging affects what happens on the lek,” says Patricelli. “That helps us understand the basic courtship dynamics, but it also gives us a better idea of what makes good sage grouse habitat.”

And boy, do they need it. Sage grouse habitats are being infiltrated by cheatgrass, an invasive species that grows thick—unlike native sagebrush, which grows spotty—which can fuel massive wildfires that destroy their homes. Habitat degradation has cut the sage grouse’s numbers from 16 million to around 200,000.

Add to that human development, which brings both physical destruction of environments and the attendant noise pollution. But Patricelli’s study of the birds’ sensitivity to noise on their leks has actually helped land managers consider better rules to ensure the birds can strut their stuff undisturbed.

Perhaps one day, all the sage grouse will hear out on the lek is the quiet whine of a fembot turning its head. Long live the future.

GizmoCrazed - February 20, 2020 0
The development of technology is moving upward, with automation being the critical factor in future devices. Self-driving cars and automated data systems are now to be...

Carbon Taxes Are Coming, and We Have Colleges to Thank

What Makes Screams So Bone-Chilling?

One Scientist Hopes to Engineer the Climate With Antacid